Heritage of the Desert (Paramount, 1932)

In the 1920s Paramount made a series of silent Westerns based on Zane Grey stories, to which Jesse Lasky had bought the rights. In the 1930s many of these were remade as talkies, and because several were directed by a young Henry Hathaway, were shot by Archie Stout and starred a young Randolph Scott, they were actually quite good. One such was Heritage of the Desert (later re-released as When the West was Young), which had been made in 1924, directed by Irvin Willat and starring Lloyd Hughes as the hero and Noah Beery Sr. as the bad guy. In 1932, the fun 65-minute talkie version came to the screen. (Like many of these low-budget pictures, it would again be remade, in 1939). 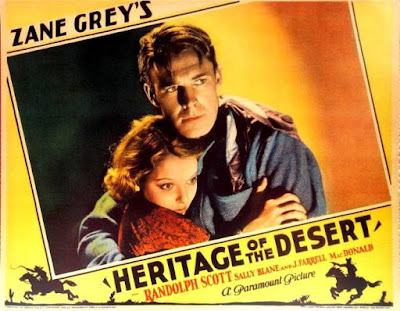 Randy rides the sage for the first time
Scott was at the very start of his career (this was his first starring role and first Western, and Wild Horse Mesa followed hard on its hooves the same year). He was, of course, to become one of the greatest ever cowboy heroes, in a splendid series of 64 Westerns that went right up to Ride the High Country in 1962.  But in ’32, though already in his thirties, he was still gauche and inexperienced as a Westerner, if handsome (he was always that: he was one of those men who got more beautiful as he aged). Then, he had a light touch and was good with a comic line but he didn’t really do serious emotion and he showed few signs of the tough, six-gun packing Westerner. In Heritage of the Desert (which only has little to do with heritage or a desert) he wears a bad hat, has no gun (he is a surveyor) and from his first appearance allows himself to be bamboozled like a tinhorn. He trusts the villains repeatedly, loses a fistfight and allows himself to be suckered into the desert to die. This character was very far from the hombre who would face down the hard-as-nails bad guys in the Budd Boetticher Westerns of the 1950s. 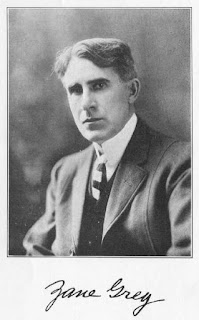 I wonder what he made of it
Still, the movie is a lot of fun. Norman Houston and Harrison Jacobs whipped up the screenplay from the (much changed) Zane Grey novel and it contains a few good lines. In particular the villain, Judson Holderness (David Landau) is fleshed out as a character with a bit of light and shade, and he has a few blackly humorous lines. When he threatens to blackmail the ne’er-do-well son (Gordon Westcott) of the good rancher by telling daddy of the boy’s misdemeanors, the son stutters, “You wouldn’t do a thing like that, would you?” and Holderness replies, “I do things like that every ten minutes.” He is obviously the bad guy because he wears a suit, owns a saloon and wants the whole valley for his rustled stock. Landau was a popular character actor of the period but this was his only Western. Pity.


The ne’er-do-well has a good name, Snap Naab, but he speaks in a Cagneyesque hoodlum way, ending his threatening sentences with “…see?”


The heroine – meant to marry the ne’er-do-well but falling instead for Randy – is Sally Blane, who is delightfully pretty. She was in fact one of Loretta Young’s sisters, and just as talented and beautiful. Hathaway makes the most of this aspect of the story. 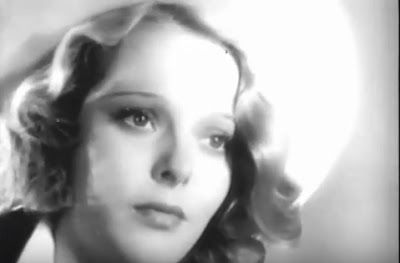 Beautiful heroine has Stetson like a halo
There is probably too much comedy, though. This played to young Randolph Scott’s strengths but didn’t make for a top-class Western. Guinn ‘Big Boy’ Williams (billed without the ‘Big Boy’) is the bad guy’s dumb-ox henchman while the good rancher has a comic idiot ‘Mexican’, Windy (Vincent Barnett), who mangles English in a way thought to be frightfully amusing. 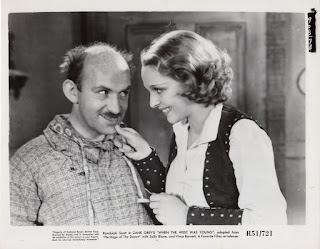 Too many 'comic' characters and scenes
Even in this 30s second feature there’s some noticeably good Hathaway/Stout imaging. A few shots stand out as really quite classy. The print today is a bit the worse for wear though, sadly, and jumps a bit. 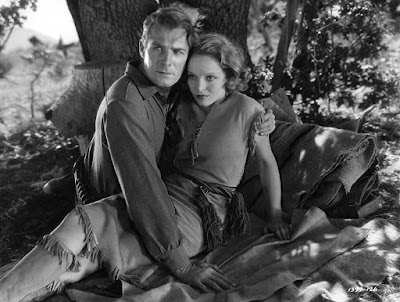 Watch out for that bear
It’s worth quoting at some length (and I am endebted to the enjoyable The Films of Randolph Scott by Robert Nott for this) the very entertaining story about one episode in the movie, a laughably bad bit where Randy on a clifftop saves the heroine from a bear. Henry Hathaway claimed that editor Billy Shea had wanted to direct the movie and got even with rival Hathaway by ruining the scene. Hathaway wrote:


Number one, I can’t find a canyon with a precipitous cliff where we were shooting in Arrowhead because there’s just no such thing. It’s just all rolly up there. So I said, ‘I’ll get the sheep and the meadow stuff in Arrowhead and do the reverse direction in the studio against rear projection. They wouldn’t let me go out to shoot the canyon background. On the stage they built a rock out of cloth and it sagged and wiggled. They put it on the back project, and instead of a little canyon, it was the Grand Canyon!


They had the set with the fake rocks out of the canvas, and we had a trained bear, but as soon as the bear put one foot on the damn thing he wouldn’t get up on the rocks. They brought [producer] Harold Hurley in and he says, ‘Get [stuntman] Billy Jones and put him in a bear outfit and let him go up.’ So we had the Grand Canyon in the background and Billy Jones as the phony bear, which always shows, and the set sort of wobbles. Scott comes up to him and shoots him and it looks like a man getting shot and Randy comes to pick up Sally and his foot goes through the cloth rock.


At the preview, the audience started to laugh at the beginning of this scene and by the end of it were roaring. Editor Shea had deliberately stayed on the shot. Hathaway got his revenge, though:


In the lobby I poked the son of a bitch right in the jaw.


Shea was replaced, the scene edited and in the version most of us see today it’s still hopelessly corny but at least Randy doesn’t get his foot stuck while holding Sally. 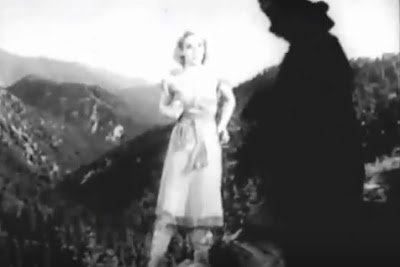