“The contempt in which all concerned must have held their audience should not be encouraged by willingly viewing this drivel.” Brian Garfield, as so often, is spot-on with this judgement. The fault lies mostly with Frank Sinatra and Robert Aldrich: Sinatra because although we all know he could act really well, we also know that he usually didn’t bother, lazily dashing off scenes and refusing to do retakes, with complete and cynical disregard for the audience, and Aldrich because he allowed it. Sinatra did five Westerns, all very bad. Aldrich directed six Westerns, but only one of them was good (Ulzana’s Raid); a couple were just about OK though flawed (The Last Sunset and Apache); one was an overblown farrago (Vera Cruz); and two were absolutely dire (The Frisco Kid and 4 for Texas). Aldrich co-wrote and produced 4 for Texas as well as directing it, so should come in for a good chunk of the blame.

Of course everyone loves Dean Martin. Not only did he have the voice of an angel drinking honey (tragically he does not sing in this movie) but he also had a twinkle in his eye and he was the living embodiment of the word simpatico. But even he is clearly just going through the motions here, probably taking his cue, as per usual, from Sinatra. 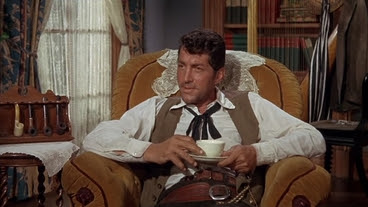 Dino drinks tea?
Two and two make four, and the other couple of the title are, to complement Sinatra and Martin, the mammary marvels Anita Ekberg and Ursula Andress. Both were dreadful actors (especially Ekberg) and the idea of Sinatra’s spindly character falling for the huge, overweight Ekberg, wobbling fatly across the set, is ridiculous. 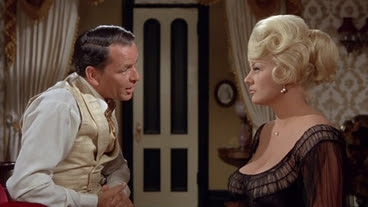 Sinatra probably standing on a box
It’s set in Galveston and tells of two rival gamblers and saloon owners. Charles Bronson is the bad guy (or even-worse guy one should say because there aren’t any goodies) and Bronson’s acting ability fits right in with that of the bigger stars – i.e. none was shown, if indeed, in certain cases, any ever existed. Any decent actors are wasted: Bronson shoots Jack Elam even before the opening titles have finished. One-Reel Jack was used to getting killed early in a Western but this is silly. Hardly worth turning up. (He did it again in Once Upon a Time in the West but at least that opening was longer and gave Jack a chance to shine). Richard Jaeckel and Bob Steele appear briefly but sadly are also squandered in bit parts. 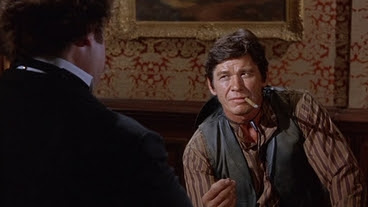 
And why on earth did the movie have to have a runtime of over two hours?


The only good thing is that there are quite a few derringers.


4 for Texas is complete junk, an early 60s commercial Western of the worst kind, and should be avoided at all costs.