At first sight this movie looks like a late-1940s black & white cops & robbers drama, and purists won't consider it a Western at all. The opening frame shows (then) modern trucks in a city street and we see John Ireland in suit and tie. Is he a hoodlum? He looks like one (but then he always did). Is he a cop? No, he’s a private eye. He’s being paid by a father to find a son’s murderer. So you think we’re in for a classic noir. And we are, in some ways, but as soon as the plot gets past the first scenes, and the band of ten goodies, baddies and in-betweenies ride out of Calexico/Mexicali into the desert, we realize we’re in for a Western. A contemporary Western, but a Western.


In fact the goodies (Randolph Scott, an Indian, the girl) wear cowboy hats while the others wear more modern headgear. Symbolic, huh.


The pedigree of The Walking Hills is pretty good: produced by Harry Joe Brown (with Scott), written by Alan Le May, directed by John Sturges and starring Scott, Ireland, Edgar Buchanan and Arthur Kennedy, with Ella Raines as the female lead, the movie shaped up to be good from the get-go. And it is. Former theater actor and director Brown moved to Hollywood and in the 1930s directed for Universal first, then Paramount, before moving into producing. He partnered up with Randolph Scott and together they were responsible for some first-class movies, notably the Budd Boetticher-directed Westerns of the late 1950s. 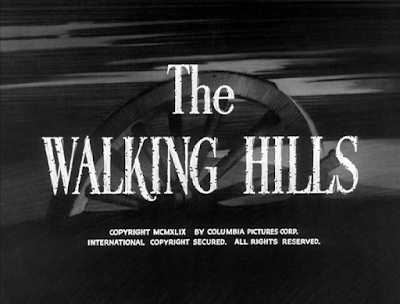 Classy contemporary Western
Le May is of course very well known as a novelist. The Searchers and The Unforgiven, both absolutely superb Westerns, were based on his stories, and he wrote original screenplays for other oaters such as North West Mounted Police, San Antonio and Cheyenne. He also wrote TV Western shows. He did an excellent job on The Walking Hills, bringing in tension, developing character and pulling off the difficult trick of balancing a fairly static, almost play-like ensemble with Western action.


Director Sturges will be always honored in the halls of Valhalla (whither he departed in 1992) for The Magnificent Seven, one of the greatest Westerns of all time, of course. But don’t forget he also did Bad Day at Black Rock, so he knew all about ensemble pieces of tense character interaction bursting into violence. He also directed one of the most famous Westerns of all time, Gunfight at the OK Corral. It is true that he is 'credited' with some downright bad oaters (Sergeants 3, The Hallelujah Trail, Chino) but all in all his record was pretty damn good. I am a great fan of Escape from Fort Bravo, for example, and Joe Kidd. 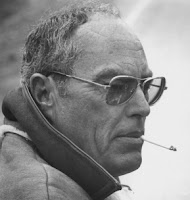 John Sturges
As to the cast, Randolph Scott was developing into a superb (and much underrated) actor, capable of great subtlety, transmitting a persona of stoicism, compassion and authority. He was ideally suited to intelligent Westerns. In this movie he is an ex-rodeo star more concerned with his mare in foal than either girl or gold. He is quiet and restrained but steely when it's called for. Two moments in particular show his strength: when the PI (Ireland) shoots a young man, member of the group (Jerome Courtland), Randy says, "If that boy dies, you better hold on to your gun" in a way that seethes with menace, and when he slaps an hysterical Kennedy and knocks him to the floor, Ireland asks, "What did you do that for?" and Randy quietly rolls a cigarette and answers, "I ran out of words." Scott brilliant underplayed his parts in an almost Gary Cooperish way, and although he in fact has less screen time than some of the other actors, he dominates the picture completely.

I’ve always liked John Ireland, especially as the tough guy, and while most of his Westerns were B-movies or TV shows, we shouldn't overlook the fact that he started off in My Darling Clementine and Red River, two of the greatest Westerns of all time, and he was Johnny Ringo for Sturges in OK Corral. 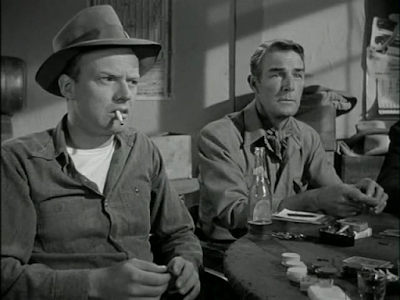 Kennedy and Scott play penny-ante
Regular readers of this blog, both of them, will know what a fan I am of Edgar Buchanan, and it’s great to see him here doing his classic act of slightly roguish but basically good old-timer, this time a wily prospector. Arthur Kennedy is not my favorite Western actor it must be said but his performances were certainly memorable in the likes of They Died with their Boots On, The Man from Laramie, Bend of the River and Day of the Evil Gun. 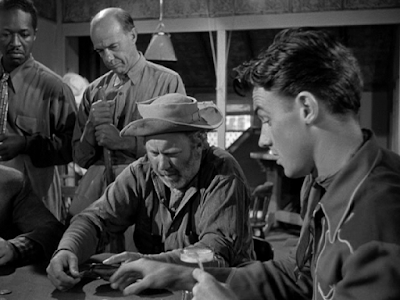 Buchanan deals
Seriously glam Ella Raines had been signed by Howard Hawks and was Randy’s love interest in Corvette K-225. She wasn’t a Western specialist, far from it, but she had taken the female lead opposite John Wayne in Tall in the Saddle five years before. She does a good job in Walking Hills. 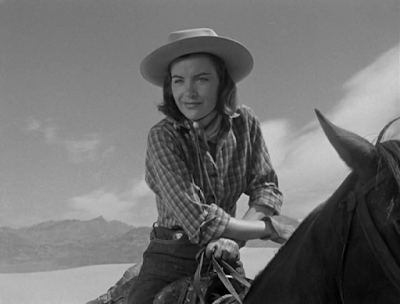 Ella Raines - surprisingly, maybe, doesn't get to ride off with Randy. Randy ends up with a foal in his arms, not Ella.
So producers, writer, director, cast: all from the top drawer.


The hills of the title are the shifting sand dunes and if you have ever been to the White Sands in New Mexico you can see how they would indeed appear to walk. This movie, though, was shot in Death Valley (with 140-degree temperatures for the actors and crew), by Charles Lawton Jr., one of the great Western cinematographers, in a glowing black & white. Some scenes of the dunes are stunningly good and the sandstorm is remarkably well done. Lawton worked with Delmer Daves a lot (3:10 to Yuma may have been his finest work), and for John Ford. The series of Westerns he did with Scott and Brown and director Budd Boetticher, Comanche Station, The Tall T and Ride Lonesome, were absolutely superb.


It’s a treasure-hunting plot. The group get wind of the whereabouts of a lost wagon train that had foundered in the desert and was reputed to be carrying gold. The small party digging for it includes the private eye, who is ready to abandon his employer and the mission to get his hands on the loot. Violence explodes as rivalries and disagreements flare. A fight in the dunes with shovels is brilliantly done. 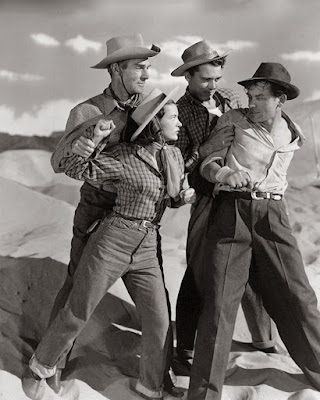 Staged publicity still has Ella wanting to throw a punch at John Ireland
There is no doubt that the success of Warners' The Treasure of the Sierra Madre in 1948 influenced the making of this film. Columbia got gold fever and put out the excellent Lust for Gold (with Glenn Ford and Ida Lupino) and The Walking Hills in 1949 with similar gold-hunting/skullduggery/tension plots.

Josh White is in it and he is great but he is only there to sing and dig – well, he was a Negro after all. That’s the 1940s for you. Still, the blues he sings are very, very good. 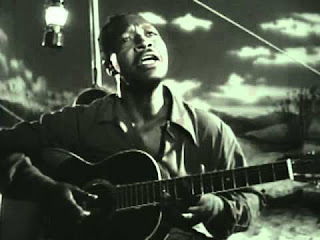 Josh White sings the blues
The bad guys get killed and the good guys get gold, so all’s well that ends well, and Edgar Buchanan wraps it with, “Well, that’s ‘at.”