The comedy Western is a notoriously difficult genre to get right. Humor is such a personal thing and trial audiences or focus groups aren’t always good judges. What some find hilarious might be dull as ditchwater or plain silly to you or me. A few comedy Westerns got it right (think of ¡Three Amigos!, the Bob Hope pictures or the sublime Blazing Saddles) but many got it hopelessly wrong, and it is with regret that I tell you that for me anyway, The Ridiculous 6 is in the Hopelessly Wrong category. 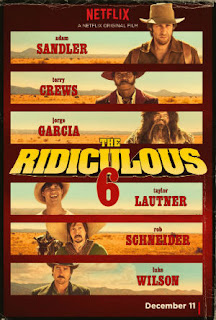 Two Rode Together for John Ford in 1961, Ford had Three Godfathers in 1948, there were Four Guns to the Border in 1954 and Five Guns West in 1955, now The Ridiculous Six, The Magnificent Seven in 1960, Tarantino’s soon-to-emerge The Hateful Eight, in production there’s The Notorious Nine and Randolph Scott was after Ten Wanted Men in 1955, so Westerns assuredly like numbers in their titles).


One thing, though: parodies only work if the object of the parody is current or strongly established in the mind of those watching them. To me, it is an illustration of the strength of the Western as a lasting film type that a pay-TV company can produce one in 2015 destined at a young adult audience, with pastiche figures appearing in it like General Custer and Wyatt Earp, and with many of the clichés of the genre being rehearsed. It shows how deeply rooted in the American psyche (and in fact world psyche) the Western movie and its accoutrements really are. You only have to put Earp and Custer at a poker table and drop in a remark or two about the fastest gun in the West and dealing with Injuns, and everyone instantly understands where you are coming from. 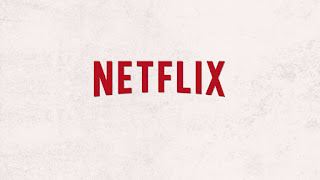 The Ridiculous 6 is, by the way, aimed at a young adult audience, specifically, I would say, a college boy audience. The humor is earthy, sometimes crude, and the ensemble is likely to appeal to late teen or early 20s males (girls will find it less funny). Not being, any more, a young-adult male (Eheu fugaces labuntur anni) I must say I found it less than hilarious and at times in fact quite repellent.


It seems to be a fairly personal creation: Adam Sandler produced, wrote and starred in it. Mr. Sandler, you probably know, is a comedian who moved from stand-up and Saturday Night Live into the movies. Many people find him very funny. 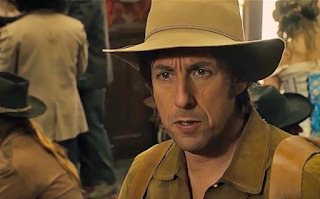 The cast is strong. Nick Nolte is the patriarchal outlaw central to the plot (the absurd sextet of the title are all his sons by different mothers); Harvey Keitel is the smiling but murderous saloon owner; Steve Buscemi the unfastidious barber-surgeon; John Turturro makes up the rules of the new game of baseball as he goes along, to suit himself; Danny Trejo is, obviously, an evil bandit killer, Cicero; and a certain Vanilla Ice plays a rapping Mark Twain. From his name I guessed that Mr. Ice might be a popular singer and when I looked him up it turned out to be so. Apparently, "Ice Ice Baby was on the number #1 spot for 16 weeks” and he appeared in Teenage Mutant Ninja Turtles II (doubtless you already knew that).


However, although the cast list contains some famous names, the principals, the 6 themselves, are less well known (to me anyway) and both in terms of thespian skills and the lines they have to deliver they do not exactly shine.
I only laughed once, when one of the half-brothers who had been Lincoln's bodyguard at Ford's Theater dived in front of the hero (Sandler) to take a bullet, in the best Hollywood tradition. It wasn't so much that action that I found amusing but the vision the courageous man had in his concussed state of the hero dressed as Abe and the sight of the burro morphed into Mrs. Lincoln.


To be brutally frank with you, though, the movie is junk.