The early silent movies about Jesse James depicted him as a spotless and maligned hero, an American Robin Hood, and the first big-studio A-movie about him, Fox’s 1939 Jesse James, a whitewash in color, had a dashing Tyrone Power as a bold and misunderstood champion of the underdog. But the juvenile delinquent and criminal JW James was such a figure of myth and legend that he was bound to feature in cheap B-Westerns when these were churned out in large numbers, and he duly did. Don ‘Red’ Barry and Roy Rogers were Jesse. Lawrence Tierney and Clayton Moore both played him twice. Audie Murphy was a decent, all-American Jesse in Kansas Raiders in 1950, and there were several others. In 1953 poverty row studio Lippert cashed in with a version, just as preposterous and fake as the others, with a title suspiciously close to Paramount’s The Great Missouri Raid two years earlier (with Macdonald Carey as Jesse). 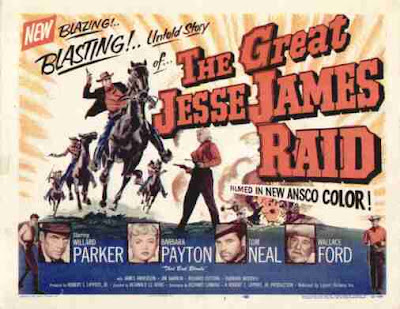 It is some nonsense about poor Jesse, now loving family man Mr. Howard in St Louis, tormented by nightmares of his whipping by a Union soldier as a youth, who is inveigled by Bob Ford (Jim Bannon) into undertaking ‘one last job’ to rob a mine in Colorado. Jesse has to recruit some experts - a gunslinger, a dynamite man and a teamster - and meet Bob and his accomplice Sam Wells (Richard Cutting) in Creede for the heist.
So the first part of the movie is about Jesse wandering the West picking up the required specialists: good old Wallace Ford (the best thing about the film) with his explosives, Tom Neal as two-gun killer Arch Clements and James Anderson as Johnny Dorette, the horseflesh expert. 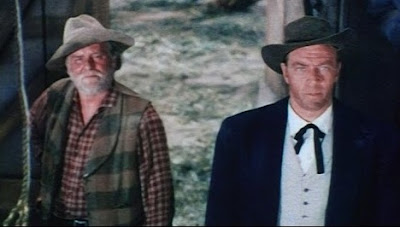 Wallace and Willard. Wallace Ford is in fact the best thing about the picture.
Willard Parker is Jesse (there’s no sign of Frank). New Yorker Worster von Eps was a meter reader become tennis pro whose blond good looks got him some screen time under the snappier name of Willard Parker. He did quite a lot of B-Westerns between 1937 and 1960, mostly in smaller parts but occasionally leading. In fact he was to be Cole Younger in a later Jesse James picture, Young Jesse James in 1960. He also led in the quite successful TV series Tales of the Texas Rangers between 1955 and ’59. In The Great Jesse James Raid he does a basically decent Jesse, tormented (as far as the clunky script allows) by his past and longing to go straight with his wife and son. He spends much of the first reel without his shirt, which probably pleased lady viewers

The print (or at least the one I saw on TV) is in a pretty bad state now, scratchy and jumpy, and with lurid color. It would hardly be worth remastering, though. The production is low-budget and very amateurish. The opening titles resemble those of some old silent movie. There’s a lot of very old-fashioned standing round on a set interior, talking. 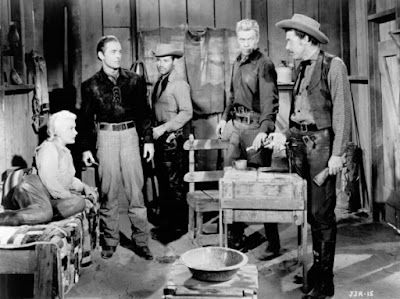 Old-fashioned, like a 1930s serial
Bob Ford is already running a saloon in Creede. He is a black-hearted villain who plans from the outset to murder Jesse for the $10,000 reward. He also plans to double-cross his other partner, Sam. We don’t get to see him shoot Jesse, though, and there’s no sign of brother Charlie. We do see Jesse adjust his ‘Home, Sweet Home’ picture, though, as a knowing nod to what is to come. Zee (Barbara Woodell) dislikes and mistrusts Bob, but she's soon written out when Jesse sets off on the job in the first reel.

There’s another dame, Creede saloon gal Kate (Barbara Payton). She’s Bob’s squeeze but he mistreats her and she takes a shine to young Johnny (she can’t go for Jesse because he’s a married man and it's the moral 1950s). Ms. Payton was a buxom blonde in red with acting ability close to zero but I doubt if the (male) audience minded that.

In fact cast member Neal and MGM actor Franchot Tone got into fisticuffs over the charms of la Payton. Everyone landed in jail and on the cover of Confidential. Neal would end in prison for the murder of his second wife and Payton would decline into drug use, alcoholism and prostitution. It's not a pretty story.

The Richard H Landau screenplay contains lines of the quality of “I don’t like it. It’s too quiet.”
The poster says it is "the untold story" of Jesse James. Well, it's untold because it never happened.
The picture ends with a nice painting.