The Doolins of Oklahoma (Columbia, 1949)


A B-Western of quality

Bands of outlaws were meat and drink to the Hollywood Western, and if they contained brothers and robbed trains and banks, so much the better. The Reno brothers were probably the first but of course the James gang and the Youngers often appeared on the screen, and later examples such as the Daltons were pretty popular too. The last in the line were the Doolins, offshoots of the Daltons, who marauded in Oklahoma in the 1890s. They had a variety of names, The Wild Bunch, of course, (but then many outlaws had that soubriquet) but also The Oklahombres and The Oklahoma Long Riders (for the long dusters they wore).


Burt Lancaster, Audie Murphy and Randolph Scott all had a go at being Bill Doolin. William Doolin (1858 – 96) was a cowboy who got into a shooting scrape in Coffeyville on July 4th 1892 and then joined up with the Dalton gang. Rumors persist that Doolin was “the sixth man” holding the horses in an alley at the fatal Coffeyville raid in 1892. Emmett Dalton, the only survivor of the raid, never disclosed who the man was. Doolin then formed his own gang. From 1893 to ’95 Doolin and his cronies (who included the teenage girls Cattle Annie and Little Britches) went on a spree of crime, including the so-called Battle of Ingalls, until Doolin’s career finally came to an abrupt end caused by the shotgun of Heck Thomas. 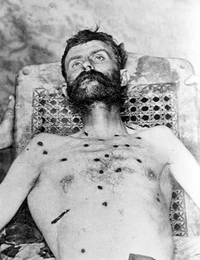 The real Bill Doolin, after Heck Thomas had finished with him. Ouch.
Hollywood Doolins are, naturally, misunderstood goodies. Directors and screenplay writers dipped their very broad brushes in copious quantities of whitewash to paint a picture of Robin Hood-like social bandits driven unwillingly into crime by force of circumstance. In this movie Randolph Scott wants to go straight and settle down on a ranch with his true love but is pretty well obliged to take up robbing again by his cronies. “Forced to seek friends outside the law, then chosen as their leader.” 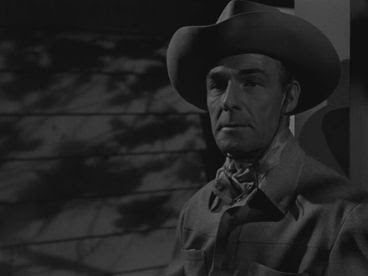 Randolph Scott as a noble Doolin forced to rob
The movie has good credentials. Gordon Douglas directed it for Columbia, probably the most proficient studio at B-Westerns. Douglas was a workaday director who churned out some pretty ordinary stuff, from 1944 to 1975, but also made quite a few excellent Westerns. The Doolins was in fact only his second. The year after, he did The Nevadan, also with Scott, which was actually very good. The dark, intense Only the Valiant with Gregory Peck, the colorful Bowie bipic The Iron Mistress with Alan Ladd, the remake of Stagecoach, two nice pictures with Clint Walker, Fort Dobbs and Yellowstone Kelly, two later actioners, Rio Conchos and Barquero, all these oaters were not at all bad, and Douglas deserves credit for directing solid, well-made (if B) Westerns. 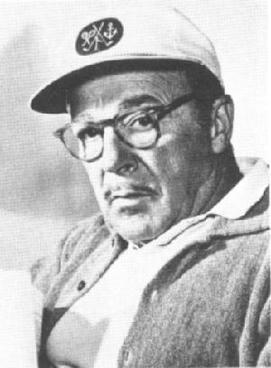 Gordon Douglas
It’s pretty actiony, with Yak Canutt doing the stunts and Jock Mahoney standing in for Randy. The story and screenplay were by Kenneth Gamet, who had done an outstanding job on Coroner Creek the year before and who wrote six movies for Randolph Scott. He was a pro.


The music is by Paul Sawtell, and Charles Lawton Jr., one of my favorite Western cinematographers, did an excellent job with the Alabama Hills, Lone Pine locations. Some of the photography is remarkably good, enough to make you sit up and take notice. If you watch it, look out, for example, for the night descent of horses in the dust, or an aerial shot of swirling horses. 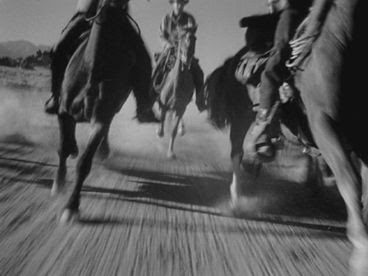 Excellent cinematography
And the cast is strong: John Ireland as Bitter Creek and Noah Beery Jr. as Little Bill are among the outlaws, George Macready is the lawman, and we get Louis Allbritton as Rose of Cimarron (Bitter Creek’s girl) and Dona Drake as a feisty Cattle Annie (there’s no sign of Little Britches). 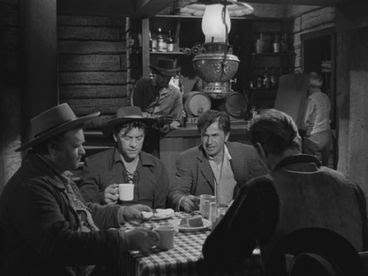 The Doolin gang
So all in all it’s a professional, tight Western with much in its favor.


Randy dies on screen for only the fifth (and last) time in his career. Good bandit he may be but he can’t be seen to get away with robbin’ and shootin’.