Ride with the Devil, director Ang Lee’s only Western (well, semi-Western: it’s a Civil War story) stars Tobey Maguire, who manages never to look like Spider Man and only look like Peter Parker once, when he has his hair cut in the last reel. For most of the footage he is a Confederate guerrilla in Missouri with flowing locks and a Rebel shirt. One of his fellow guerrillas is Simon Baker, also with flowing l., but he doesn’t look like the Mentalist at all. 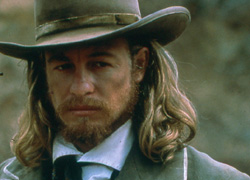 Baker as aristocratic Reb
It’s a Bushwhackers v Jayhawkers Jesse James-ish tale, though Jesse and Frank never appear. Nor does Bloody Bill Anderson, but we do get Quantrill (John Ales) who in fact, with the aid of the costume and make-up persons, quite resembles the Quantrill of portraits, which is more than most Quantrills ever do (a slim man in his twenties, he’s been played by Brian Donlevy, Leo Gordon, Forrest Tucker, even Broderick Crawford for goodness sake). 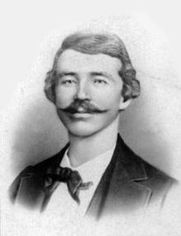 William Clarke Quantrill
The screenplay and Mr. Ales capture well the mixture of charisma, passion, ruthlessness and scurrilous demagoguery of Quantrill. In fact the script (James Schamus’s adaptation of Daniel Woodrell's novel Woe to Live) is intelligent and subtle. The war is a local affair, people are fighting for complex and even uncertain personal motives, and nothing is black and white. In fact one man, Holt (Jeffrey Wright), is a black fighting with the Confederates out of personal loyalty. Gradually Holt’s fellow fighters come to see him as a person rather than a Negro. Holt and the hero are both wounded in battle, but by one of their own side who hates them. 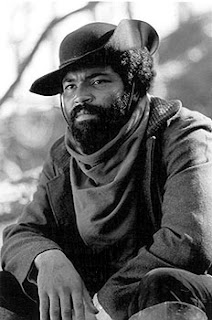 Holt is on the Confederate side
Roger Ebert has made the point that it’s a rare film in that the characters do not seem to know already which side is going to win the war (most screenplays make a specialty of hindsight). Perhaps it’s good to have a non-American like Mr. Ang (born in Taiwan and now a US resident but not a US citizen) making a film about the Civil War; it gives impartiality and maybe clarity of vision. 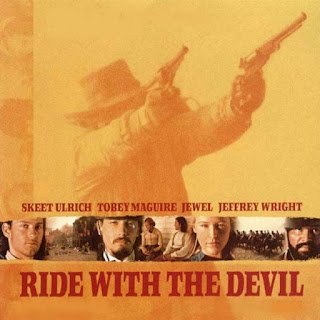 Quite well done
It’s a psychological Western in the sense that it concentrates more on the personalities and the interaction between them than on their adventures, though there is plenty of action, including the raid on Lawrence. It’s a long film, with much talking (often death to a Western). Ang goes for an authentic period look but manages, mostly, to avoid Sense and Sensibility picture-postcard costume-drama status. There could perhaps have been more dirt.


The language is fairly convincing as nineteenth-century talk, from the writing point of view (the captured letters read out were especially good). However, although many reviews of this movie praised the acting, I myself thought the cast didn’t quite bring it off; it didn’t always sound natural. Mr. Maguire didn’t quite convince as a tough guerrilla fighter or violent youth; he didn’t seem angry enough. The love interest is provided by blonde Rebel sympathizer Sue Lee (Jewel, the singer) who gets pregnant by one of the guerrilla pals and then marries the other. Ms. Jewel plays it straight, advisedly, and does her best but in all honesty she is hardly Old Vic material. 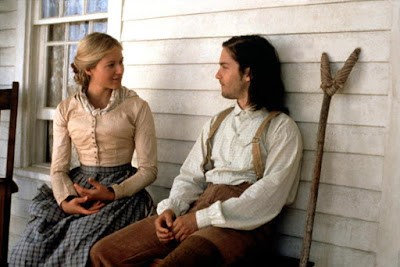 Jewel and Spider Man: not lovers but soon to be married
The action is realistic, with confused movement, noise and bullets whipping past. But the tone of most of the film is cool and observant. Ang seems to have insisted on low-key, unhistrionic performances. Even the sex is done discreetly and in an unHollywood way.


I did enjoy the movie, and though it was very long it didn’t drag for me, but I myself wouldn’t put it in the very top drawer of recent Westerns. It didn't storm the Oscars or anything. Still, it's pretty good, and you could watch it.