Splice a couple of episodes together and call it a movie

Tales of Wells Fargo was a successful TV Western series for NBC, running from 1957 for six seasons, so by 1961 it was ripe for a feature-length made-for-TV movie, starring Dale Robertson as Jim Hardie. In fact, though, rather than a proper film, it’s a couple of TV episodes spliced together.


RG Springsteen directed 16 episodes of the series and had a long career directing B-Westerns from 1945 onwards and it must be said that in Gunfight at Black Horse Canyon he did a sound, if not very inspiring job. That holds true, in fact, for most of those involved: the film is OK, and watchable, but not terribly memorable or special. The editing team had an impossible job really. 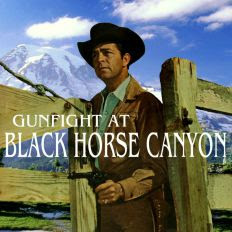 Successful series spawned a 'movie'
It was in color and opens with a train, so it was no zero-budget affair, even if in those days TV Westerns didn’t exactly rival Gone with the Wind in big-screen spectacle. It also had a good cast list, with Western character actors like William Demarest, Claude Akins, Philip Carey, George Kennedy and Rod Cameron all figuring. The series did well for guest stars.


We have a snooty New England writer (Patricia Owens, from The Law and Jake Wade) come to the West she despises as “uncivilized” to write a damning article about it, and of course thanks to Jim she gradually comes round and sees its qualities.


Jim Hardie always went about the West behaving like some sort of super-sheriff. Local marshals get treated as little more than his deputies and do his bidding. Oh well, he was the star, I suppose. 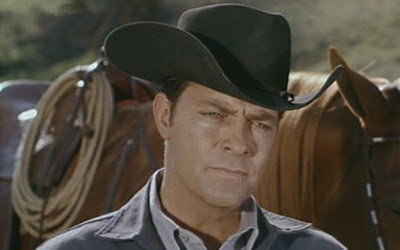 Jim looking rather stern
Carey is a villain just out of ten years in the pen and determined to get revenge on the man who put him there (Dale, of course). His henchman Claude Akins, who has a bit of actor’s ‘business’ with his spur rowel, has, at the boss’s orders, issued a wanted poster on Jim (WANTED – DEAD ONLY) and Carey wants Jim to sweat as bounty hunter after bounty hunter goes for the $5000 reward. Fools. As if they could get the better of Wells Fargo’s top man. Carey is the charming-rogue kind of baddy, and the Eastern writer is tempted to succumb to his polished manners and winning smile. Until she sees the light.


George Kennedy is the accomplice of a separate (but equally charming) baddy, Rod Cameron (Rod also tries out romancing Patricia). George is truly mean, though, whereas Rod doesn’t want to shoot anyone. Rod was looking a bit stout by 1961 but hell, he’s entitled. Actually, this part of the plot kinda takes over and we are in danger of forgetting about the Carey/Akins pair altogether, but they come back to be nasty, and defeated, in the last reel. But that’s the problem with trying to edit two episodes into one movie. 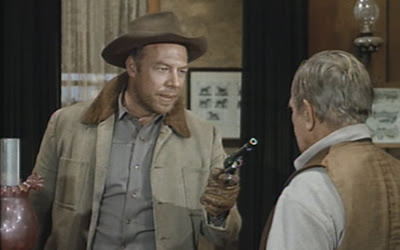 George is badman Hawk
The main plot is introduced and ended with another story about Jim trying to capture a wild stallion. There’s a tomboyish girl who has set her cap at Jim (who appears positively monastic in his lack of interest in the fairer sex) and this lass (Mary Jane Saunders) tries to capture the wild horse as a present for Jim, an enterprise doomed to failure. She gets a stern moral lesson from Jim: you shouldn’t try to buy friends. It does seem a bit harsh.


Demarest is Jim’s farm factotum, of course. The part could have been done by Walter Brennan, Arthur Hunnicutt, Gabby Hayes or any of a number of amusing-old-timer specialists but Mr. Demarest does a good job.


If you were a Tales of Wells Fargo fan (and what planet were you on if you weren’t?) you’ll enjoy this go-round but as a stand-alone Western movie I fear it suffers from insuperable editing problems and the very evident TV look of it.