By 1949 Randolph Scott was not only starring in Westerns; he was also producing them. He produced two in that year, The Walking Hills and Trail Street, for the second of which he was associate producer with Nat Holt, the Tales of Wells Fargo guy. Scott did a trio of RKO Westerns with Holt at this time (Badman’s Territory in 1946, Trail Street in ’47 and Return of the Badmen in ‘48) and while none was what you might call a classic or great example of the genre, they were all solid, enjoyable oaters with real quality. 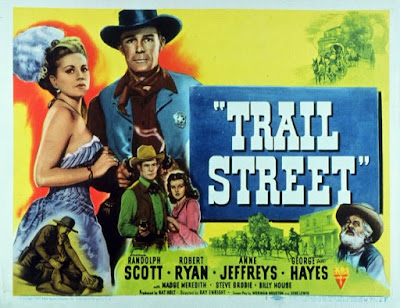 It's a B-Western with oomph
Trail Street is a Bat Masterson tale. Bat was of course a great favorite of Hollywood (Randy’s was in fact only the third screen Bat but there would be many more, on the big screen and small) and he was usually portrayed, as here, as a steely lawman with a slightly laid-back approach, and a bit of a dandy. It wasn’t that far from the truth. However, Randy as Bat doesn’t appear till a good quarter of an hour into the movie and you do get the feeling that Trail Street was something of a trail for RKO’s young star Robert Ryan, much as Columbia’s The Desperadoes (in which Scott also theoretically topped the bill) was for Glenn Ford. Randy was a modest and generous man, though, who was perfectly willing to stand back a little and give a good dose of the limelight to other actors. 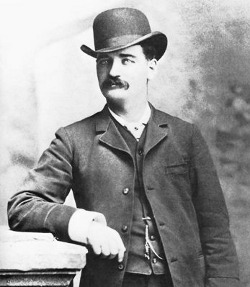 The real Bat
In my belief Robert Ryan was one of the greatest Western actors of all time, especially as the bad guy, though this was an early Western effort of his (he had had small parts in two oaters in 1940 but this was his first big role) and he doesn’t really shine all that much. He plays a good guy (he was also in another Scott/Holt movie when he was splendidly bad as the Sundance Kid in Return of the Badmen). But in Trail Street he is Allen Harper, capitalist with a heart of gold who is generously aiding Kansas farmers - for yes, this is a classic ‘honest homesteaders vs. greedy big ranchers’ plot. 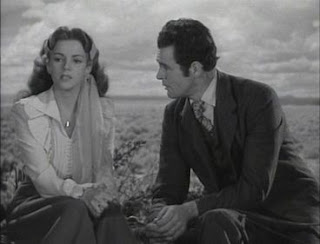 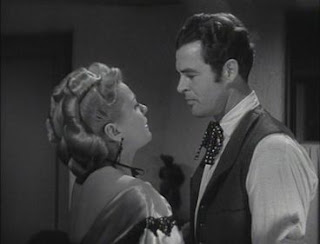 Ryan dallies with both gals
Quite a lot is made of Bat's journalistic ambitions. Masterson did of course eventually become a journalist in New York (and died at his desk there in 1921) but there is no evidence that journalism was his lifelong ambition. Still, Hollywood liked the idea – Keith Larsen was a boy reporter in Wichita when Joel McCrea’s Wyatt Earp was marshal there, a preposterous notion - and in Trail Street Bat often mentions that he wants to start scribbling, and at the end of the movie he goes off to New York to do exactly that.


The one who writes to Dodge City to invite Bat in to clean up the town of Liberal, though, is not Ryan but Gabby Hayes, as Billy Burns, who did the required amusing-old-timer sidekick role in all three of the Scott/Holt pictures. Gabby was always enjoyable, if perhaps a tad typecast, though he was near the end of the career and in fact is said to have suffered a heart attack on the set of Trail Street. It can’t have been too bad because he finished it OK and he did five more Westerns, three of them with Randy, and The Gabby Hayes Show on TV before he expired (of another heart attack) in 1969. Gabby’s nephew said, “Randolph Scott was really one of the finest gentlemen he [Gabby] ever had any dealings with. They not only worked together on screen, but they were close friends off screen.” 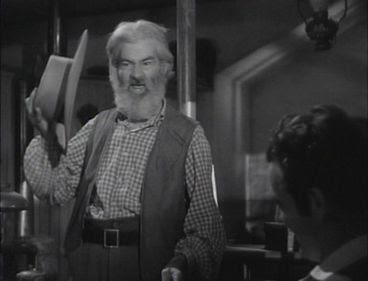 Gabby tells another tall tale
The story is based on the novel Golden Horizon by William Corcoran, worked up into a screenplay by the very experienced Norman Houston (50 B-Westerns) and the less hardened but more-than-competent Gene Lewis. It’s directed by reliable Ray Enright, who did 17 Westerns, from a 1927 Rin Tin Tin picture to a Sterling Hayden B-Western of 1952 but his best work was certainly with Randolph Scott: The Spoilers in 1942 and, in particular, the gripping Coroner Creek in 1948.


There are the obligatory two dames, a prim and proper rather glamorous one, for whom the hero (Ryan, though, not Randy) will probably fall, and the racier saloon gal with whom Ryan may dally but who will not win his heart (or engagement ring). The good girl, Susan, is Madge Meredith, famous for being sentenced, later that year, to five years for complicity in an assault on her manager. It was later proved that she had been framed and she was released. This was the first of her three Western movies, though she also did quite a few Western TV shows. The saloon singer was Anne Jeffreys (also in Return of the Badmen) who is quite good with her 1940s-ish songs (I thought You’re Not the Only Pebble on the Beach was especially groovy) and she prances about the saloon in one of those silly 1940s frilly dresses that look more like Victorian underwear (I’m sure no one ever actually wore those things). She gets a bullet in the back from the baddy in the last reel, which seems a bit harsh, but 40s Hollywood morals couldn’t allow a common saloon girl to win the hero’s hand. La Jeffreys also said nice things about Randy: “He was a thorough gentleman, pleasant and easy to work with.” 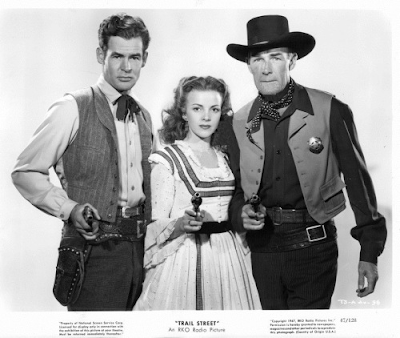 They've all got guns
Frequently-seen but bland-ish B-Western heavy Steve Brodie (The Far Country and pretty well every Western TV show you care to name) is the bad guy Maury, who eventually gets his just desserts, natch, though not actually at the wrong end of Bat’s gun. The, er, imposing Billy House is the slimy saloon owner Carmody in a fancy vest. Among the lesser parts are Harry Harvey as the mayor and Jason Robards Sr. as, well, Jason. And Ken Maynard’s younger brother Kermit is a gunman. 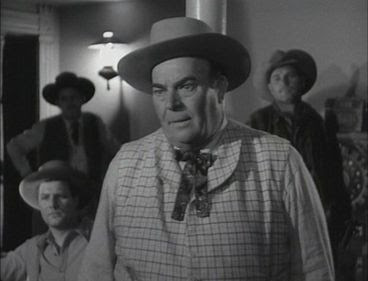 Fat saloon owner
The music is by Paul Sawtell, always good, and J Roy Hunt (who worked on the 1929 The Virginian and on Annie Oakley in 1935) was behind the camera, though most was done ‘in town’ (i.e. on a sound stage) and there’s nothing remarkable or especially noteworthy about the black & white photography except one rather good shot of Ryan at a window overlooking wheatfields.


There’s the tried-and-tested scenario of the bad guys coming to bust one of their number out of jail and the good guys, the marshal aided by co-stars, determined to prevent that happening. You might call it the Rio Bravo plot. It all leads to quite a good night-time shoot-out in the street. Gabby also plays his own cousin Brandyhead Jones, the object of all Gabby’s tall tales, who arrives on the stage in the last reel.


Undemanding (The New York Times said it was “just another pistol drama”) but all in all a very satisfactory B-Western with considerable oomph. 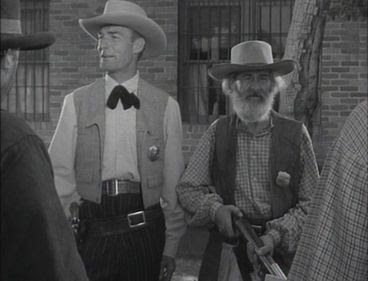