Roughing It by Mark Twain is one of the most entertaining books on the West you could imagine. Written in the 1870s about what happened to Sam Clemens and his brother in the 1860s, it is as authentic as you could possibly want. The language is of the time, not a modern author’s approximation of it. How they traveled, what things cost, what people wore, what they ate, what they read and what they said are all straight from the stagecoach horse’s mouth. It was the vernacular American experience - at which Mark Twain excelled.


I suppose a movie of it was inevitable and was inevitably going to disappoint. This one was made by Hallmark. Now is it me or does everything they produce have the hallmark of blandness stamped on it? I am probably being unkind. This does at least have everyone’s favorite, James Garner, as an older (and rather portly) Mark Twain. He is giving a speech at a graduation ceremony and among those receiving a degree is his daughter. Twain tells the story of his youth, and we flit between the assembly in academe and the youthful Sam on the frontier (played by Robin Dunne, with the right blend of innocence and perspicacity). It must have been a very long speech. 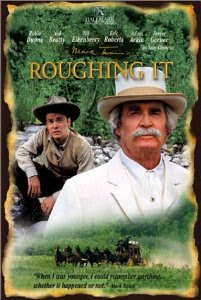 Naturally, even in a relatively long TV mini-series they have to make a selection and naturally (though rather tiresomely) they also have to invent episodes which are not in the book. I suppose they think they are ‘improving’ on the original tale, which is probably lèse majesté. On the long stagecoach ride, for example, Twain was disappointed not to be able to tell of a hold-up by bandits. The TV show, however ‘corrects’ that, with a rather silly one.


The movie plays up the whole business of the killer Jack Slade (Ned Beatty), and that’s fair enough because Twain did too, admittedly with tongue in cheek but still, he loved to recount the grisly details.


There’s a cow on a roof, one of the oldest images of all (it goes from Homer to the Cohen brothers). 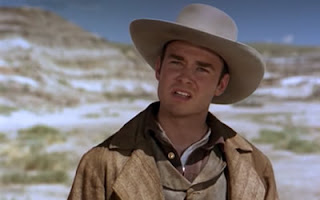 The film stops short of Sam in San Francisco and his time in the Sandwich Islands (Hawaii), partly because his speech couldn’t be that long and partly because it’s a less fun part of the book really.


To be fair to Hallmark, they did try to capture the wry humor and “innocents at home” tone of it. The director was Charles Martin Smith (Terry ‘The Toad’ Fields in American Graffiti and Ned Brookshire in Streets of Laredo). The screenplay was written by Steven H Berman (responsible for two TV Westerns, Rio Diablo and Prairie Fever), who did try to catch the spirit of the book, I think.


The character Johnston was played by Blu Mankuma, who was Jim in the 1980 TV Huckleberry Finn, so there’s a certain symmetry there.


You could watch this two-part drama. There are worse things to do. But in all honesty you’d be far better off reading the book. 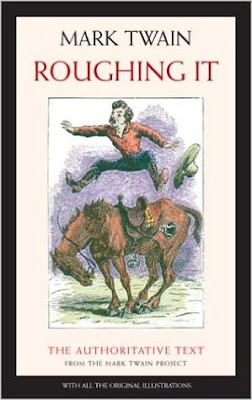