I think of John Wayne’s Western career in various phases. The first phase was the three pictures he made with Fox, two as an extra and one, The Big Trail, as the star. The second phase consisted of the three dreadful movies he made for Columbia in the early 1930s. Then came six well made and rather fun oaters from Warners, 1932-33 (see, for example, The Telegraph Trail).

After that Duke entered the long years (or so they must have seemed) leading in very B-Western programmers for Monogram under the Lone Star label, which lasted (though Monogram transmogrified into Republic) right through to the late 1940s. There were occasional exceptions: he made Hell Town for Paramount in 1937 and, most notably, starred for John Ford in Stagecoach (United Artists) in 1939. But from 1933 onwards he made sixteen low-budget, repetitive and rather juvenile Westerns for Lone Star/Monogram, and then 24 movies, many not much better, though some much better, for Republic.


We have already reviewed some of the Lone Star ones and today it’s the turn of another, Rainbow Valley, of 1935, which was the thirteenth. 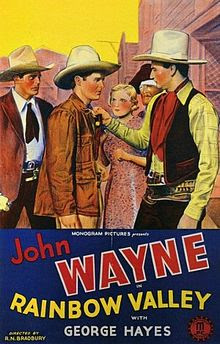 The mixture as before - and that's OK
It’s very much the mixture as before, though the audience (largely boys) didn’t seem to mind. In fact they probably liked it. Same crew, many of the same actors, hell, it’s even got the same plot. This time John Wayne is John Martin (he was always John Something). He arrives in town and kits himself out at a general store in range duds (the slightly dudish duds of the period) and a .45. Riding for Rainbow Valley, he encounters a humorous old-timer - Gabby Hayes obviously - driving his old jalopy, Nellie. These Westerns had no complexes about having automobiles in them, and were set in some indeterminate age when cowpokes wore six-guns and rode the range, yet women in 1930s dresses and hairstyles drove cars. There’s a picture on the post office wall of Theodore Roosevelt so we must assume the story is nominally set during his presidency (1901 – 1909). 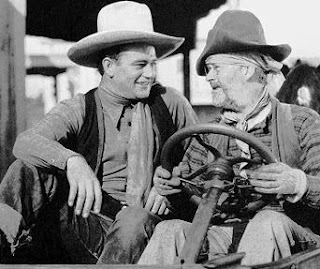 'John Martin' and Gabby ride into town
There’s skullduggery (all of these Westerns involved criminals being thwarted). This time a gang under the evil Butch Galt (Buffalo Bill Jr.) is preventing honest townsfolk from building a road so the crooks can buy up all the land cheap (and then presumably build a road). Butch is in the pen but will soon be released and meanwhile his chief henchperson Rogers (LeRoy Mason) runs the gang of thugs. Any assiduous follower of these films will know that John Martin-Wayne is a special agent of the governor, secretly sent to investigate the crooks, and this duly turns out to be the case. 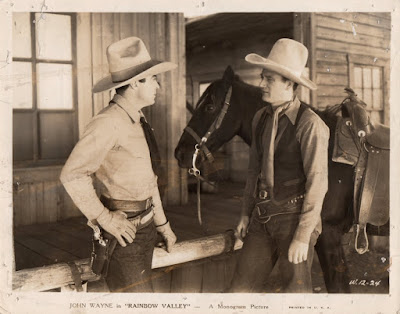 Duke sizes up the bad guy
Well, there’s mucho shootin’, not to mention rootin’ and tootin’. There’s a gal, naturally, Eleanor (Lucile Browne: she’d been in six such B-Westerns but it was her first with Wayne). She’s Gabby’s niece and she runs the post office, where there is much tampering with the US Mail, a heinous crime, as we know. We all know John Martin will foil the villains and get the gal, and he duly does, and the last scene is a kiss in the back of Nellie with Gabby smirking from behind the wheel. The boys in the cheap seats didn’t want any more than that (in fact they could probably have cheerfully done without any girl at all) but it was the traditional ending. William S Hart used, hilariously, to shake hands with the heroine at the end. Tom Mix gave her a chaste peck on the cheek. But by the time of these Wayne Lone Star oaters it was a full-on snog.


There’s no music at all, perhaps to save money, but curiously it’s almost a refreshing change.
John uses several of those splendid roundhouse punches he had to eliminate the bad guys.


The dialogue is wooden in the extreme and is delivered by the cast in an appropriately wooden way (except Wayne himself, who was getting the hang of these movies by now and loosening up a bit). It was written, as many of them were, by Lindsley Parsons (this was his eighth with Wayne) and directed by good old RN Bradbury, who did 13 of Wayne’s early oaters. It was really like painting by numbers and Bradbury must have been able to direct these pictures with his eyes closed. In fact judging by the look them, perhaps he did.


It’s 52 minutes of fun and I am not knocking these movies. In their own terms they were perfectly OK. Don’t expect too much: just enjoy.