Go West, Young Lady is a lovely, silly little black & white 69-minute comic/musical Western directed by comedy vet Frank R Strayer. Glenn Ford, in only his second Western, 25 and astonishingly handsome, is Tex Miller (therefore with two guns, obviously), the new sheriff of Headstone, whose last three or four law officers have been shot by the dastardly Killer Pete (Onslow Stevens) and his gang. Sheriff Tex falls for Belinda ‘Bill’ Pendergast (Penny Singleton, sweetly Julie Andrews-esque) on the stagecoach on the way to Headstone but there’s a running gag about a pie that (for a time) gets in the way of true love.


There are six songs, luckily not sung by Glenn but by Ann Miller as the saloon gal Lola, and the Texas Playboys, singing their hit Ida Red, with a couple of croonings by Penny. There’s much tap dancing too. Indians attack the stage and there’s a posse. Kermit Maynard is an (uncredited) posse rider. Glenn Strange the Great is also there as an equally uncredited townsman. 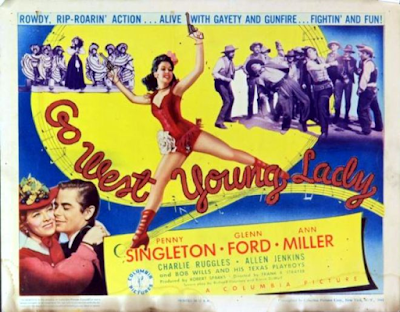 Penny and Ann slug it out, in a Destry kind of way, if catfights are your thing. Killer Pete is unmasked in the final reel and his gang routed by the massed ranks of the town’s women armed with frying pans and brooms. Glenn looks extremely dashing in his frock coat. What more do you want?
Ok, it's thin on plot, and you get the idea that the songs are there to pad it out. But it's all done with gusto. There's nice scenic photography, by Henry Freulich. I may have been a bit over-generous with the revolver rating but any Glenn Ford Western has a headstart in that regard. 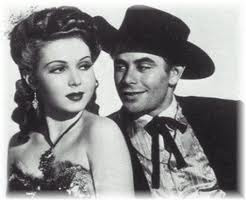 This fun little picture is chock-full of vim and zip and there’s even the great dog Waffles (played by himself).


You should watch it.