Another in the American Experience series aired on PBS was Buffalo Bill, a one-hour documentary written and directed by Bob Rapley, and available on DVD. Mr. Rapley has written, directed and/or produced a variety of interesting films on American history and the shows are serious, reliable and properly researched. 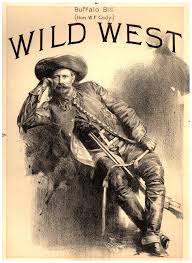 By now the essential facts on the life of Buffalo Bill are pretty well known, largely thanks to Don Russell and his definitive biography The Lives and Legends of Buffalo Bill. And indeed this PBS documentary adds nothing remarkable or new. But it’s good to have the facts recounted in a relatively sober and unsensational way, and feel that you are hearing a reliable account. Above all, these films are great for the photographs and even early movies that they show. The people who do the picture research are not credited separately but they are key to the success of the picture.


The film does not deal with Cody’s youth but starts with the Civil War. Among the elements of the story Rapley chooses to highlight are how much Cody imitated Wild Bill Hickok, the marital difficulties with Louisa, the fact that when he scalped Yellow Hand he was wearing theatrical costume (i.e. was already projecting himself as a showman) and the huge steadying influence of Cody’s partner Nate Salsbury (often referred to as Salisbury). When Salsbury died in 1902 the steadying hand was removed and Cody’s notorious improvidence and lack of business sense brought about bankruptcy and collapse. 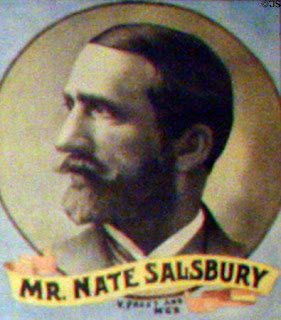 Another interesting figure was Arizona John Burke. Shirl Kasper, in her biography of Annie Oakley, says of Burke that he:


had nothing more than wind and brass as his stock in trade, backed by a tremendous popularity in every newspaper, railway and theatrical office in the country … The Wild West show meant more to him than anything else in the world, and he had a way of inspiriting enthusiasm in the minds of editors and reporters.


Burke had no claim to Arizona (he was an easterner) or the title of Major which he awarded himself but he was a great publicist, one of the pioneers of the PR industry, and he understood early the nature of ‘celebrity’, that someone could become famous for being famous. 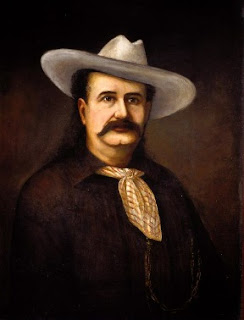 John Burke
The film also stresses the enormous success and popularity of Cody’s Wild West show. He made $100,000 in 1885. Three million people came to see the show during its summer at (or more accurately alongside, for the snooty organizers of the exposition did not allow him to pitch his tents inside) the Columbian Exposition in Chicago in 1893.

There were aspects of Cody’s life that were not discussed but perhaps would have been interesting to modern audiences. For example, his approach to Indians, whom he described as "the former foe, present friend, the American", and of whom he once said, "Every Indian outbreak that I have ever known has resulted from broken promises and broken treaties by the government." His early conservationism – despite his past as a destroyer of bison he was an early advocate of managed shooting and a proponent of a hunting season – is also interesting, as is his championing of women’s rights: “What we want to do is give women even more liberty than they have. Let them do any kind of work they see fit, and if they do it as well as men, give them the same pay."

The documentary emphasizes how in Cody’s last years he mellowed. He remained largely sober, he reconciled with Louisa and he seems to have found God. The turbulent life and feckless investments were put behind him.

Another enjoyable and informative PBS film which is definitely worth a watch if it comes on, or indeed a DVD purchase.