Painfully bad but I suppose audiences then were easier to please

We sometimes forget, or I do anyway, just how bad many of the juvenile 1930s B-Westerns actually were. If you are in danger of this, I recommend you watch the 36th of Guinn ‘Big Boy’ Williams’s 150 Westerns (he started in Jubilo in 1919 and ended with The Comancheros in 1961). It goes by the pretty dreadful title of Big Boy Rides Again. Now don’t get me wrong, I have passed many a happy hour with 57-minute black & white programmer oaters. In fact I greatly enjoy another Big Boy Williams Western of this year, The Law of the 45s, but this particular one, Big Boy Rides Again I mean, which is more of a C-movie than a B one, is, well, dire. 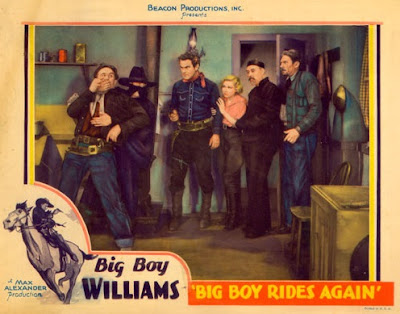 Perhaps the ten-year-olds enjoyed it
Made by M&A Alexander productions and released by Beacon (yes, I know, I said, “Who?” too), it must have been churned out in three days, and it has the clunkiest writing and most amateur acting I have seen in a Western for quite some time. To give you an idea, it makes those John Wayne Monogram pictures of the 1930s look like art films. The plot is laughable, with a masked pantomime villain peering in through the window periodically and all but going “Heh, heh, heh.” And if you don’t guess who the villain is before the end then you are certainly intellectually challenged. True, the average age of the audience was probably ten, but not one of the infant watchers would have had the slightest difficulty in divining who the culpable schemer was.


It’s far too talky, and like a bad play depends on characters endlessly entering and exiting various rather shaky scenery doors. Hollywood was famous for ignoring all ethnic minorities and when they did appear at all, they are, as in this case, offensive stereotypes. Here we have a larcenous Chinese cook (Chinese people were only ever cooks or laundrymen), played, naturally, by a white man (Louis Vincenot) with make-up slanty eyes and protruding false teeth. Even in 1972, when TV screened Kung Fu and needed a hero, they had Bruce Lee on the set as advisor but Warners couldn’t bring themselves to cast him as the lead. David Carradine was safe because he was a Carradine and, well, white. Anyway, this Chinese cook spends his time poisoning a dog and rifling through his master’s desk drawers. 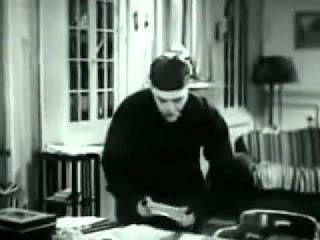 Sinister Chinaman
There’s also a cowhand with a scarred face, who goes by the imaginative name of Scarface (Victor Potel), so we are obviously meant to think of him as the villain (scar = evil) but that was just a distraction. Really he’s a goody. Of course there’s a girl for Big Boy to fall for, Nancy (Constance Bergen). Big Boy wants (a) a ranch, (b) money and (c) the girl (obviously she would come last) and so he can’t propose to her until the last minute of the last reel, when he has them all.
The opening shows Big Boy and his pards watching a rodeo or maybe ranch hands breaking broncs, and the rodeo scenes are so obviously intercut footage from an earlier (doubtless silent) movie that it's painful.


It’s the age-old plot about the son coming back to daddy’s ranch (usually with pal/sidekick) and discovering that pop is dead, murdered in the course of skullduggery, and how the hero solves the crime, gets the property and marries the girl. This plot was more geriatric than the Hollywood Hills even in 1935 and has been re-done endlessly since then too. 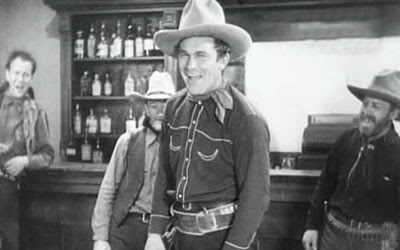 They seem to be having fun anyway. More than the audience, though, I fear.
The boring talking is interspersed with galloping and saloon brawls, all done with silly speeded-up film. The saloon fight is shot on a wooden sound stage so that all you hear is the clumping of boots on the floorboards.


The movie was directed by a certain Albert Herman and written, very badly, by William L Nolte. Stylized and formulaic even by the standards of the genre, it is only just watchable at all.


It is, in fact, eminently missable.