The Plainsman was a big commercial success but suffered terribly from an insurmountable handicap: it was a Cecil B DeMille picture. 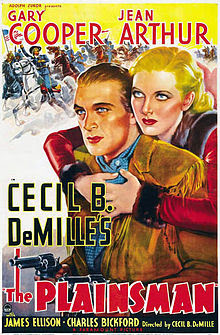 A farrago but a lot of fun
It attempts to telescope the whole history of the West from Abraham Lincoln onwards (Frank McGlynn Sr. very good as Abe, in fact) into two hours. Never one to let actual history get in the way of spectacle, DeMille throws everything in, railroads, Indian wars, Custer, Buffalo Bill and Wild Bill Hickok, and it ends with Wild Bill’s death in Deadwood in 1876. So it goes from one American hero shot from behind to another.


Despite the quite ridiculous distortions, it is in fact rather better written than the usual hokum DeMille efforts and quite amusing in parts. As with many DeMille pictures there was a whole team of writers, so it’s not easy to know whom to praise (or blame), Waldemar Young, Harold Lamb, Lynn Riggs, Jeanie Macpherson, Courtney Ryley Cooper, Frank J Wilstach or Grover Jones. But the story gallops along.
The movie suffers (and Gary Cooper as Hickok gains) from casting because James Ellison is very bland as Buffalo Bill. He soon went back to being Hopalong Cassidy’s sidekick. 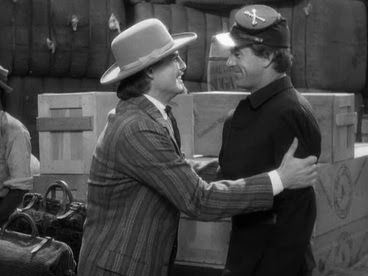 Ellison is a bland Buffalo Bill
Jean Arthur, however, is great fun as Calamity Jane, even if the script has her betray the secret of where the rifles are to the Indians because she’s “only a woman” (DeMille was a notorious male chauvinist). Actually, Jean Arthur was excellent in Westerns. Of course the real Calamity Jane was wildly different but Arthur is a key screen Jane. I think she was a fine actor. 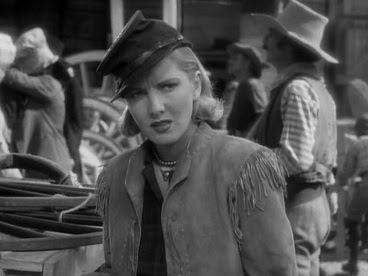 Jean Arthur very good as Calamity Jane
Charles Bickford is excellently evil, if hammy, as the villain Lattimer. He kicks a black porter for dropping some rifles – that’s bad – and of course selling guns to the Indians so that they kill white men with them was very naughty indeed. As for the Indians, they are bad guys and/or stupid and there’s nothing wrong with government policy, no treaty breaking or military incursions. It’s all the fault of the wicked gun runners.


There’s an amusing story told that Anthony Quinn, who was championed by Coop, blarneyed his way onto the cast by telling DeMille that he spoke fluent Cheyenne. Quinn's description of Little Big Horn is gibberish, but DeMille was impressed. The Plainsman was also notable for being the film debut of Hank Worden - as ‘Deadwood Townsman (uncredited)’. Fame at last… 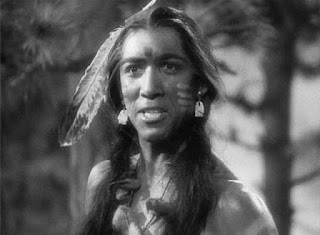 Quinn speaks fluent Cheyenne
John Miljan is a dashing Custer. Porter Hall is the wicked assassin Jack McCall and Paul Harvey is Yellow Hand. Gabby Hayes and Fuzzy Knight are both in there too, which might be thought of as over-egging the pudding. Other names known to Western cognoscenti will be Irving Bacon, Monte Blue, Franklyn Farnum, Chief Thundercloud and Francis Ford, all, as was often the case, in uncredited bit parts. 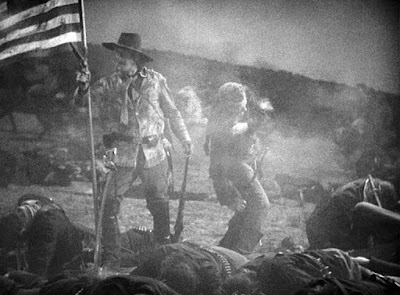 Custer's last stand
Where Cooper scores is that he is a still, tall voice of calm in a whirlwind of action. He is far and away the best thing about the picture. He could do action when it was required (he again did his own riding stunts, including the shot where he rode ‘hanging’ between two horses). I just love the Cordoba hat and brace of pistols over a frock coat. He looks wonderful. He comes across as the only character with any character: he is a fiercely independent man who lives by his own code, is melancholy and saturnine. By comparison the other characters are cardboard cut-outs. 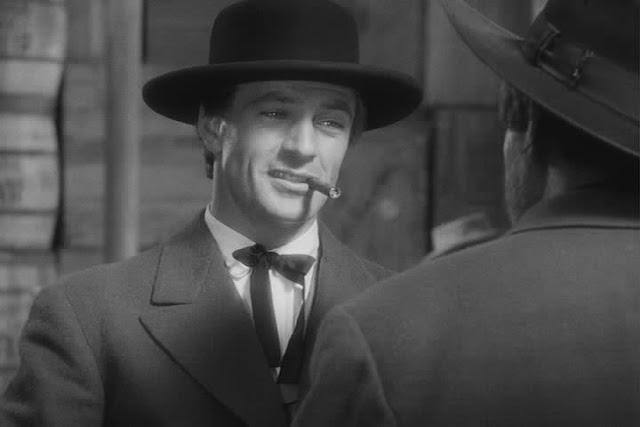 Coop splendid
Like many classic Westerns, it was remade in the 1960s but Universal’s 1966 version, with Don Murray in the Coop part of Hickok, was pale and insipid. It is at least amusing in having Leslie Nielsen as Custer. But we’ll review that another day.
Difficult to award it a revolver rating. If it were just down to DeMille I'd only give it one; if it were just for Coop I'd give it five. I've settled for three.


To be fair, while being a load of unutterable tosh, The Plainsman is a lot of fun. It’s fatuous, occasionally unpleasant and ponderous (well, it would be, it's a DeMille picture) yet it is still watchable today, provided you fix your wry smile on before the titles. 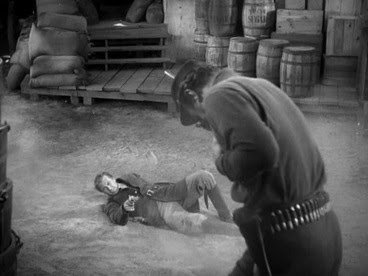