The Homesman by Glendon Swarthout

The Homesman is a splendid Western novel. Glendon Swarthout wrote four Western tales (that I know of), all made into movies, and with great Western stars too. The first was a post-Custer story, 7th Cavalry, which Columbia made into a fun Randolph Scott oater in 1956. In 1959 Swarthout’s novel of the previous year They Came to Cordura, set in the context of Pershing’s 1917 anti-Villa expedition, was made into a fine, tough film starring Gary Cooper, no less, again for Columbia. Then of course Swarthout’s slightly pulpier (though excellent) almost-dime novel of 1975, The Last Shootist, became John Wayne’s last cinematic ride, The Shootist, a Paramount effort this time, with Don Siegel at the helm. Lastly and much more recently The Homesman (1988) was made into a movie, The Homesman, in 2014, with Tommy Lee Jones. All these books are very good but I think The Homesman best captures the spirit of the true West. 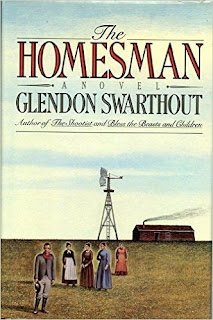 Fine novel
Although it is never specified exactly, various clues lead us to believe that the action takes place in Nebraska (referred to only as the Territory) in the 1850s. As to the time, the town of Council Bluffs, Iowa is mentioned as being far East of where they are, which the eponymous homesman tells us has just been renamed from its former Kanesville (this occurred in 1852). Nebraska was where Swarthout did his research. The early settlement of Loup features and this is perhaps the present Loup City, Nebraska, though in fact that wasn’t established till later.


If you don’t know what a homesman is, and I didn’t before reading this book, it’s a person who takes back East to their families, or to asylums, women who have gone mad out on the frontier. That is the central theme of this novel and it is the brutal but true one of the hardship that settler women endured and how it sometimes broke them, physically and mentally. The opening pages of the book describe very graphically the life of such wives, especially after a tough winter endured in sod houses. Some just buckle under the strain and, tragically for them and those around them (especially their families), lose their minds. 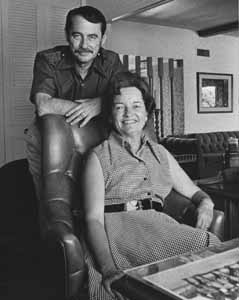 Glendon and Kathryn Swarthout
We meet the heroine of the tale, Mary Bee Cuddy, a fine person, and it is she who volunteers to transport the poor deranged women by wagon back to Iowa, the husbands of the madwomen being unable or unwilling to do so. She is a great creation, a tough, independent and outspoken frontier woman, ‘plain as a tin pail’, unmarried, in her thirties, who has made a go of farming on her own. She is driven by compassion.


But she realizes that she has bitten off more than she can chew. She will never be able, alone, to care for the women, drive the wagon and face down all dangers of the long trek.


It is then that she finds a man, sitting on a motionless horse with a noose about his neck. It transpires that he is a claim jumper, ousted by force from the soddy where he was squatting and then hanged. But the lynch mob lost its nerve and left him tied, expecting the horse to wander off and do their dirty work for them. They do not know that the horse is an infinitely patient Indian pony and simply stands there. On impulse, Mary cuts the man down in return for his sworn oath to accompany her on her voyage, and he accepts.


This part of the story reminds me of an incident in the life of Judge Roy Bean, and I wonder if that’s where Swarthout got the idea. Bean killed a Mexican rival for a girl and the man’s friends left him, too, on a horse with a noose round his neck. The girl later cut him down but Bean was left with a rope-burn and a twisted neck.


We never discover the true identity of the man. Some say his name is Briggs and when asked if that is so, he only answers that it might be. It almost certainly isn’t. Later he announces himself as Jack Martin, but that is equally likely to be an alias. He is in fact an Army deserter and “man of low character”. He too, though, is a splendid creation of Western fiction. No wonder Tommy Lee wanted to play him. Gradually, as the story progresses, Mary Bee influences him for the better, or, if you prefer, his original inner decency reasserts itself. At any rate, he, and she, develop as characters during the journey, and we come to know them quite intimately.


Well, I’m not going to tell you what happens on the trip, or at the end of it, because that wouldn’t be sporting. I will just say that there is a certain wry symmetry to their fates - and readers will understand the oxymoron.


There’s a frontier teacher who, in best tradition of Westerns, has come out from Vermont (though sadly she isn’t called Molly). There’s an action-filled moment when the homesman comes up to a ‘town’ laid out in lots. It’s a scam, one that often happened as Eastern speculators were tricked into investing in future thriving townships which turned out to a confidence trick. People suffer from ‘ague’ and children die of ‘fever’, and of course malaria and diphtheria were commonplace. The bank of Loup goes bust, ruining settlers, and this happened often too with totally unregulated small frontier banks, often run dishonestly or incompetently. Mary Bee sings the ballad Take Me This Token and ‘Briggs’ dances a jig while singing Weevily Wheat. All these details and more give authenticity to the story and convince the reader.


The Homesman is a powerful and gripping book, and if you haven’t read it I urge you to. You will greatly enjoy it.