After High Noon and Springfield Rifle (both 1952), Gary Cooper (the newly-crowned Queen Elizabeth had just had the good fortune to be presented to him in London, which must have been quite an honor for her) decided to live abroad for tax reasons. He made various pictures in exotic locations including two Westerns in Mexico, Garden of Evil and Vera Cruz, one after the other in 1954. The first was classy, the second poor.


“If the Earth was made of gold, I guess men would die for a handful of dirt,” says Cooper at the end of the film, a tad sententiously. This is a gold-lust movie, and a ‘there-and-back-again ride’ film at the same time. It is a story of greed and sacrifice. It’s very good.


A ship has engine trouble off the Mexican coast and taciturn ex-Sheriff Cooper, witty, cynical gambler Richard Widmark (in his second Western after Yellow Sky and very good here too) and low-down adventurer Cameron Mitchell (always top class) are marooned in a Mexican village where Susan Hayward comes to ask for their help. Her husband, Hugh Marlowe, is trapped in a caved-in gold mine. They ride out to help her, but for their own motives. 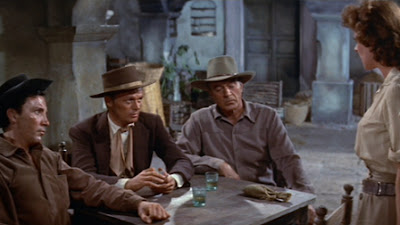 The three adventurers with shady pasts (Mitchell, Widmark, Cooper) meet Susan Hayward
One thing I like about this movie is that the woman is not ‘just’ a wife or a femme fatale, as she so often was in Westerns; she is a real person who acts independently, runs things and shows courage.


Another thing I like is the (to-be-expected) magisterial performance of Cooper and the interaction between him and Richard Widmark. 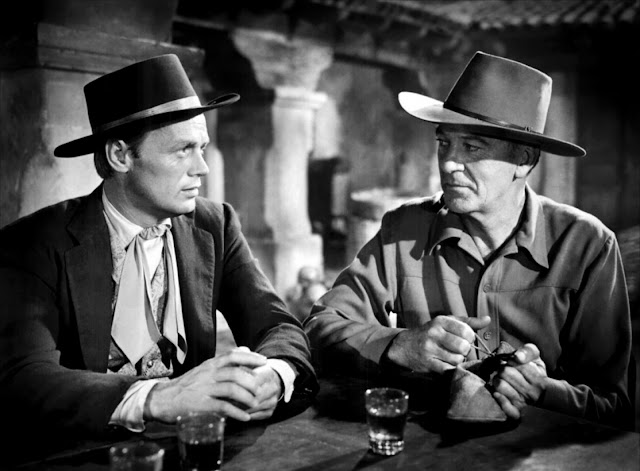 
Filmed in Technicolor on location in rugged country around Uruapan, west of Mexico City, including eerie scenes at the Paricutín Volcano, and photographed, with many twilight and sunset shots, by Milton R Krasner and Jorge Stahl Jr., it is visually very strong. It was the first Western in CinemaScope. The ‘Garden of Evil’ itself is one of the main characters. The Henry Hathaway direction is gritty and fast-paced. Coop always liked Hathaway (they did seven movies together) and the feeling was mutual. Hathaway said that Coop was "the best actor of all of them." He was right, of course.

The Indians are all the more fearsome for not being shown in close-up (we never see their faces) but they are there, as a distant - or near - but always sinister menace.

The title ‘Garden of Evil’ gives a macabre tinge to it, a sort of twisting of the Garden of Eden, and the film, with its exotic setting, is almost more an adventure picture than a Western. Almost. But Coop in his Stetson and six-gun puts us right. Phew.


Frank Fenton was a first-class scriptwriter. The dialogue is pared-down and Hemingwayesque. But the Cooper part, especially, shows wisdom and perceptiveness. Ex-sheriff? I think he was a trained psychologist. The story has a lot in common with The Treasure of the Sierra Madre but this one is more of a Western. Only the music (Bernard Herrmann) I didn’t like; it is overdramatic and sometimes intrusive.


Brooklyn-born Susan Hayward, a great actress, was interesting in Westerns. She had auditioned (with several hundred others) for the part of Scarlett O’Hara but had landed a leading role opposite Cooper in 1939 in Beau Geste. Westernwise, she had to wait till she starred opposite Dana Andrews in the Jacques Tourneur-directed Canyon Passage (a very good film) in 1946. She was female lead in Tap Roots in 1948, and topped the billing in Tulsa in ‘49 (not really a Western). She was outstanding, I thought, with Tyrone Power in the underrated Rawhide in 1951 (a fine Western noir, also directed by Hathaway), and with Robert Mitchum in The Lusty Men in ‘52, a Nicholas Ray film that is close to a masterpiece. It was an excellent track record. I also much liked her late role in The Revengers with William Holden in 1972. She was a fine actor in Westerns and is very good in Garden of Evil. 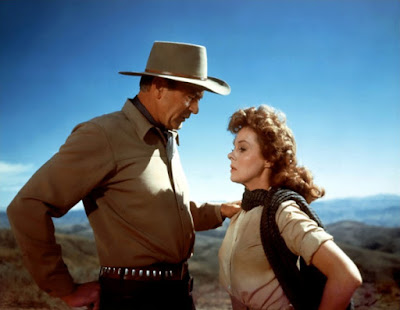 Susan Hayward: fine in Westerns
Worthy of note also is the bearded Hugh Marlowe, who only appeared in seven Westerns (his first was Rawhide with Hayward) and only led in two but he was very good in them. He should have done more. He hasn’t much of a part in Garden of Evil, being trapped in the mine while his wife has all the action, but he’s still good in it. 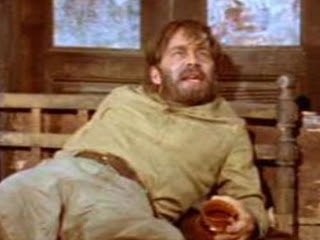 Hugh Marlowe: a small and difficult part but he should have done more Westerns.
He was good in them.
And I’ll also mention Cameron Mitchell because he was good in Westerns too. Of course he stole the show as Buck Cannon in The High Chaparral but he was also excellent in a number of big-screen Westerns. He’d started with a lead role (no mean feat) in 1948 in Adventures of Gallant Bess and had followed that with tenth billing in a 1951 Randolph Scott oater, Man in the Saddle. He’d then been in Pony Soldier and The Outcasts of Poker Flat and was always memorable. Later, after Garden of Evil, he would do The Tall Men and Hombre, and would take parts in TV Westerns and spaghettis. But he’s always worth looking out for. 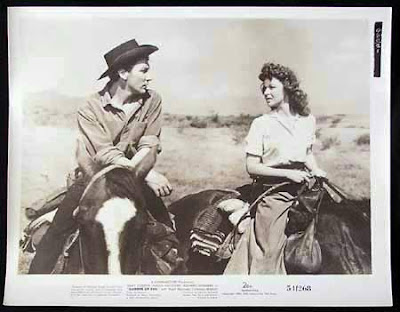 Cameron Mitchell, always worth watching
Garden of Evil is a terrifically good film, miles and miles better than Vera Cruz the same year, and it ranks high in the corpus of Gary Cooper Westerns. Coop made a handy $300,000 for it and had good reason to be pleased. It wasn't High Noon but it was a Fox picture with Hathaway and it was a damn sight better than those earlier 50s Warners junkers Dallas, Springfield Rifle and Distant Drums.

Adventure movie
Widmark, who liked Cooper, said, “He made his work look effortless – as if he were doing nothing – you saw no wheels turning – what every artist in any field tries to achieve.”


And another thing. Coop doesn’t take his hat off the whole movie.