Coop scouts for the wagon train

Gary Cooper starred in only three Westerns in the 1930s, The Texan (1930), Fighting Caravans (1931) and The Plainsman (1936). This is quite surprising. He had started in Westerns, was an obvious Westerner and had, er, shot to fame in a Western (The Virginian in 1929). One would have thought that out of 40-odd films he made in the decade, Westerns would have figured more.


Fighting Caravans was a much bigger affair than the modest The Texan of the year before. Coop was beginning to be recognized now as the fine young actor he was, and with star quality. He had been a foreign legionnaire in Morocco between The Texan and Fighting Caravans and that had been a big hit. 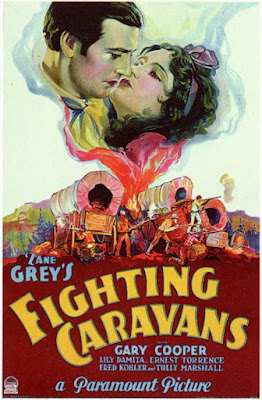 Coop's becoming a big star
Fighting Caravans was another big wagon-train movie, like Paramount’s 1923 silent The Covered Wagon or Fox’s Raoul Walsh-directed talkie The Big Trail (1930). In many ways it was a riposte to Fox: Paramount had to do a talkie covered-wagon picture too. Only a year after The Big Trail, it is technically far superior (or at least existing prints are). The sound is good and the acting is less heavy-handed and obvious, though hardly subtle by later standards; it still seems a silent movie with sound tacked on.


It’s not such an ambitious film as The Big Trail and there is a cast of hundreds rather than thousands. The Depression was on, after all. Still, it’s impressive enough and there are the river crossings and Indian attacks.


There’s a bad guy who sells wagon trains out to the Indians. There are two cranky old-timers who have raised Gary Cooper from a boy, Ernest Torrence and Tully Marshall – Tully as the great Jim Bridger. He had played a very similar role in The Big Trail. They provide broad humor, doubtless hilarious in the early 30s though a little less so to us now. Clint Belmet (Coop, boyish in buckskins), is the young scout who falls for and pretends to be married to a French girl (just like young John Wayne and Marguerite Churchill in The Big Trail) bravely heading out West alone. She is Lili Damita, who is pretty and acts better than most cast members. Gary Cooper got $8000 for this movie but she got four times as much. (She later married Errol Flynn). 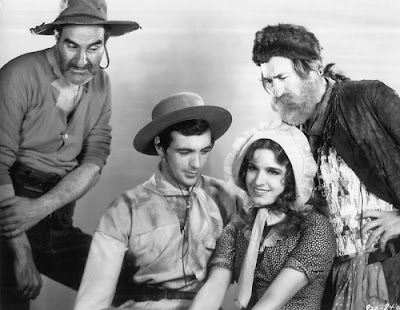 The Indians are treated as simpletons. They want a fire engine in order to make firewater.


There’s some nice photography, long shots of wagons trailing back into the distance and, as in The Big Trail, some fine California redwoods at the end of the movie, with the light filtering down between them. Lee Garmes and Henry Gerrard were the cameramen. We get dust in the desert and snow in the Rockies. 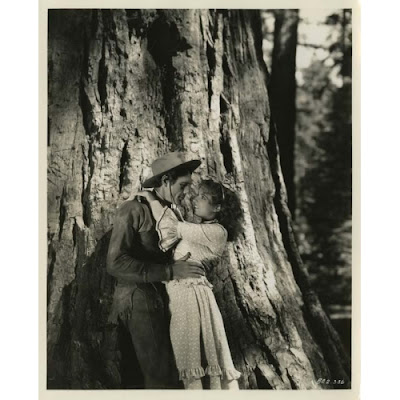 "Will you marry me, yes or no?"
"Oh, oui, monsieur!"
Directed by Otto Brower and David Burton, neither particularly noted for other great Westerns and neither of Raoul Walsh quality, the Zane Grey story rattles along at a good enough pace (not always the case with such movies; the plot sometimes moves at the plodding pace of the oxen).


It’s a fairly standard tale of freedom of the wilderness set against the bondage of matrimony. Coop finally proposes and agrees to eat with a napkin around his neck for the rest of his life. Of course it won’t last. 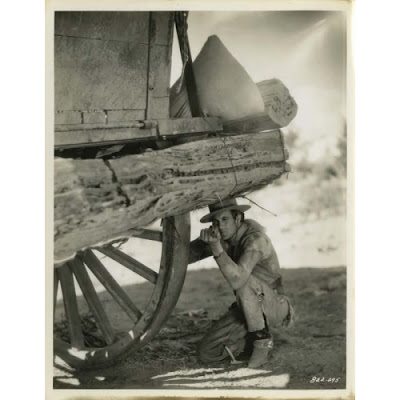 Brave scout Clint
One interesting aspect is that the movie was made just before the Hays Code came into force and so the hero can pretend to be married to Lili but not be, and the film makers can get away with Coop saying lines like, “Seein’ we’re ‘married’, we ought to get better acquainted”.


Fighting Caravans, aka Blazing Arrows, is an entertaining Western that stands up surprisingly well.


All in all, though, it was a bit run-of-the-range, and more fun was Coop’s gangster picture which he made the following year, City Streets written by Dashiell Hammett. But that’s another story and for another blog…