I don’t know what it was about early 1950s Warners Westerns but they never quite seemed to get it. This one has Gary Cooper but that’s all you can say for it. It reminds me of a silent movie with the dialogue cards replaced by speaking. Although made in 1950, in plot and direction it could have been 1930. The Max Steiner music is desperately old-fashioned and the coming and going across the screen of galloping posses reminds you of old Lone Ranger episodes. Just compare what Stanley Kramer did with Cooper in High Noon or what Henry Hathaway did with him in Garden of Evil with what Warner produced in Springfield Rifle or this clunker. Warners seemed to think that all Westerns had to be just big Saturday serials or color B-pictures with stars. Distant Drums the year after wasn’t much better. Unfortunately, Coop had a long contract with Jack Warner. 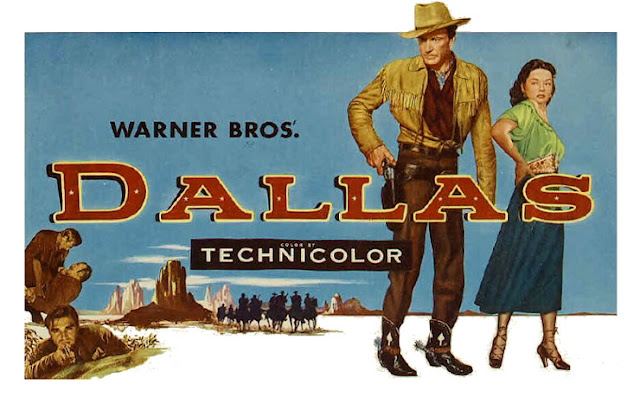 Old-fashioned
Cooper hadn’t had a hit movie since For Whom the Bell Tolls in 1943 but these Warners B-Westerns weren’t going to help one bit. Many thought he was washed up and Coop himself was inclined to share their view.


The director was Stuart Heisler, which didn’t help. Heisler was a plodder and had done the less-than-stellar Along Came Jones in 1945, Coop’s first post-war Western - although Jones was a lot better than Dallas.


Somewhere behind the studios in California has to pass for Texas. The Ernest Haller photography is perfunctory. The John Twist screenplay needed one; it is utterly predictable – and far too talky. Twist had done a good job with Raoul Walsh on Colorado Territory but evidently couldn’t be bothered here.


The music is by Max Steiner but instantly forgettable. 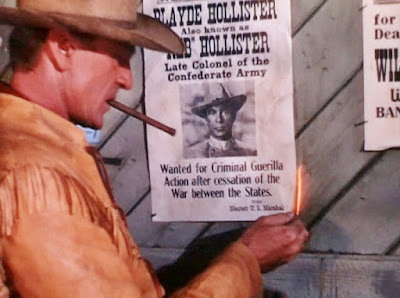 That's the way to deal with a wanted poster
The supporting roles are average, except for Raymond Massey who is awful as the chief bad guy. He plays it like a villain in 1920s silents. I’m surprised he didn’t look at the camera and go, “Heh heh heh!”


The beautiful Ruth Roman is the leading lady but poor thing, her part is lousy.


Reed Hadley hams it up as Wild Bill Hickok but luckily is soon written out. Monte Blue and Will Wright are briefly glimpsed, as a sheriff and judge respectively, so that’s something anyway. Both were disgracefully uncredited, though. 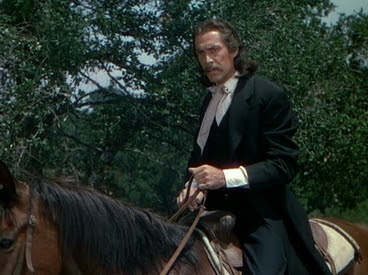 Reed Hadley is Wild Bill
Gary Cooper is, naturally, excellent but he only had to be ordinary to stand out in this crowd and even he can’t do much with the wooden script. “He can still look askance at a varmint more contemptuously than anyone else.” (Bosley Crowther, New York Times review, January 13, 1951).


Actually, apart from Coop there is one tiny thing good about this Western: they have really groovy little rectangular US Marshals’ badges.


You’ll have to watch this movie at least once because it’s a Western with Gary Cooper in it but I’m afraid I wouldn’t recommend a repeat viewing. Buy a DVD of Garden of Evil instead.