Light and low-budget, but entertaining

We think of Gary Cooper as the quintessential Western star. Yet in the 1930s he only did three Westerns (true Westerns) and the 1940s were no better: if you discount as Westerns (as you must) Saratoga Trunk and Unconquered, he also only did three, The Westerner (very fine), the Canadian silliness North West Mounted Police and the light and comedic Along Came Jones. (Luckily, in the 1950s he made nine, but that’s another story.) 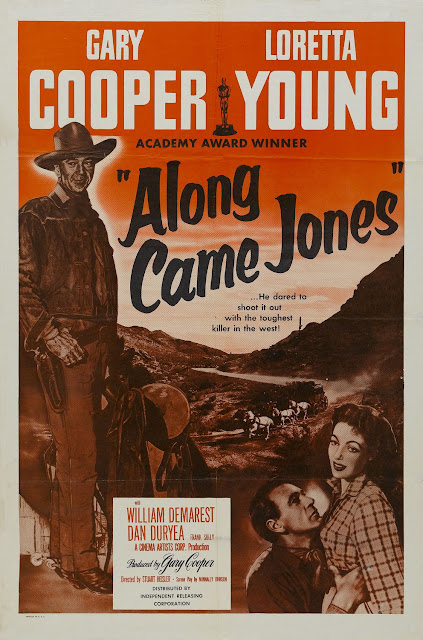 A light and slight movie but a fair bit of fun
The credits on a modern DVD of this movie say it is a United Artists film, an MGM one, it’s an International Pictures Inc production and so on. Only RKO is not mentioned. Anyway, Gary Cooper produced it, his first venture, and acted in it and he got Loretta Young and Dan Duryea to star with him and RKO released it. It’s a fun little Western.


Producer Cooper tried to save money. One way was to have Loretta Young use off-the-peg dresses rather than expensive tailor-made ones. Young’s dresser agreed to this as long as Coop himself told Loretta about it. Coop hurriedly backed off and Loretta got her high-price gowns. 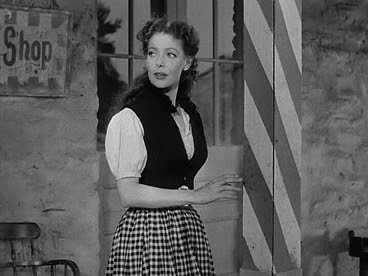 Loretta got her tailor-made costumes
Billed as “Nunnally Johnson’s Along Came Jones”, the film’s screenplay was by co-producer Johnson from an Alan Le May novel. It’s a mistaken identity yarn. Coop is Melody Jones, singing cowboy (fortunately he doesn’t sing much) whose initials MJ on his saddle lead the townsfolk of Payneville (pronounced ‘painful’ for a running gag) to mistake him for Monte Jarrad, evil gunfighter wanted for robbery and murder.
The mistaken identity wheeze was hardly new then and it was later milked for all it was worth. Think of James Garner being taken for the notorious gunslinger in Support Your Local Gunfighter, for example. 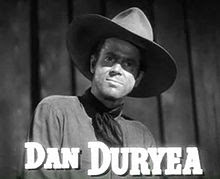 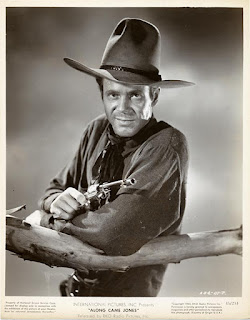 Dan Duryea overacts unmercifully, as was his wont, but is very entertaining
The real Monte (Dan Duryea) is being sheltered on a farm by Cherry de Longpre (Young), who is fast falling out of love with him. That’s because he’s mean. She seems to prefer Melody, a cheerful incompetent who does her bidding and gets into the most terrible scrapes as a consequence.


It’s a small movie with a limited cast (Russell Simpson is a wonderful Pop de Longpre) and filmed almost exclusively on a studio set in black & white, with much back projection. There are no sweeping vistas or impressive scenes. Nunnally Johnson said, “We shot Along Came Jones in that same saloon that everybody got shot in on the lot.” It’s an intimate piece (a polite way of saying ultra-low budget) which nevertheless rattles along at a good enough pace. 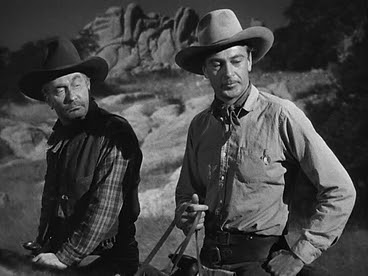 William Demarest as amusingly-named sidekick George Fury
Somnolent William Demarest is Melody’s sidekick George Fury and has some amusing lines but his New York accent grates a bit. Dan Duryea developed into a great actor, but later. Director Stuart Heisler didn’t seem to have the nerve to tell his producer to cool it and Coop hams it up dreadfully. Still, he comes across as very charming in his gauche, butter-fingered way and even as a cowboy Quixote, always gallant, always defeated.


Ray Teal and Chris-Pin Martin have bit parts. Always nice to see them. 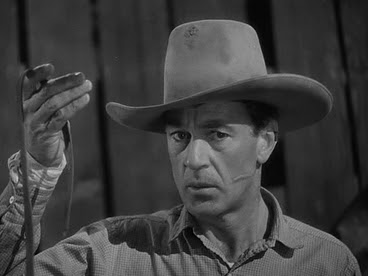 Bumbling incompetent wins out in the end
Duryea said that Coop was “the greatest exponent of the manure kicker school of acting. The idea is to scuff around barnyard dirt while muttering some phrase like ‘Aw shucks, Miss Nancy.’” Cecil B DeMille, who had directed Coop in The Plainsman and North West Mounted Police, was critical of Along Came Jones: he said to Cooper, “If you kid a Western, if you kid a hero, you are doing yourself damage.” Actually, though, in some ways Coop’s performance as a bumbling incompetent cowboy works just because he was already established as the authoritative and tough Wild Bill Hickok or The Virginian in earlier roles. And Jones was popular and a modest box-office success.


Standard black & white photography by Milton Krasner (he didn’t have much to do) and equally standard music by Arthur Lange are both undistinguished.


Along Came Jones was thin, it was light but it was pleasant and it’s fun. And it made money.


And for the 1940s, that’s all she wrote. Coop didn’t get back in the saddle till 1950, and then for the undistinguished Dallas. After the stellar start of The Virginian in 1929 his Western career was languishing…