1867. The territory of Nebraska has just become a state. The eponymous resident of the film’s title is the 6’4” handsome Indian scout Wade Harper (Philip Carey, billed as Phil). The Indians - of unspecified tribe - are revolting, with a truculent Jay Silverheels as their chief, Spotted Bear. In a role reversal from the usual Hollywood Indians, it is his son, Yellow Knife (Pat Hogan) who is the statesmanlike one who wants to negotiate peace with the white eyes but firebrand dad, Mr. Bear, wants none of it. He urges his braves onto the war path. 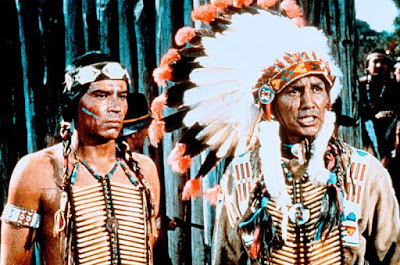 Yellow Knife and Spotted Bear
Pretty much a standard 1950s Columbia B-Western, The Nebraskan does have its points and in fact is quite a lot of fun. Carey is solid as the brave hero in buckskin, there’s a slimy no-good gambler with a fancy shirt and a derringer (Richard Webb), there’s his wife, Paris (Roberta Haynes), who turns out to be only a common law wife and so living in sin - and amazingly the movie was banned in Sweden – and there’s Lee Van Cleef as a murderous Army deserter whom Phil captures but who is a serial escaper. Dennis Weaver is a dumb Army captain. Oh, and ornery old-timer Wallace Ford does his usual great act. It’s not a bad line-up. 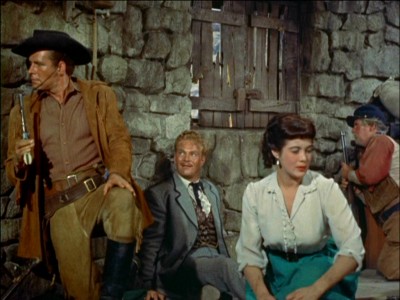 Under siege: noble scout, cowardly gambler, gambler's partner (erstwhile flame of scout) and ornery old-timer. Carey, Webb, Haynes, Ford.
Eventually they hole up in Wallace’s cabin and are surrounded by attacking Injuns, so much of the movie is a siege tale. But there’s quite a bit of adventure before then, from the high-speed horse chase in the opening scenes onwards.


In 1953 there was a short-lived craze for 3D and so there is much stabbing and shooting arrows directly at the camera and one scene of the stagecoach which, seen now in 2D, appears to have bizarrely moving rocks in the foreground. It’s quite nicely shot in Technicolor, with the usual Columbia locations of Simi Hills, California standing in for Nebraska, by DP Henry Freulich (his nineteenth B-Western). 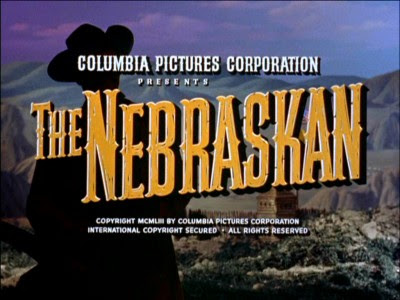 Watchable
The director was Fred F Sears. Fred started in stage productions in his native Boston but made the move to Columbia where he stayed, directing low-budget  Westerns, including Charles Starrett Durango Kid oaters, though his best film is generally considered to be the sci-fi epic Earth vs. Flying Saucers. He got pace in his movies, though, and action. There were worse directors of horse operas.


Huge numbers of Indians are shot down in frontal assaults of the cabin and it is never made clear why Chief Silverheels should so badly want to kill the inhabitants. And, as often happened in movies, the Indians endlessly gallop to and fro' across the front of the cabin allowing the defenders to shoot them off their horses. Doh. 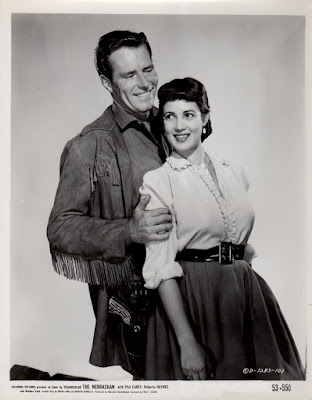 Carey & Haynes: scout in buckskin and former flame
It was written by prolific Western screenplayist David Lang, who worked on many a B-movie as well as a host of TV Western shows. It’s a workmanlike if conventional and uninspired script.


Carey is probably best known for patriarchal roles on TV in the 1970s and 80s, especially the soap One Life to Live, but he did a lot of crime and war films in his earlier days, and nearly a hundred big-screen and TV Westerns, starting with Springfield Rifle in 1952. He had a big role in Calamity Jane in the same year as The Nebraskan and was quite well known. Also the same year he was in Gun Fury with Rock Hudson and The Man Behind the Gun with Randolph Scott. From 1954 on he began to lead in B-Westerns, many directed by Fred Sears. He wasn't bad. 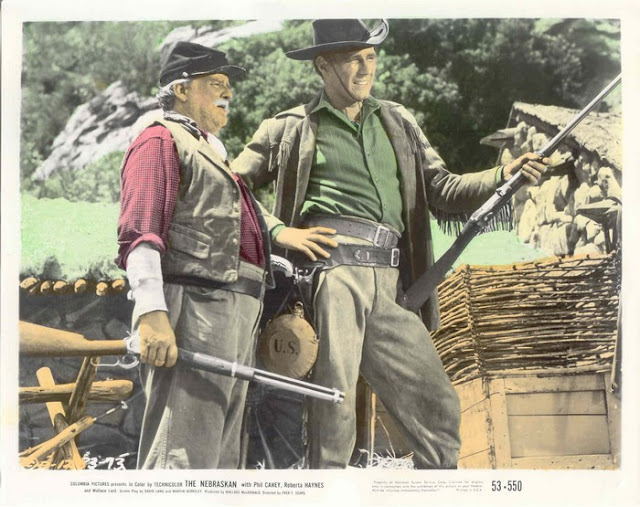 Wallace Ford, always entertaining
Well, you could do worse than The Nebraskan and it would repay a watch, if you are not too demanding. I've probably been a bit over-generous in giving it a Jeff Arnold three-revolver rating but it's a tad better than the two-revolver pulp we often got in those days, and the cast is good. 1953 was of course an epic year for our noble genre and this movie was by no means the worst example in that splendid time. Happy trails, e-pards.