Fine film. A Western? Probably not.

The Hi-Lo Country is a very good movie, even if it’s not really a Western. Walon Green (of The Wild Bunch fame) adapted Max Evans's 1961 novel ‘The Hi-Lo Country’ for the screen and Stephen Frears, English director of My Beautiful Laundrette and The Grifters, did a great job on it. It tells of two young men just back from World War II who try to make a go of running cattle but find that the old ways have gone. You can’t drive steers to market any more (that’s for the movies); you have to ship them in trucks, which only the big ranchers can afford. Sam Elliott is the smiling, ruthless rancher (he even smiles when someone pisses on him) who stayed home while the boys were fighting. He snatched up all the small spreads. 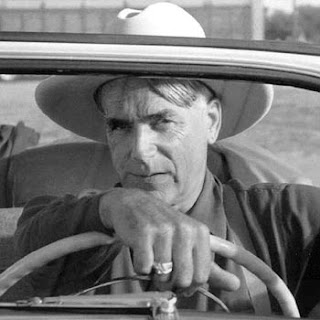 Sam Elliott, ruthless rancher
The two men are more than friends. They are bonded together. It’s like Brokeback Mountain for straights. And talking of straight, trouble comes when both fall for the same dame, a sultry married redhead (Patricia Arquette) who, however, while suitably available, somehow lacks the real sex appeal. There is no electricity. Why one of the boys, who has Penelope Cruz in the wings, favors Arquette instead is a total mystery to me: Cruz is not only drop-dead gorgeous, she also acts subtly and perceptively. Still, no accounting for taste, I guess. 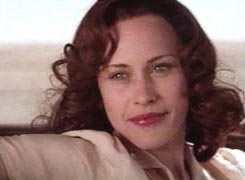 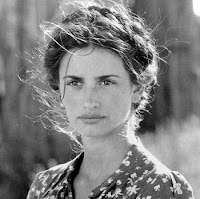 No contest
Billy Crudup is Pete Calder, the quiet, brooding fellow who narrates the story, sometimes a bit portentously, and his friend is Big Boy Matson (Woody Harrelson), who is larger than life, charismatic, edgy, unpredictable, dominant, the real alpha male, a man on fire. It’s an electric performance. 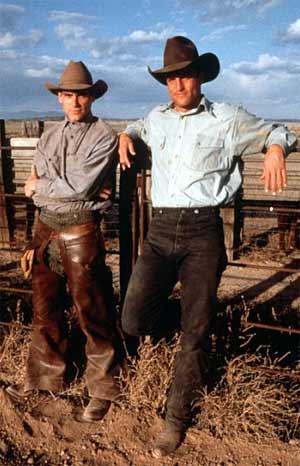 The friends
The wonderful Katy Jurado, in her seventies, has a tragically small (yet stunningly good) part. She is a fortune-teller. The boys visit her and want to know if "all of us who are here will be alive and prosperous next year." She gives them a brutally abrupt answer. 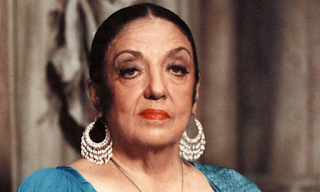 Katy Jurado
James Gammon has more to do as the old rancher who befriends the boys and he is the archetype of the old, doomed ways. A great performance. Another star is the landscape, arid northern New Mexico photographed by Oliver Stapleton. This is a beautiful picture to look at. You feel the almost impossibility of winning a living from this land and how extraordinarily tough farming and ranching must have been on it. New Mexico seems open, huge, empty, dusty. Well, it often is.


So yes, a very good motion picture, to be seen, and to be seen, if possible, in a movie theater rather than on a small TV screen.


But it’s not a Western. Not as I understand it. Many people think of it as a Western and the actors wear cowboy hats and ride horses and have guns, so it’s on this blog. But it’s not a Western because it’s too much a love story and too modern and not enough of a frontier tale. The voiceover narrative makes it an introspective piece and Westerns were never that. Even if one of the characters does ride, er, drive off into the sunset at the end.