Columbia, like all the big studios, was happy in the 1950s to cater to the demand from audiences for horse operas. They had regulars like Randolph Scott but they also tried out the occasional other actor as Western lead. It didn’t always take. Such was the case with The Black Dakotas, which starred Gary Merrill.

Skippable but you could watch it if you had to
Merrill had first been used in a Western in 1951 when he did the voiceover intro and outro for Fox’s excellent but underrated Rawhide in 1951, and indeed he later made a specialty of narration, voiceovers and commercials. Black Dak was his second Western and first as lead, and in fact, although he made many later appearances on Western TV shows, it turned out to be his only star part in the saddle. Actually, though, he was quite good, and it’s also refreshing having an out-and-out bad guy as the star. 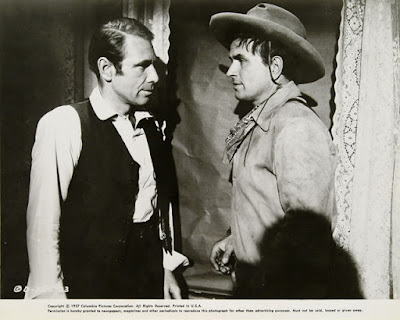 Gary Merrill in an unusual (for him) Western lead role, with the great Noah Beery Jr
Mind, he benefited from very indifferent support acting. The good guy is the ineffably bland John Bromfield, who may have aspired to Rory Calhoun-ish beekcakery but was basically a third-rate actor. His biggest Western part was probably his first, as Clay Jeffords in The Furies but even there he was pretty forgettable. He was in loads of TV Westerns but really he was pretty much a nonentity, allowing, in Black Dak, star Merrill to shine.


Bromfield plays a stage line owner who speaks Sioux and wants peace with the tribe in the Dakota Territory. Most of his fellow townspersons, however, seem to believe that the only good Injun is a dead one and wants the Army in to exterminate them. Bromfield woos the equally untalented Wanda Hendrix, as feisty frontier gal Ruth. La Hendrix looked vaguely Bette Davis-ish, in a more petite way, and maybe Gary Merrill, who was Mr. Bette Davis, had a hand in the casting, who knows. Anyway, she’s no good, which also serves to highlight Merrill. 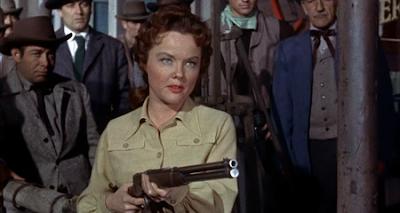 Wanda Hendrix as feisty frontier gal
The only decent Western actor ready to offer a challenge to Monsieur Merill is Noah Beery Jr. He plays a Confederate sympathizer ready to help badguy Merill in his plot to stir up the Sioux into open warfare, in order to divert Union troops to the frontier from their task of fighting the breakaway states (for the story is set in 1864). Unfortunately, though, poor old Noah can’t do much with the clunkily written lines he has, and is also obliged to enter and exit Merrill’s hotel room by the window, always a hazardous enterprise for an actor which risks (and indeed does incur) ridicule. The aforesaid clunkily written lines were penned by Ray Buffum, who worked on The Big Sky but you wouldn’t know it.


The Indians, as is traditional, are split into factions, one led by the statesmanlike John War Eagle, ready to negotiate and consider peace, and the other a band of hotheads eager to take the warpath, this group headed up by bellicose Jay Silverheels as Black Buffalo. You may guess which side prevails, as it always did in movies. 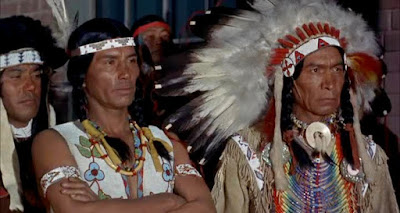 Bellicose Jay Silverheels with statesmanlike John War Eagle
James Griffith also has a small part as a henchman. I always like to see Mr. Griffith. With that thin frame and hawklike face he made a good baddy.


The movie was directed by Ray Nazarro who started in silent movies and graduated to directing for Poverty Row studios in the 1930s. He directed dozens of B-Westerns for Columbia in the 1940s and 50s, including some of the Durango Kid series with Charles Starrett. His first Western as director was Song of the Prairie in 1945 and he was still directing episodes of Fury on TV in 1960. He was a journeyman who turned out low-budget B-movies on time and on budget and as such was liked by Harry Cohn and the other studio bosses. 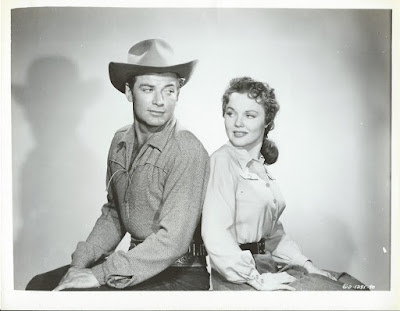 Bland good guy Bromfield with equally uninspired Wanda Hendrix
Actually, he didn’t do that bad a job on The Black Dakotas. There is at least a fair bit of action. But with an improbable plot, bad screenplay and iffy acting he couldn’t do much. The look of the film is OK, though, as was usually the case with 50s Columbia oaters. It’s in a nice Technicolor and well shot by DP Ellis W Carver (this was the fourteenth of his many B-Westerns) in attractive Iverson Ranch and Simi Hills locations. They do resort to that annoying speeded-up film to accelerate horse chases, which always looks very silly now.


A bit of a clunker, all in all, but just about watchable.