1953 was, as we know, one of the greatest years in the whole history of the Western movie. Among the 95 Westerns released that year (oh happy day) there were giants of the genre such as Shane and The Naked Spur but also superb smaller examples such as Hondo, Escape from Fort Bravo and The Man from the Alamo. Let us not, however, forget that there were, among the 95, plenty of lesser films which still had merit. Such a one was San Antone. 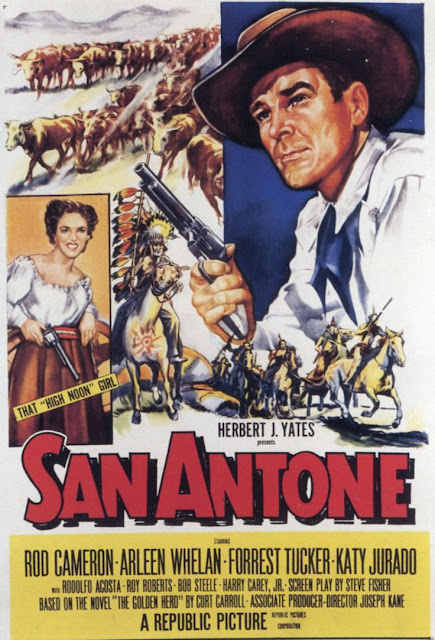 Fun
On one level, San Antone (not to be confused with the 1945 Errol Flynn vehicle San Antonio) was just another black & white Rod Cameron B-Western from Republic, but actually it was more than that. The cast, for one thing: Forrest Tucker, Katy Jurado, Rodolfo Acosta, Harry Carey Jr. and Bob Steele; it’s a great line-up. And the picture has plenty of action and even a grand historical sweep to it. It may not be John Ford but it’s no zero-budget knock-off either.


It’s an 1860s Tex-Mex story. 1861: we see Abe (Richard Hale) waxing eloquent in Washington, a San Antonio townsman yells the news of Fort Sumter and the Stars and Bars are raised. It’s a low-budget way of having the Civil War on screen. Carl Miller (Rod Cameron), though, doesn’t join the Confederate ranks. He announces that he doesn’t "believe in Americans fighting Americans”. But he’s a good son of Texas and, as a civilian, he drives a cattle herd to an unspecified destination, we presume to feed the Confederate army. 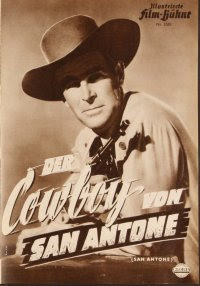 Rod is der Cowboy von San Antone
His arch-enemy is the odious Brian Culver (Forrest Tucker), who does join up and is now the elegantly-uniformed Lt. Culver, CSA. Rod manages to get Culver assigned to escort his cattle drive, which does not please Forrest one bit. The two are shown as rivals for the hand of Southern belle Julia (Arleen Whelan). This doesn’t work, though, as Julia is one of the most unpleasant women ever seen on screen. She is a manipulative, murderous slut, and the chances of good guy Rod falling for her are less than zero. Forrest, yes, because he’s as slimy and treacherous as she is. But Rod? Perish the thought. 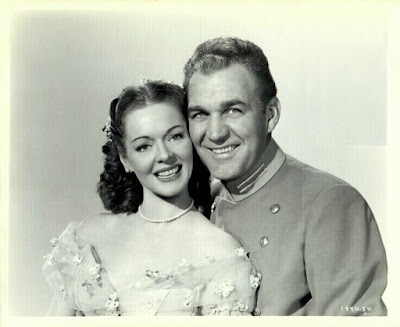 They look nice here but they are really nasty baddies, and they deserve each other
Still, that’s the set-up. Rod, in fact, has really lost his heart to Mexican beauty Mistania, and as Mistania is played by the truly wonderful Katy Jurado (the year after High Noon), no wonder he has fallen for her. Mistania is passionate and Spanish and voluptuous – and fiercely jealous of the spoilt brat Julia. In fact they have a famous knife fight. Mistania’s brother is Rodolfo Acosta, whom Julia has decided on a whim to have hanged, but Rod saves him. Rodolfo sets out for Mexico to fight with Juarez against the evil French invaders of Maximilian, and becomes more or less a bandit, though he has a photograph of Juarez on his desk. 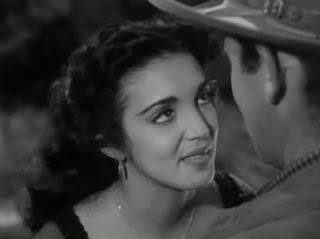 Katy romances Rod
Well, there is much derring-do and not a little skullduggery. Rod and his singing cowboys (Dobie Carey as Dobie, Bob Steele as Bob and Jim O’Hara as Jim) are captured by Union troops and incarcerated for the duration of the war but cowardly Culver flees and avoids capture. After the war, the boys are released and learn that Culver, now a major, has been taken prisoner over the border and held for ransom. They go down to old Mehico to get him…


That’s basically it, though there are many twists and turns of the plot.


The movie was produced and directed by Joseph Kane, Republic’s top Western man who directed a lot of the John Wayne oaters of the 40s as well as many a Gene Autry and Roy Rogers flick. 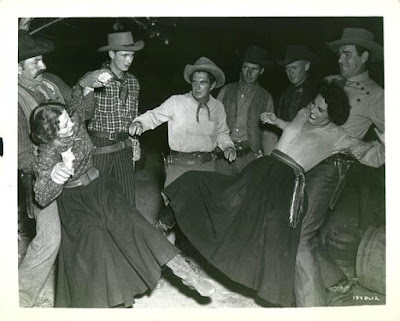 The famous knife fight. Sadly, Arleen survives.
A very charming aspect of the movie is the music, by R Dale Butts. It’s variations on the theme of various songs of the period, Shenandoah, John Brown’s Body, Ten Thousand Cattle, Streets of Laredo, and so on. Quite often the actors sing. We know Dobie had a pleasant tenor voice but even Bob Steele has a go.


Bud Thackery was DP and the black & white photography of Vasquez Rocks is often attractive, though the print I saw was pretty ropey.


Rod Cameron does his tall tough-guy act. He talks about poppers and a don attack, which made me wonder, but it turns out that he was referring to paupers and an attack at dawn.


Anyway, I quite like this movie. I have rather a soft spot for it. And of course I have been in love with Katy Jurado ever since I first saw her. I was really glad when Rod fell into her arms in the last reel and the evil Arleen was sent packing with Forrest - they deserved each other and their lives together will undoubtedly be hell.