Charlton Heston’s three first Westerns, The Savage (1952), Pony Express (1953) and Arrowhead (1953), were less than glorious affairs. They were all second-rate and in addition Arrowhead was toxic.


Charles Marquis Warren directed the picture and wrote the screenplay, adapting WR Burnett’s novel Adobe Walls. It purports to be a screen version of the life of Al Sieber (1843 or 44 – 1907) and on-screen text announces:


The character of Ed Bannon [the part played by Heston] was drawn in part from the actual Chief of Scouts of the United States Army of the Southwest – Al SIEBER. Born – 1855; killed – 1907.


I don’t know which part. This Bannon bears no resemblance whatever to Sieber either in the facts of his life or the kind of man he was. In fact Heston’s Bannon is a sociopath (or even a psychopath, Robert Hare describing psychopaths as having no sense of empathy or morality, but sociopathy as only differing in sense of right and wrong from the average person). This Bannon is a racist murderer and a sadistic and bitter man, and Al Sieber was none of these things.

Best avoided in any language
We are also told that the movie was shot in the “actual locale” of the events it describes, Fort Clark. Fort Clark is in Bracketville, Texas, and as far as I know Al Sieber never went there (and Dan L Thrapp, in his definitive biography of Sieber, does not even mention it).


They can’t even get Sieber’s dates right. He was born in Germany in 1843 or 1844, depending on whom you read, but certainly not in 1855. And saying “killed” implies that he perished at the hands of the Apaches, whereas he died in an accident. 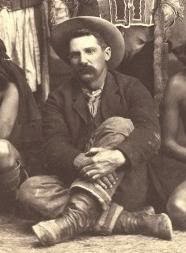 Al Sieber
As I have said before, I have no objection to unhistorical Western movies. They are not supposed to be documentaries. But when they claim to be historical and are clearly preposterous twaddle (Heston’s Pony Express was another) then they lay themselves open to criticism.


Anyway. It’s supposed to be May 1886. The (fictional) Apache Toriano has been East to school but is now back to lead his people in rebellion against the white eyes. Toriano is played by Jack Palance, rather well. Ed Bannon, sour and churlish Army scout (the Confederate gray pants he wears showing his general bolshiness), creeps up behind two Apaches waiting for Toriano, says, “Turn around, dirt” and when they do he shoots them both dead with his rifle. Another Apache tries to get Bannon but unfortunately Bannon’s sidekick, Sandy (Milburn Stone, Doc from Gunsmoke) shoots him too so Bannon is saved. Rats. 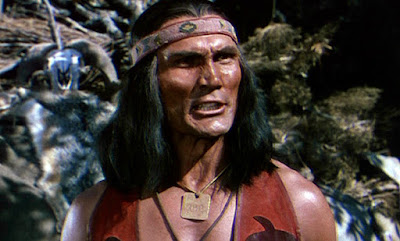 Jack Palance is Apache chief
That sets the tone of the film. A colonel (Lewis Martin) has been ordered to try to make peace with the Chiricahua but Bannon sneers at the very idea. The colonel soon meets his maker. There’s a sensible captain, though, played very well by Brian Keith (one of his best performances, I think). Capt. Keith has an on-off relationship with Bannon, despising him as a renegade who won’t obey orders, yet finally supporting him in his murderous intent. The sergeant is the excellent Robert J Wilke (only 1953 and already his 118th Western appearance; Arrowhead was one of eight in this year alone!), who is also a bit on the rough side but also comes round. Keith and Wilke make a convincing Army pair and, with Katy Jurado, are the best thing about the movie. 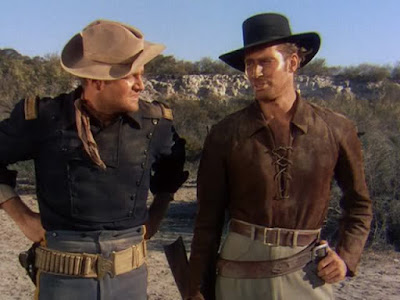 Brian Keith excellent as Army captain. Heston closer to a can of tuna than to Al Sieber.
Yes, there’s a half-Apache woman, the fort laundress Nita, played by the wonderful Katy Jurado (the year after High Noon). Bannon uses her but mistrusts her, rightly as it turns out. She tries to kill him. Heston holds her down viciously, sneering at her through those clenched teeth, “The Apache in you finally came out.” When she stabs herself, Bannon looks down at her body and says to some soldiers, “There’s a dead Apache in here. Get it out.” Charming fellow, isn’t he. Ms. Jurado was voluptuous and sensual and utterly marvelous in the Westerns she did, which were rather B-movie affairs after High Noon (except Broken Lance). 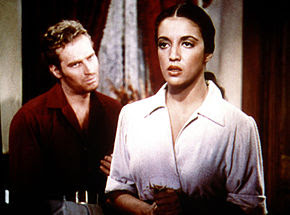 Katy Jurado splendid as always
Toriano is no saint either, mind. He shoots down in cold blood his white blood brother (John Pickard), which is not very sporting. There’s an Apache Army scout, Jim Eagle (Pat Hogan, a Kickapoo who often played Indians in Hollywood and TV Westerns) though it isn’t clear for most of the movie which side he is on. He does not die peacefully in his bed. Sidekick Sandy comes to a 'sticky' end too and is made to look remarkably like medieval paintings of St Sebastian. 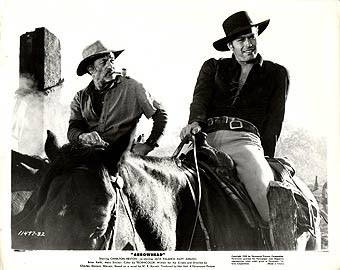 Heston has as crusty sidekick Milburn Stone
Toriano urges his people to do the Ghost Dance (a predominantly Lakota phenomenon of the 1890s so I don’t know why the Chiricahua are doing it in 1886).


There’s a dramatically inevitable but absurd one-on-one mortal combat between Bannon and Toriano as the climax of the movie. You may guess who wins out. I was rooting for Toriano.

The trailer is almost worse than the movie. It begins, “In the great Western tradition of the immortal Shane, Paramount NOW presents” (as if the two movies were even in the same league) “Arrowhead.”
“The least known of the Indian scouts was Ed Bannon, portrayed by rugged Charlton Heston,” announces the trailer, sonorously. Well, there’s a reason that Ed Bannon was the least known: he didn’t exist.  “Now the secret history of the Apache war is revealed for the first time!” shouts the trailer. “The most amazing story to come out of the West! All the more THRILLING because it’s TRUE!” This isn’t really just commercial hyperbole. It’s what's called a lie.
As for Heston and Katy Jurado, “violence was to be his destiny, even from the women who loved him. Katy Jurado, the sensation of High Noon, as Nita, whose blood mingled the PASSION of Spain and the DEATH LUST of the Apache.”

All in all this is a nasty little movie that is best avoided. I've given it two revolvers for Wilke, Keith and Jurado but as a movie it really only deserves one.