Butch and Sundance ride (yet) again

The story of Robert Parker and Harry Longabaugh (known to most as Butch Cassidy and the Sundance Kid) exercised a fascination on Americans, indeed the world, even when they were still alive (and no one knows for certain where, when or how they died) and received an enormous boost with the  hugely popular 1969 movie Butch Cassidy and the Sundance Kid. Still today the characters remain among the most famous of all in what people love to call the Wild West.


As far back as 1933 Butch appeared in an early talkie B-movie, Deadwood Pass, played by Slim Whitaker, and thereafter he has been a regular of Hollywood Westerns. Well known character actors such as John Doucette, Neville Brand, Charles Bronson and Arthur Hunnicutt all played Butch before Paul Newman ever did, and since the enormous success of the Newman/Redford extravaganza, the Butch & Sundance bandwagon has kept rolling along. There was the 1973 TV series, there was the big-screen Butch and Sundance: The Early Days (1979) and in 2011 the rather good Blackthorn, a sort of Butch & Sundance last days. Before Blackthorn, though, came yet another TV outing, The Legend of Butch and Sundance.


We first meet Butch (David Clayton Rogers) as Parker and are told that his father was a preacher (in fact he was a Mormon elder in Utah). This upbringing has given the boy a strict, if curious sense of morality. Caught for horse theft and imprisoned, he comes up for parole. The judge is minded to release the young fellow on a promise of good behavior but the prisoner can’t swear not ever to break the law again, for fear of lying. They come to an agreement: Parker agrees never to break the law in Wyoming again. Good enough, says the judge, and off goes Parker, meeting up with his mentor Mike Cassidy (Michael Biehn), to depredate in Colorado and Utah. 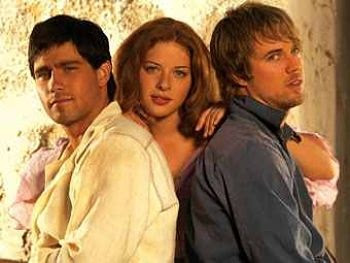 Butch, Etta and Sundance, class of '06
Now we meet Etta Place (Rachelle Lefevre), a photographer, and two-gun Harry from Sundance (Ryan Browning). They clearly have a ‘thing’ going. Etta hesitates at the wildness of the young fellow but at the same time is attracted by it. But she can’t commit herself until her elder sister, who is rather plain (Michelle Harrison), has found a man.


Mr. Rogers, Ms. Lefevre and Mr. Browning are extraordinarily good looking in a 2000s Californian sort of way. Central casting has tried for a younger but recognizably Newman/Redford look for the protagonists, though not too Katharine Ross for Etta. I didn’t know any of these actors and in the case of all three this was their first and to-date only Western. 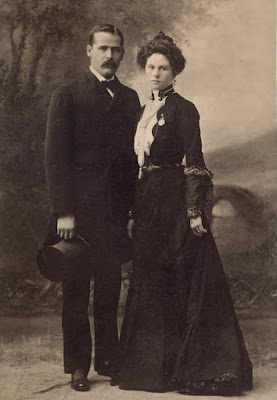 The real Longabaugh and Place
The villain of the piece is Durango (whom Etta politely calls Mr. Durango), played by Blake Gibbons. By comparison, Mr. Gibbons is a hardened veteran of the genre, having been in an episode of both Guns of Paradise and Dr. Quinn, Medicine Woman, the straight-to-video Prairie Fever and the Michael Landon Jr.-written and directed Love’s Abiding Joy. In The Legend… he is a gang member who has sold out to the law. The best thing is the way he has a clay pipe tucked into one of the bullet slots on his bandolier and matches in his hatband.


Well, Mike Cassidy is murdered by Durango (in reality the best guess is that Cassidy fled to South America) and Parker takes over both command of the Wild Bunch and his mentor’s name, being known hereafter as Butch Cassidy. He has a sort of friendly rivalry with the Sundance Kid, as the gang call Harry, both in marksmanship (in truth Cassidy was no gunman and as far as is known never shot anyone) and for the affections of Etta. The triangular relationship is in fact quite subtly handled. There does indeed seem to have been a three-way affair: Etta probably did divide her affections between the two, even if she was more ‘officially’ the consort of Mr. Sundance. 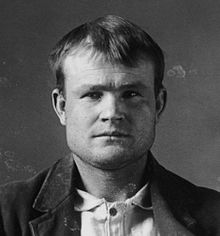 Butch: not quite such a pretty face
One of the train robberies is shot in a chiaroscuro way which reminded me of The Assassination of Jesse James by the Coward Robert Ford of the year after. I wonder if Assassination director Andrew Dominik and DP Roger Deakins had seen this on TV before doing theirs? Probably not, and anyway, the Dominik/Deakins version is ten times better. Still, the Iglor Medlic cinematography on The Legend of Butch and Sundance is quite nice in parts (his only Western) and some of the Calgary, Alberta locations very attractive. Visually, this TV movie is not at all bad.


There’s the standard and pretty well obligatory nod to ‘the end of the West’. Well, it is the 1890s after all. Butch says things like, “The frontier’s almost gone. Cities springing up like weeds.” Butch and Sundance are shown as recalcitrants, hold-outs for the old way of life, and of course, as always in these movies, the railroad companies are evil, even worse than the banks. Hell, Mike Cassidy says at one point, the railroads own the banks. This gives a spurious moral justification for robbing trains.


The boys fake their deaths and go off to Mexico where they go semi-straight but the evil nemesis Durango sniffs them out and comes south of the border after them. Things build to the inevitable Butch/Durango showdown, but this fizzles rather as it takes place back in Wyoming and Butch can’t do anything naughty there. Remember his promise to the judge?


The Legend of Butch and Sundance is harmless, a bit on the bland side, but a fair bit of fun here and there and probably worth a look if it comes on TV. The main actors certainly don’t have the spark that Newman and Redford had, and the writing (John Fasano, an associate producer of Tombstone) doesn’t give them quite enough quips or repartee but, though, at the risk of damning it with faint praise, for a TV movie it’s OK. It certainly won’t be the last time Sundance and Butch appear on the screen, that’s for sure. 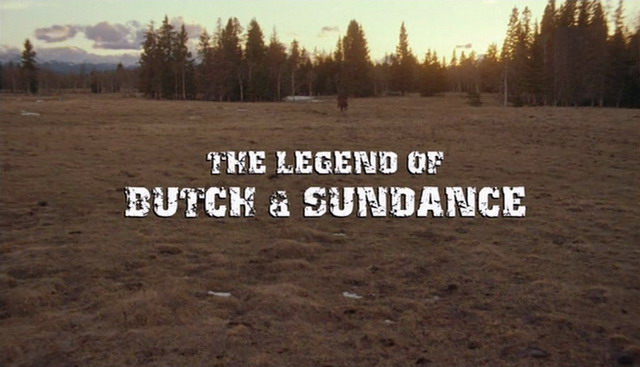