If you asked people to name a cattle baron of the West, many would say John Chisum. This may be because of John Wayne or because of Chisum’s part in the story of Billy the Kid. But even without these, his story would be an interesting one. 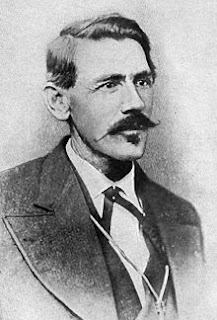 
Many details of his early life are still unknown but he was born in Tennessee in 1824, the second of five children. His family moved to East Texas when he was thirteen. As a young man he worked as a building contractor and he also ran twice for the office of county clerk in Lamar County, and won the second time. He went into the cattle business in 1854, in partnership with an eastern financier, Stephen Fowler. They grazed stock in the Fort Worth area, and prospered, until the Civil War.


During the war he was a supplier of beef for the Confederacy. 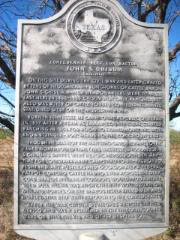 Cattle for the Confederacy
It's far from legible in the photo but part of the text on this plaque in Texas reads:


On this site during the Civil War and later, grazed by tens of thousands the Longhorns of cattle baron John S. Chisum. Ranch headquarters were 10 miles east. Here in 1863-1865, Chisum not only ranched but also was buyer of cattle to feed Confederate armies stationed west of the Mississippi River.


The period following the collapse of the Confederacy was one of rock-bottom beef prices, Indian raids, drought and lack of hands. Chisum, now in his forties, turned his face West.


With his brother Pitzer, John Chisum moved into the land along the Pecos River and made his headquarters thirty-odd miles downriver from Fort Sumner, at Bosque Grande. He sold beef to the Indian reservations, to local ranchers and to Army posts. He bought no land but he controlled the water and gradually the open range along the river became accepted as his. This grew and grew and at its greatest extent was bigger than some eastern states and covered up to a fifth of New Mexico territory. He ran up to a hundred thousand head. He had a small army of cowhands and his long rail brand and ‘jinglebob’ ear-notching were known all over the Southwest.


He worked with other well-known cattlemen, Charles Goodnight and Oliver Loving, putting together herds and driving them north. 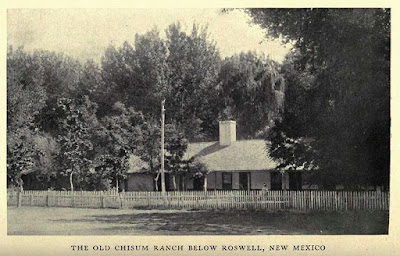 The Chisum ranch near Roswell
In 1875 he moved his base to near Roswell. He built the Square House round a courtyard and later the more substantial Long House. The dining room sat 26 to dinner. Here came the great and the good of New Mexico, and sometimes the not-so-good too. He never married but his niece Sallie (1858 – 1934) often acted as hostess. Obviously she had to be pretty and have a romance with Billy the Kid in the movie. 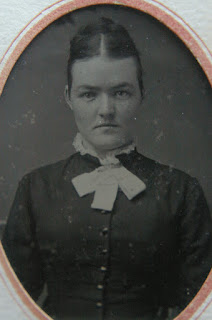 
Chisum himself seems to have lived a simple and unluxurious life. His skin baked brown on the range and he wore scuffy boots with patched pants tucked in them. His face was thin with a long jaw and prominent nose. His hair was dark brown and he had a bushy mustache. He was not an unhandsome man. Despite the statue erected to him later, he did not carry a gun, usually rode a mule and was only indifferently good with a rope. He left that kind of thing to his cowboys. 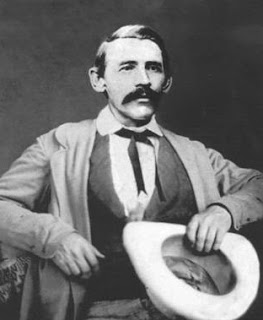 Chisum
He was no Wayne-ish gunman. He was said to tolerate small-scale rustling but be tough on larger scale theft. Once with his range boss Jim Highsaw he rode into El Paso and found good numbers of his beef ready to be slaughtered. It appeared that rancher Dick Smith was the guilty party and Highsaw shot him.


Although in fiction Chisum played a leading part in the Lincoln County War, in reality he stayed out of it as much as possible, often being away in the East. He sympathized with the Tunstall-McSween faction but did little to aid them. Billy the Kid claimed that Chisum had hired him and demanded $500 payment, but the cattleman heatedly denied it and refused. Billy said he would steal $500 worth of Chisum cattle. It was now that Chisum wrote to Governor Lew Wallace and urged him to appoint Pat Garrett as county sheriff to put a stop to the rustling of Billy and a growing number of others. 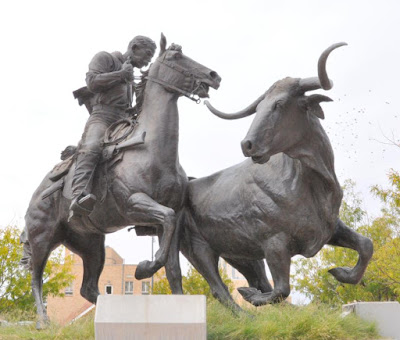 Statue of Chisum on a horse, with a gun, roping. Yes, well...
Chisum was not a skilled politician and up in the Territorial capital the corrupt Santa Fe Ring hated him for his power, his independence and his backing of the ‘wrong’ side in the county war. Trumped-up lawsuits charged him with fraud and he was actually imprisoned in Las Vegas. In jail he wrote a full vindication of his actions and this document survives. In it Chisum comes across as a straightforward if over-trusting man.


After his release he sold most of his stock to a big St Louis firm, Hunter & Evans. It was in fact a shrewd commercial decision: the days of big open-range ranching were on the wane.


In 1883 a tumor appeared on his jaw which grew to the size of a baseball. In agony he went to Kansas City where surgeons removed it and pronounced him cured but on the way back, at Las Vegas, it reappeared with extraordinary rapidity. He returned to Kansas City but it was now too late. They gave him palliative care but it hardly helped. In desperation he went to take the waters at the mineral baths of Eureka Springs, Arkansas but he died there in December 1884, aged sixty. 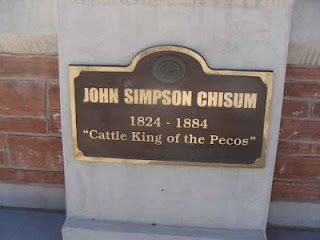 Las Vegas memorial
Some say that he lived with a slave girl in Texas in the 1860s and had two daughters by her but there seems no hard evidence of this.


John Chisum appeared as a character a few times on the big-screen and TV. In 1953 Roy Roberts played him (just a cameo, but it's a good little performance) in the Rod Cameron B-Western San Antone.  In 1957 poor old Hank Worden was 'Marshal John Chisum' in the trashy Forty Guns, but this Chisum bears no relation to the real one. Forty Guns star Barry Sullivan was rancher Chisum in Peckinpah’s Pat Garrett & Billy the Kid and that film’s Garrett, James Coburn, played Chisum in Young Guns II. Of course the most famous screen Chisum was John Wayne, playing the cattleman as a swashbuckling gunman, in the movie of the same name in 1970. In it he single-handedly wins the Lincoln County War. 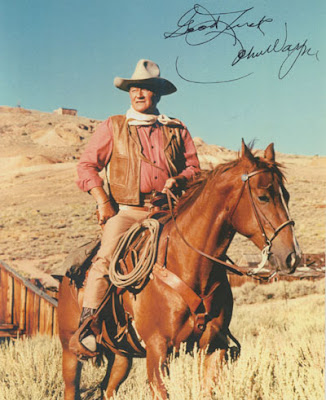 Duke as Chisum
As for books, there was a sensational novelization of the John Wayne movie by ‘Sam Bowie’, Chisum, in 1970. 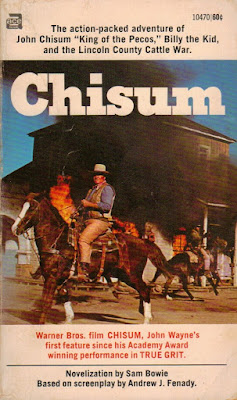 Novelization
More factually, in 1984 Mary Whatley Clarke wrote John Simpson Chisum: Jinglebob King of the Pecos. Then there was quite a pause. John Simpson Chisum: The Cattle King of the Pecos Revisited by Clifford R Caldwell was published in 2010. In 2012 appeared Cowjohn Chisum: His Life: A Big Pinhook in the Road by Skipper Steely, in the ‘Mini-History Series’. Mr. Steely says that there was a “fine Columbia University Master’s essay by Harwood Hinton” on Chisum but there seem to be few substantial or serious biographies. Curiously, Mari Sandoz hardly mentions him in her 1942 book The Cattlemen. There’s a chapter on him in Leon Metz’s 1976 book The Shooters, though why a man who never carried a gun is there it is hard to say.