Such was the enormity of the box-office hit Butch Cassidy and the Sundance Kid in 1969, sequels and prequels were inevitable. The big Newman/Redford picture was, as a Western, pretty poor, and the totally dire Raindrops are Falling on Your Head sequence in particular pretty well sank it deeper than the Titanic. But it was quite humorous, reasonably charming and hugely popular. Its stars were winning and handsome and the banter between them drôle and witty. People who never went to Westerns went to this one. On a $6m budget it grossed well over $100m then, and it is still earning.


Prequels and sequels had their problems, though, sequels especially, given the ending. As the last freeze frame didn’t actually show the boys shot to death I suppose they could have escaped the massed rifles of the Bolivian army but we were definitely left to think they perished in a hail of bullets. A prequel, then. But prequels could suffer from another problem, which Roger Ebert highlighted in his review, namely that the Newman/Redford vehicle “made an inexorable progress toward its end, toward the hail of bullets that would sooner or later find Butch and the Kid. In their deaths, they cast a poignant light on the events that went before. The inescapable problem of Butch and Sundance: The Early Days is that it ends so long before the emotional conclusion of the story that it's just two lives in midstream.” Yes, that’s right. It’s all too light and inconsequential. If the two characters hadn’t been called Butch and Sundance you would wonder why on earth the movie was being made.


Having said that, the film is proficiently made and nicely photographed (by László Kovács in New Mexico and Colorado) and the principal actors (Tom Berenger and William Katt) are engaging and do indeed look in certain lights like a younger Newman and Redford. Director Richard Lester was more than competent, especially at lighter fare (A Hard Day’s Night, The Three Musketeers, Superman II) and if he was no Western expert (this was his only outing in the genre), that hadn’t stopped George Roy Hill, for the 1969 movie was his only Western too. That shows if you are a Western buff, and these two movies are best viewed as buddy comedies which happen to be set in the West rather than true Westerns.

Sundance and Butch
The story starts, as does a later TV movie which covers the same ground, The Legend of Butch and Sundance, with Robert Leroy Parker unable to promise not to break the law in order to gain parole for fear of lying but proposing a deal whereby he won’t break laws in Wyoming, only elsewhere. This time he is backed up by Jeff Corey as crusty old lawman Ray Bledsoe, who likes the boy and trusts his word. Corey is one of the better things about the movie. Of course he had played the same part in the 1969 movie, so it’s a bit odd that he looks ten years older than that yet this one is set ten years before. Oh well. 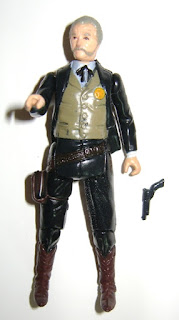 You can even buy a miniature Jeff Corey
Soon Parker (who already calls himself Cassidy after a boyhood hero) meets up with Harry Longabaugh who is trying to rob a casino and ‘borrows’ Cassidy’s gun to make his escape. Butch joins the pursuing posse in order to find Longabaugh and team up with him. Thus the two begin their career of harmless fun, robbing and looting over various states (though not Wyoming).


The posse is led by Joe Le Fors (Peter Weller) in a straw boater. He is the ruthless lawman determined to bring Longabaugh to justice and not at all understanding like good old Jeff Corey. Joe Lefors (1865 – 1940) was of course a historical lawman, best known for his arrest of Tom Horn for the murder of Willie Nickell. He did in fact play a minor role in the 1887 recovery of a herd of cattle rustled by the Hole in the Wall Gang and in 1899 he took part in a posse to capture Butch Cassidy and those responsible for what would become known as the Wilcox Train Robbery. He didn’t lead the hunt for Butch and Sundance, though, and some contemporaries (such as Charlie Siringo) thought him a mountebank but in this movie anyway Lefors (or Le Fors) is the boys’ lurking nemesis. 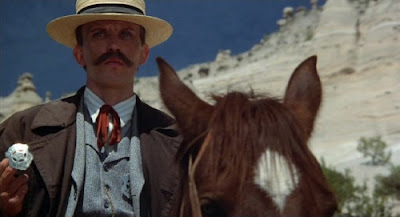 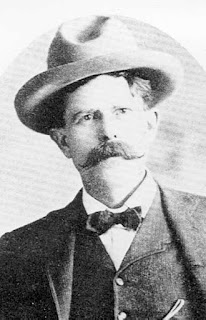 Joe Lefors as Joe Lefors
The boys have two nemeses in fact, because badman OC Hanks (Brian Dennehy, another plus point for the movie) is convinced that Butch betrayed him to the law and he wants revenge. Luckily for Butch, he shoots Sundance by mistake, which annnoys Sundance and there’s a showdown gunfight.


There are a few entertaining moments, such as when Sundance is asked to knock a woman out. Luckily there’s no bicycle and that interlude was replaced with the lads learning to ski, with, thank heavens, no song. The railroads are evil, of course, as they (nearly) always are in Westerns. Butch angrily remarks that the railroad companies have children working for them. 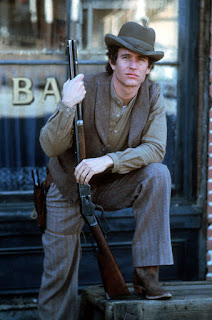 Butch
Butch is married, to Mary (Jill Eikenberry), and has two young sons, but is obliged to abandon them when on the run. He robs one bank to pay for a sharp lawyer to get his mentor Mike Cassidy acquitted. 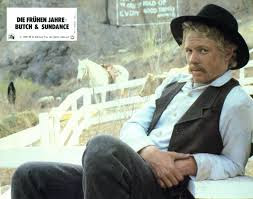 Sundance
Innocuous, quite pleasant, but in the last resort eminently missable, this movie can be watched without cringing or falling asleep but would not appear in anybody’s top hundred Westerns.