Before his death in 2012 Ernest Borgnine acted in a number of made-for-TV Westerns and in them he became a lovable old man, often a rancher, grandfather or both. Aces ‘N’ Eights was his penultimate outing in the genre. The link between the title – referring to the famous ‘dead man’s hand’ held by Wild Bill Hickok on his last day – and the content of this movie is tenuous, to say the least. In fact there’s no link at all beyond one character ploddingly explaining about Wild Bill. 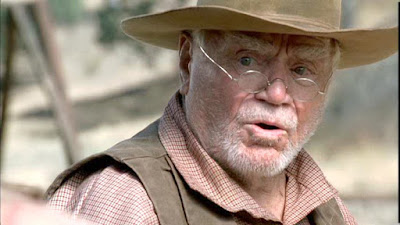 Ernest doing his loveable old man act
The only slightly unusual thing about the film is the level of violence, quite elevated for TV. It’s the old plot about a ruthless (but unnamed) railroad company hiring vicious gunmen to drive settlers off their land so the tracks can come through, and the thugs are indeed a bit on the ruthless side. Ernest, bless him, is one of the settlers and of course he won’t sell. He has a big shotgun to back up his argument, though curiously whenever he prepares to use it, the sound dubbers (the real villains of modern Westerns) preface his action with the noise of a Winchester round being levered into the breech. 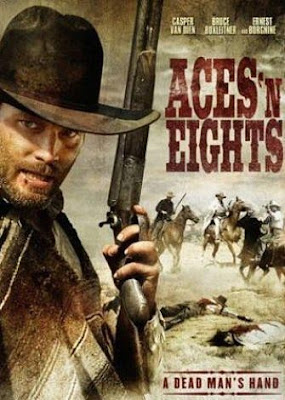 The gunmen wear long dusters so they are obviously bad.


The hero is a certain Luke Rivers, who used to know one of the bad guys in the old days but has now hung up his guns, you know how they do. Naturally he will strap the irons on again and have a showdown; that’s an essential ingredient of this plot. He also dons, for the final shoot-out, a Clint Eastwood poncho, and unshaven and with a stubby cigar, he does look quite Clintish. Rivers is played by Casper Van Dien from Starship Troopers, who, as far as Westerns go, has only done this and two episodes of Dr. Quinn, Medicine Woman, so can hardly be accounted a specialist. He’s OK, I guess.

Going for the Clint look
The gang's redneck bad guy, the one our hero used to know, is named DC Cracker and is played by Bruce Boxleitner from Disney’s TRON. Mr. Boxleitner had started in Westerns in an episode of Gunsmoke in its final year (1975) and had then starred alongside James Arness again in the TV How The West Was Won. After that he made quite a thing of TV Westerns. He was Wyatt Earp in the TV I Married Wyatt Earp in 1983. In this one, he moves over from the dark side to the defenders of decency, because the real bad guy is too bad even for him, shooting down women and children and so forth, which is really rather naughty. This is the evil Tate (Jeff Kober, who has credentials as he was born and brought up on a ranch near Billings, Montana). 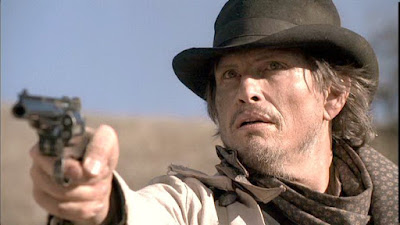 Bad guy Jeff Kober
A slightly unusual twist is that the bespectacled Eastern dude from the railroad company, Riley, is actually quite a decent fellow and tries to keep the murderous posse in check. Riley is played by the quite splendidly named Jack Noseworthy. 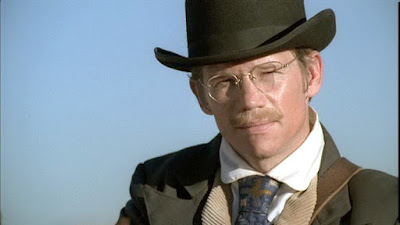 Railroad man with a conscience. Good lord, whatever next.
There’s also the standard loyal ranch hand (Rodney Scott) and impressionable young boy (Jake Thomas) and of course the woman. It’s good that women are feistier in Westerns these days but the danger is that they become tiresome nags and Deirdre Quinn as Jo Tanner falls into this trap. You wonder what on earth the hero sees in her.


It’s one of those movies which within 0.5 seconds of the first frame being shown you know is a TV one. It’s funny that, how you can instantly tell. I think it's something to do with the film stock.


Look, I have no problem with these TV Westerns. At least they are still making them and so (presumably) people still watch them. They are the modern equivalent of the 50s programmers that were churned out by Poverty Row studios. And what’s wrong with that? 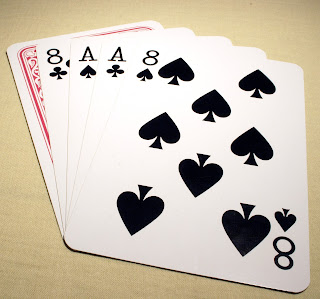