The number of Westerns Anthony Mann made (often quoted as eleven) will depend on your definition of a Western. In many ways The Tall Target is not one, being too Eastern and too early (it is a story of a how the Baltimore Plot to assassinate President-elect Lincoln was foiled in 1861) but in other ways it is a Western, as a brave loner thwarts the bad guys with guns. At the very least, the film represented that middle ground between noirs and Westerns which Mann crossed right at the start of the 1950s. And it’s a damn good movie. 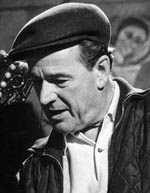 Anthony Mann, master of the noir - and the Western
The film has an almost Agatha Christie-ish murder-on-a-train vibe to it and also has more than an echo of The Lady Vanishes: the writing on the steamed-up window, the sinister woman with an invalid in a locked compartment, and other grace notes. It is beautifully shot in black & white (by MGM’s Paul Vogel, not a Western specialist though he did a few, including the excellent later The Rounders) and this adds to the noirish tint. It is very well directed by Mann, being tense, taut and actionful, with thought-provoking dialogue and quite subtle characterization. The treatment of slavery is especially sensitively handled: the institution is damned not by the ranting diatribe of any character (in fact the anti-slavery Northern lady who prattles on about it is shown as a fool) but by the understated and dignified portrayal of the slave character Rachel (Ruby Dee, an excellent performance). 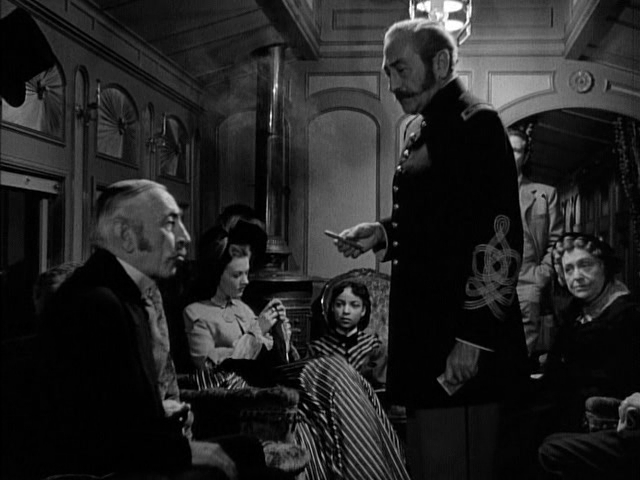 Passengers on the sinister train: anti-Abe Will Wright sits left. Far right is a character supposed to be Harriet Beecher Stowe (kinda) and in the center is the slave girl Rachel, very well played by Ruby Dee. Sadly cut out of the picture to Harriet's left is Percy Helton, whose knees you see, so that's alright.
George Worthing Yates (B sci-fi expert who also worked on The Last Outpost in 1951) and Art Cohn (TV writer whose career was cut short by an air crash) wrote it, from a story by Daniel Mainwaring (as Geoffrey Homes), noted for The Last Outpost (with Yates), The Eagle and the Hawk, Bugles in the Afternoon and many TV shows. The script is intelligent and fast-paced, not too obvious and well leavened with comic relief.


Most of this comic relief comes from an utterly brilliant Will Geer as the lugubrious train conductor. He has a big part and handles it in a masterly way. 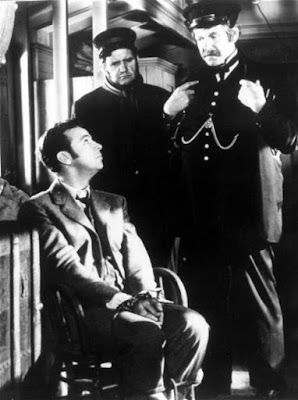 Will Geer. Worth watching the movie just for him.
But of course the star is Dick Powell. He had long ago moved on from his time on Warner musicals and graduated to tough private eye roles, at which he excelled (Murder, My Sweet came out in 1944). He had also been Marlowe on radio and to the public of 1951 he was ‘the’ hard-boiled cop. In 1948 he had shown that he could make the leap from PI to cowpoke in the excellent Station West (though that was a very noirish investigative Western) but this was pre-Zane Grey Theatre on TV so he wasn’t really seen by the movie public as a Westerner. That’s OK: as we said, The Tall Target was more of a noir tough-guy flick than a Western anyway. Powell is very good in it. As New York plain-clothes cop (just resigned) John Kennedy – a name which didn’t quite resonate in '51 as much as it soon would - he suspects a plot to assassinate the charismatic Lincoln. He is apolitical but has been fascinated by Abe and although all of his superiors believe this talk of plot to be “hogwash”, he is determined to thwart the villains and save the life of the President-elect. He does. 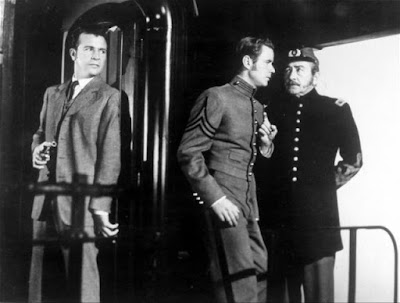 Tough plain-clothes man Dick overhears conspirators
Allan Pinkerton, in charge of Lincoln’s security, apparently believed in the plot, and he briefly appears in the last scene (James Harrison), with Abe (Leslie Kimmell) as the train chuffs past the unfinished Capitol building and he arrives in DC, safe but rather ashamed at having sneaked in.


There are some great character actors on board the train, like Percy Helton and Will Wright (two of my favorites). There’s a dodgy colonel who soon confirms our suspicions in turning out to be a rotter. He’s played by Adolphe Menjou but the part would have been perfect for Claude Rains. Florence Bates plays a character clearly supposed to be Harriet Beecher Stowe researching Uncle Tom’s Cabin but named “Mrs. Charlotte Alsop”. Uncle Tom came out in 1852 and this is 1861 so I guess they couldn’t say it was the real Mrs. Stowe. Pinkerton thought that the plot originated with a certain Corsican barber, Cipriano Ferrandini, and Peter Brocco has a small part as the sinister razor-wielding ‘Fernadina’. 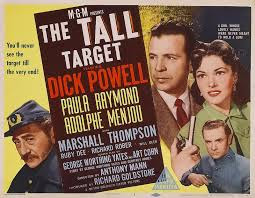 Very good
Small guns play a key part, including a proper derringer, so that sends the film up in my estimation.


There’s an upper open window in Baltimore that makes you think of Dallas.


Anthony Mann loved stories about a journey, a journey in which the central character(s) change and develop as they move through space and time. This is a good example. Probably not a Western in the true sense but a damn good film and well worth a watch. 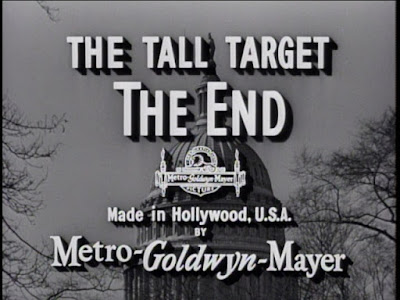