The start of the ‘Cult of the Indian’

In 1950 director Anthony Mann moved from noir thrillers to Westerns. In the coming decade he proceeded to make some of the greatest ever examples of the genre. We think in particular of Winchester ’73, The Naked Spur and The Man from Laramie, all with a new tough-guy James Stewart in the lead, but there were also other fine films such as The Tin Star with Henry Fonda or Man of the West with Gary Cooper. The first of them, however, the one that marked the transition, was Devil’s Doorway. Although Winchester ‘73 came out first, Devil’s Doorway and its companion piece The Furies (both of which, unusually for Mann, featured strong women in central parts) were made before Winchester, in the case of Devil’s Doorway in 1949. And Devil’s Doorway is magnificent. 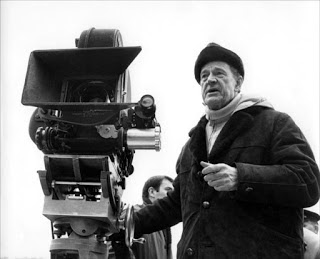 Anthony Mann
The first thing that strikes you is the look of it – as is often the case with Anthony Mann. Shot in luminous black & white by John Alton, who had photographed noirs like Raw Deal and T-Men for Mann, it features many stunning Colorado-location shots (the story is set in Wyoming but Colorado does just fine) set against stark mountains and hard terrain. There are also many noirish interiors and night scenes, and silhouettes. Visually, the film is superb – and classic Anthony Mann.


The next biggest impact, I think, is Robert Taylor. I always thought Taylor a much better Western hero than many gave him credit for. Sadly, he rarely got parts in movies good enough for his talents and some of them were downright poor but when he did get a good one, as in this case, he was strong, convincing, tough and pretty damn good. Taylor rode well and loved the West in all its ways. Here he plays a Shoshone Indian, Broken Lance (a name heavy with Western significance) who returns from the Civil War to Medicine Bow (another significant reference, The Virginian’s town) with a Congressional Medal of Honor pinned to his Army coat. Straight away he encounters racial prejudice and outright hatred on account of his blood, notably from seriously unpleasant rabble-rousing lawyer Verne Coolan (a superb Louis Calhern, with, naturally, a sneaky derringer) and his loutish thug-henchman Ike (an excellent James Millican). 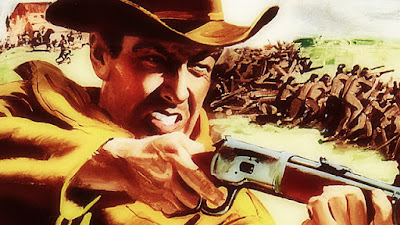 Robert Taylor - fine Western actor
Other acting is also very good. When Lance discovers that despite his service to his country at Antietam and Gettysburg he is not officially a US citizen and thus has no right to hold his land (and Coolan encourages homesteaders and sheepmen to take it over) he turns to a lawyer, and is rather shocked to find that “A. Masters, Attorney” is a woman (Paula Raymond, who once turned down the part of Miss Kitty in Gunsmoke, whose third Western this was and who subsequently did a great number of Western TV shows). Atty. Masters has herself suffered discrimination and the two bond. Raymond plays the lawyer as a demure lady but it comes across very well and she has grit beneath that crinoline. 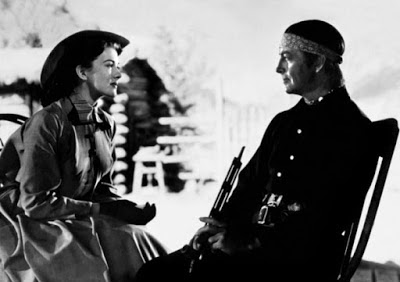 They bond
And the old marshal, who likes Lance, is the great Edgar Buchanan, in one of his most sympathetic parts. The acting is really very good. 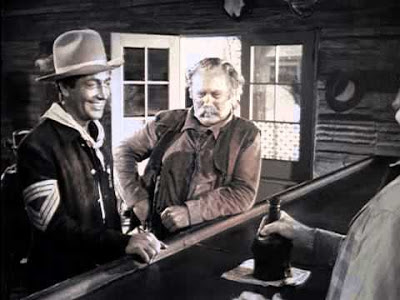 Not everyone is a racist. Edgar Buchanan as sympathetic marshal.
So, the cinematography and cast are first class. But so is the writing. Guy Trosper hadn’t really written anything significant before, and certainly not for Mann. He had no Westerns to his credit (though would later work on The Americano and One-Eyed Jacks) and yet he came up with a sensitive, moving and powerful script that delineated and developed characters, brought tension and provoked thought.


The Second World War had an impact on popular culture in the US in the sense that we were all told how repressive and racist the Fascist powers were, and how tolerant America was by comparison. GIs served alongside ‘minorities’ and found to their surprise that they were just like them. Hollywood began to consider making movies which reflected this. Anti-semitism was the first target, with Fox’s Elia Kazan-directed Gentlemen’s Agreement with Gregory Peck in 1947, then Kazan did another anti-racist picture for Fox, this time about discrimination against black people, Pinky (1949). It was inevitable that Westerns would ‘borrow’ the cachet, and anti-Indian feeling was after all a mainstay of the genre. As anti-Communist hysteria grew – and it was especially virulent in Hollywood – some liberals graduated to Westerns because those movies contained a presumption of patriotism and they were set ‘safely’ in the past. Contemporary racism could be treated with near impunity, they thought – though of course as it turned out it didn’t stop movie people being blacklisted and hounded out of their livelihoods in witch-hunts. 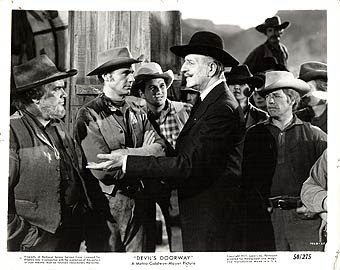 Louis Calhern splendidly villainous and slimy
In Devil’s Doorway, the racism is underlined by making Lance quite “white”. When first seen, he’s just Robert Taylor with a tan, in white man’s clothes and short hair, and he runs cattle just like any local rancher. His house is a classic ranch (actually, probably a bit too idyllic but I suppose Mann was making a point) and Lance seems to assume that he can live his life unmolested as a local cattleman. Of course, a story like this would have resonated in 1949 and ’50 because so many members of the armed forces from various ethnic minorities came back from the war and assumed that as they had been accepted as equals on the front, so too now they would be back home. It was far from always the case. As the film progresses, however, and Lance encounters more and more racial discrimination, even facing annihilation, he rediscovers his Shoshone identity. His clothes become more Indian and his hair longer, and he esteems Shoshone customs (such as the rite of passage of a young boy). Only at the very end does he put back on his ‘white man’s’ Army jacket, and that is to make an ironic point.


The importance of land is stressed. “I was raised in this valley,” Lance says. “If we lose it now we [Indians] might as well all be dead.” This is particularly so of “the red man”, as he is called here, but of course it is a central theme to so many Westerns. Curiously, though, Mann plays with the standard ‘cattle rancher vs. sheepherder’ theme by making the rancher the good man and the sheepmen interlopers in the control of the villain, who want to take away the rancher’s livelihood.


Well, there is a battle, with much use of dynamite. Ike is killed and that’s OK - good riddance, in fact – but Marshal Buchanan’s corpse is also seen – oh no! – and now slimy Coolan gets himself appointed marshal by the Governor and he stirs up the mob to an anti-Indian bloodlust. We so want Coolan to be struck down. The ending is noble and tragic, and as in The Furies, there is here an element of Greek tragedy as fate brings down a family of warriors (in this case the Shoshone). 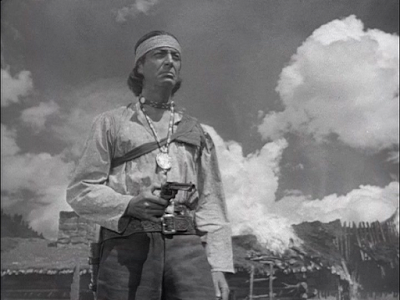 Tragic
Devil’s Doorway was not a critical or a box-office success and suffered by comparison to Fox's more mainstream and ‘softer’ Delmer Daves-directed Broken Arrow of the same year. It was even considered by some a rip off of that movie, quite wrongly (it was made before it; MGM delayed the release till it could be sure that pro-Indian movies would sell). Mann himself said, “I think the result was more powerful than Broken Arrow, more dramatic too.” I agree. Broken Arrow was a fine film and a seminal one in many ways but when you think of Debra Paget’s sugar-sweet Indian and Jeff Chandler’s white man’s idea of the noble savage, you actually see Devil’s Doorway as a superior film.


Both pictures contain an inter-racial romance. While this raises few eyebrows these days, in 1950 it would have been termed miscegenation, and would have been viewed with shock or even abhorrence by many. But Broken Arrow’s example is ’safe’: the Indian maid is beautiful, she is subservient to the white male (always wanting to learn his ways and become ’civilized’), and anyway she is soon killed. However, in Devil’s Doorway, the affair is between an Indian man and a white female, and in those days the man was still considered the dominant partner in a marriage. This ‘redskin’ would be ‘taking’ a white woman, and that certainly would have been viewed with disapproval by many in the audience. It is another example of how Mann’s film is more radical and daring than Daves’s. 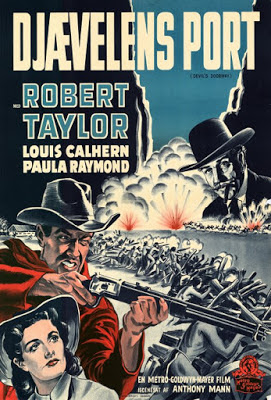 Nice poster
Still, both pictures had a huge influence on the genre. While ‘standard’ Westerns in which whites shot down nameless dangerous ‘savages’ did continue, a new strand of more pro-Indian, or at least more evenly-balanced films emerged. In some ways, John Ford started it in 1948 when he made the Apaches under a wise Cochise a worthy foe in Fort Apache, and Jeff Chandler’s statesmanlike Cochise in Broken Arrow built on that. Chandler himself returned a couple of times as Cochise in later movies, and other Indian chiefs were shown as sage and reasonable rulers, holding back the firebrand members of their tribe who wished to take the warpath. Later still, in the revisionist Vietnam-dominated early 70s, in films such as Soldier Blue or Little Big Man, for example, Indians became the out-and-out goodies and the US Cavalry were murderous villains. 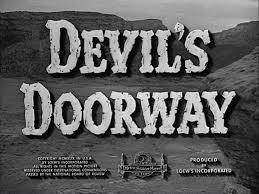 Fine film
We should remember, though, that Devil’s Doorway and similar films did not invent a pro-Indian stance. In the early days of Westerns there had been many films which highlighted the plight of the Native American at the hands of the encroaching white man. In the 1910s Thomas Ince, in particular, produced several pro-Indian silent movies. Well-known feature films such as Ramona, The Squaw Man and Zane Grey’s Vanishing American were made and remade all through the silent era. But Devil’s Doorway and its ilk were a worthy 1950s corrective to the Indians of the Stagecoach kind, who were just whooping savages to be shot down by the brave white men.


In any case, Devil’s Doorway is a fine movie, a wonderful start to Anthony Mann’s Western career and still an excellent watch today.