In 1959 Audie Murphy signed up for a Walter Mirisch production released by United Artists, Cast a Long Shadow. It wasn’t a patch on the relatively glossy and (again, relatively) big-budget Westerns he was doing for Universal, of which he had now appeared in 14. Cast a Long Shadow came between Ride a Crooked Trail and No Name on the Bullet, among Audie’s best, and of course the following year he would be outstanding in The Unforgiven. So Cast a Long Shadow paled by comparison. It was in black & white, for one thing, which by 1959 wasn’t really on. Amazing that Mirisch produced this and then only the next year a big, brash, colorful picture like The Magnificent Seven. 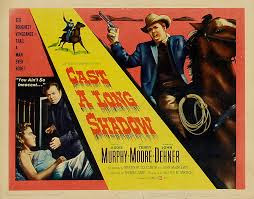 
Cast a Long Shadow had structural weaknesses too: it can’t make up its mind whether to be a story about a prodigal son taking over dead daddy’s ranch or a cattle-drive picture, and it tries to do both.


Still, it had James Best as the bad guy, the Reverend Denver Pyle preachin’, and, above all, John Dehner, who was never less than excellent, as the eminence grise.


Audie is cast as Matt Brown, which is odd because he keeps on, as do other characters, about his having no name. Was he a foundling? I think we should be told. He is first seen in a cantina, wearing a sweaty hat, unshaven, drunk, playing cards (badly), and then getting into a fight. This is not the Audie we know and love. But Chip Donohue (Dehner) rescues him with ease (and his gun) and takes him from the saloon back to Lobo, New Mexico where he is to inherit the ranch, 87,000 acres. 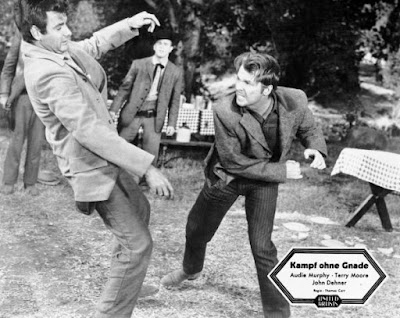 James Best and Audie slug it out
It’s actually shot in California but they do a good job trying to get a Mexican-American feel to the sets. The DP was Wilfred Cline, so that’s good. The scenes of the cattle drive are particularly effective, almost Red Riveresque, a sort of red rivulet, but I wish there had been more location shooting.


Well, bum Audie arrives back, meets up again with saloon gal Hortensia (Rita Lynn) - sounds like they had a fling - and his ex-girlfriend Janet (Terry Moore), who still loves him even though her loutish brothers (Mason Alan Dinehart, Joe Patridge) disapprove. Audie hates the place, and indeed the inhabitants do seem a poor lot, and he decides to sell out to a large collective of townsfolk. But then he changes his mind. The why of this is not satisfactorily explained. 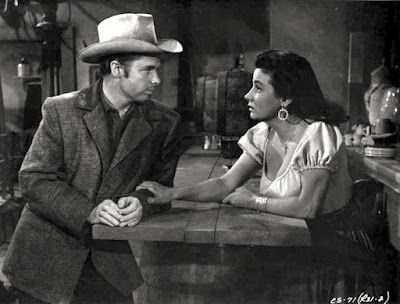 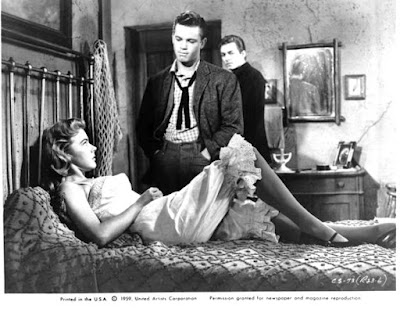 Fiancée Janet with loutish brothers (they disapprove of Audie)
Dehner discovers that the ranch is heavily indebted and unless a large loan is repaid by next Saturday, the bank will foreclose and everyone will lose everything. The only way to save the place is to get the cattle herd to Santa Fe and sell it, and repay the loan. For some odd reason, also not explained, all the townsmen agree to work as trail hands for a newly grim and determined cattle-baron Audie. 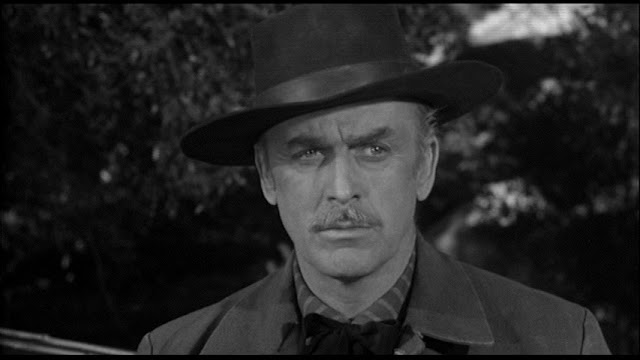 Dehner: outstanding, as always
You see, the writing isn’t very good. The screenplay was by Martin Goldsmith (who the same year worked on The Gunfight at Dodge City for Joel McCrea, a much better script) and TV Western writer John McGreevey, from a book by popular Western novelist Wayne D Overholser.


There’s a bit at the end that Darth Vader probably studied to get his announcement to Luke portentous enough.


You can tell James Best is a baddy because he tries playing footsie with Janet in church.


Audie has a last-reel – last minute, actually – conversion to nice guy, also unexplained. The whole thing verged, I fear, on the preposterous.


Still, we all like an Audie Western, and Dehner is grand, and it’s always fun to see Denver (he was a preacher in another Audie oater, Ride Clear of Diablo, remember? He must have liked the collar). There’s some shootin’ as the bad guys try to stampede the herd. You know, it could have been worse.


It was directed by Thomas Carr, who specialized in B-Westerns for Poverty Row studios and whom Mirisch probably got cheap. Carr had been an uncredited rail worker on The Iron Horse in 1924, but then who hadn’t? He’d first directed a Western in 1945, a Sunset Carson Z-movie, and went on in a similar vein for years. He was still directing TV Western shows in the late 60s.


Two revolvers, pards, and no need for a DVD purchase, but watch it if it comes on TV.