Tumbleweed, though not a Western to rival some of the great productions of 1953 such as Shane, Hondo or The Naked Spur, was nevertheless definitely one of the better Audie oaters.


It was directed by Nathan Juran, his second of three with Murphy. Mr. Juran had won an Oscar for art direction on John Ford’s How Green Was My Valley in 1941 and was later to become famous for directing the epic Attack of the 50 Foot Woman but he was involved in one way or another with many Westerns. He did the art direction on Belle Starr in ’41 and also worked on the James Stewart/AnthonyMann Westerns Winchester ’73 and Bend of the River. The first oater he directed was the Ronald Reagan version of Law and Order, in 1953, and Tumbleweed the same year was his second. Later, he directed My Friend Flicka episodes. The pace and action of Tumbleweed are more than satisfactory and Juran was a more than adequate helmsman of oaters. 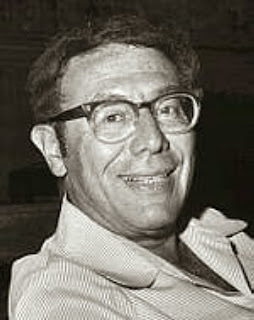 Nathan Juran
Like the vast majority of these universal Audie pictures, Tumbleweed is a B-movie (depending on your definition) but is no ultra-low-budget affair. It is attractively shot in Technicolor in Red Rock Canyon and Vasquez Rocks locations with Russell Metty (The Misfits, The Man from the Alamo, Man Without a Star, et al) at the camera. There’s also Henry Mancini music. 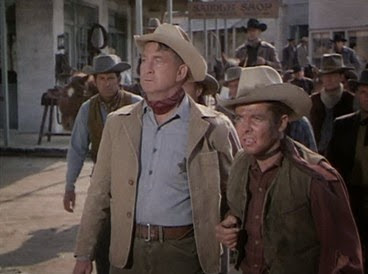 Sheriff Chill with Audie
The entertaining Chill Wills is third-billed and plays the stern but sympathetic Sheriff Murchoree. Lee Van Cleef is a lesser bad guy, Marv, and Harry Harvey has a cameo as a prospector. Some of the rest of the cast is a bit on the ho-hum side but never mind. Lori Nelson from Bend of the River plays the rather perfunctory love interest Laura. Russell Johnson (the professor from Gilligan’s Island) is the evil Lam Blanden (who shoots Lee, the swine). Johnson was a regular of TV Western shows but also took small parts in big-screen Westerns from Rancho Notorious in 1952 to A Distant Trumpet in 1964. 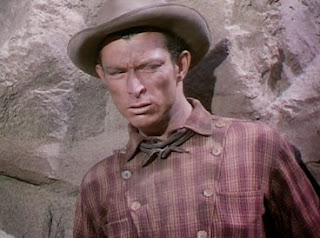 Lee is disposed of
Audie is Jim Harvey, who is hired as a guard/guide to a three-wagon train in Yaqui country. When the train is attacked and the men killed, innocent Audie gets the blame and is imprisoned. In the opening scene he has generously dug a bullet out of Tigre (Eugene Iglesias, another regular of TV Westerns), son of the Yaqui chief, the ferocious Aguila (Ralph Moody, yet another TV stalwart), so Tigre frees him from jail, murdering a deputy. Adventures follow as Jim/Audie tries to clear his name. There’s a cliff-hanging ending filmed in the rocks of Coyote Spring in which, with an appropriate “Aaagghh!”, the villain falls to his doom.


Probably the hero of the movie, however, is the eponymous Tumbleweed, a scruffy old nag who turns out to be distinctly fleet of foot. 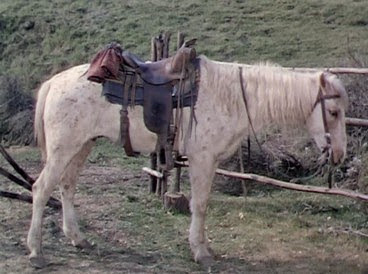 The hero
Tumbleweed was Audie’s eighth Western for Universal (of a long series of 23 from 1950 to 1966) and he had grown in confidence. He does a good job in it and was beginning to shuck off his baby-faced kid roles. He appears unshaven with far-from-pristine duds. Dyed-in-the-wool Audie fans (oh, you too?) consider it to be one of his best, and indeed Murphy himself thought it one of his better efforts.