The Undefeated came right after True Grit in the chronology of John Wayne Westerns but actually it is much more like the earlier El Dorado or The War Wagon, that is a big, commercial 60s crowd-pleaser aimed at the fans and able to fill theaters all over the world, especially in the Mid-West. Which it did. 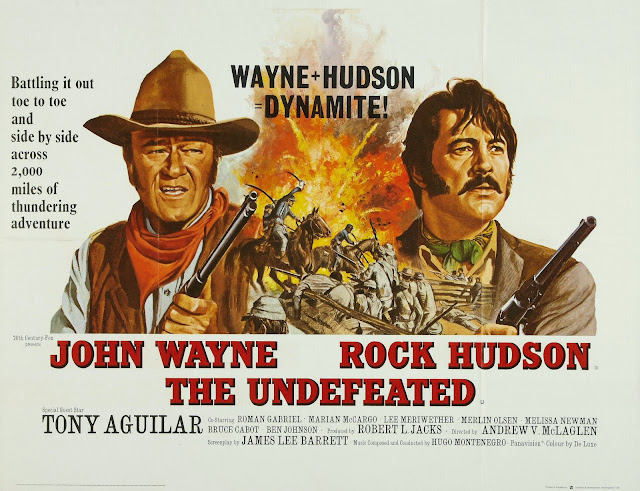 Blockbusterette
Duke got Rock Hudson to star with him. Hudson was good at Westerns, rode well and looked the part. He’d started with minor roles in Winchester ’73 in 1950 and Tomahawk in ’51, had graduated to a second-billed part after James Stewart in Bend of the River and, after Horizons West with Robert Ryan in 1952, he had led for the first time in an Western, Scarlet Angel, later that year. There followed his implausible ‘biopic’ of John Wesley Hardin, The Lawless Breed, in 1953, Gun Fury and Seminole later the same year, and he was an Indian again, Taza, in Taza, Son of Cochise in ’54. In the early 60s he had co-starred with Kirk Douglas in The Last Sunset. So he was used to ‘big’ Westerns alongside other big stars. And he carried them off. 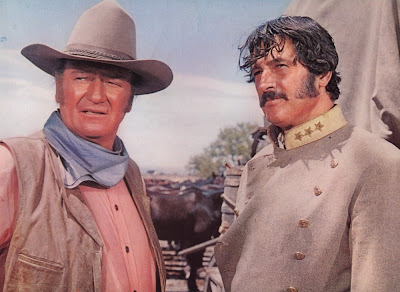 Wayne and Hudson bonding
Wayne gathered round him his usual cronies, in force. Andrew V McLaglen, who died last year, directed. In my view he was never one of the great Western directors but he certainly was able to produce a box-office hit in the genre, no doubt about that. His very first work on a Western had been on a Wayne one, when he was production assistant on the rather turgid Dakota in 1945, and his first as director had been Gun the Man Down, with James Arness (another Wayne pal) in 1956. He famously directed Arness in many episodes of Gunsmoke (Wayne had toyed with being Matt Dillon but decided not to; he did have an interest in the series, though, and introduced the first one). McLaglen also worked on other series, notably Have Gun – Will Travel, and was, really, principally a director of TV Westerns.

But he also did some big-screen ones. He helmed the rather dire but energetic Wayne vehicle McLintock! in 1963 and directed James Stewart in the so-so, rather soapy Shenandoah in ’65 and the perfectly dreadful The Rare Breed (one of the worst Westerns ever) in ’66. The Douglas/Mitchum/Widmark The Way West in 1967 was not terribly good and Bandolero! with Stewart again, and Dean Martin, wasn’t any better. In the 70s he would do the big Wayne Westerns Chisum and Cahill, US Marshal, which were about his best work, or maybe that was the Brian Garfield-written The Last Hard Men in 1976. Anyway, Duke liked him and McLaglen had the knack of handling the aging star in some big, and successful, theater-fillers. If you count all those TV shows, The Undefeated was his 255th Western! 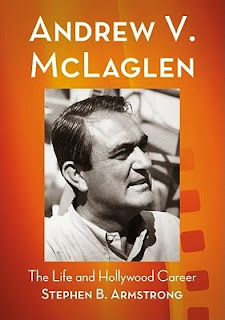 Not my favorite Western director but he brought in the $$$
William Clothier, a favorite Wayne cinematographer, was behind the camera and, as ever, did a good job of the Durango locations beloved by Wayne. It’s in Panavision with color by De Luxe and looks big and glossy. There are some lovely shots of running horses.


As for the cast, it was a case of the usual suspects. Wayne is Col. John Henry Thomas, a Union cavalry man, and in his command are Ben Johnson and Harry Carey Jr., obviously, but also in the cast are Bruce Cabot, Pedro Armendariz Jr. and Paul Fix, among others. These members of the Wayne stock company, many ex-John Ford (Ford was still alive; he died in 1973 but his last Western had been the Wayneless Cheyenne Autumn in 1964), were all stalwart Western actors, and a joy to see. When you see their names in the opening credits, you say “Oh, good.” 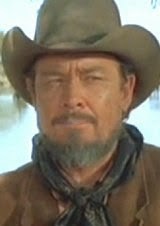 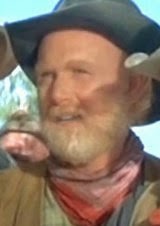 An equally bearded Dobe
The movie was written by James Lee Barrett, another Wayne/McLaglen partner, who had done Shenandoah and Bandolero! and who would later do The Cheyenne Social Club. However, the writing is one of the weaker aspects of The Undefeated. Basically, there isn’t enough plot. The movie is two hours long but you get the feeling that more should have happened.


It’s a symmetrical story of two Civil War colonels and patriarchs (Wayne and Hudson) whose lives run on parallel lines but then these lines converge. Hudson is the patrician James Langdon, Southern gentleman in a frock coat and planter’s hat who, after the defeat in 1865, prefers to burn his old house rather than let carpetbaggers have it and sets off with his whole clan (Bruce Cabot is his sergeant) for Mexico to make a new home and fight in the service of the Emperor Maximilian. First he pays off his force of Negroes by giving one of them his granddaddy’s watch, so doubtless they were very satisfied.

Wayne wins the war before conquering Mexico
As for Col. John Henry Thomas (Wayne), after winning an engagement against one-armed Confederate Major Royal Dano, as it turns out three days after Appomattox, but who knew?, he hands his resignation in to General Paul Fix and is asked by Short Grub (Ben Johnson), “Where to, John Henry?” to which the reply is “West!” They aim to round up wild horses in New Mexico and Arizona and sell them to the Army. They duly capture a large herd, allowing for some pretty photography and mucho ropin’ and ridin’ by Ben and Dobe, but the Army buyers are crooks and two of Maximilian’s agents offer him much more, so John Henry agrees to drive the steeds over the border.


Both Langdon’s and Thomas’s men cross the Rio Grande in the teeth of Yankee opposition and there, in Mexico, they meet, when Thomas warns Langdon of a gang of robbers under Pedro Armendariz who are about to attack him. Of course the two colonels bond right away and together foil the wicked bandido. 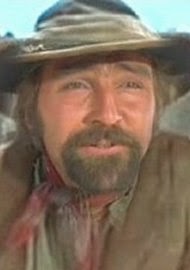 Bandido Escalante
There has to be lerve interest, also symmetrical, so Hudson’s daughter Charlotte (Melissa Newman, not Paul’s daughter but the other one, in her only Western) spurns suitor Lt. Jan-Michael Vincent (in his third of six Westerns) and instead falls for Wayne’s adopted son, the Cherokee Blue Boy (Roman Gabriel, also in his only Western). This match is daringly interracial and does not please the Southerners, though both dads seem very relaxed about the affair.


Dub Taylor is the obligatory dirty old cook and he has what he calls a mangy old cat, though the puss looked quite sleek to me. Sadly, both are casualties of the trip.


The music by Hugo Montenegro verges on the extraordinary, with one long scene played against an interminable sustained single note, perhaps to suggest tension, which, though, it doesn’t. 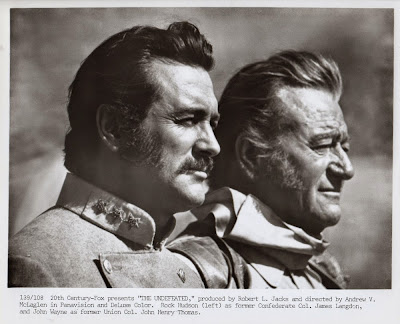 Noble profiles
There’s a fourth of July shindig in which both sides put up a dumb-ox prize fighter for a bout, which of course degenerates into a McLintock!-style free-for-all supposed to be highly amusing. You do get the feeling right about now that the writers and director were searching about for something to fill in the minutes, which are rather beginning to drag.


Normally in Hollywood movies Maximilian and his foreign forces are the baddies and the Juaristas are noble freedom fighters but here the Juaristas under General (pronounced Heneral, natch) Rojas (third-billed Antonio Aguilar, the famous Mexican singer-actor who was to write and star as Zapata in 1970) are rotters, stealing the horses and shooting people with a firing squad. Of course at the end the two colonels join forces and get the horses to Rojas before he can execute anyone else but suddenly the movie ends and you are left unsatisfied. The two ought certainly to have beaten Rojas and got their nags back.


Still, the lovers go off happily ever after and all’s well that ends well.


It’s a sort of Major Dundee without the quality. I prefer Chisum.