First of the 1960s Wayne Durango Westerns, and a lot of fun

In 1965 John Wayne was recovering from quite drastic cancer surgery. The Western-loving public was holding its breath. Would he come back as a Western star? Of course he would. With the strength and guts and work ethic he had, he’d be back in the saddle alright. The Sons of Katie Elder was the first in a whole series of big, commercial, well-made movies that he made down in his beloved Durango, Mexico, 1965 - 73. The others were The War Wagon, The Undefeated, Chisum, Big Jake, The Train Robbers and Cahill, US Marshal. The pictures were box-office successes and gave Duke weight and dominance. His then wife Pilar was dismissive of them:


Looking back, I can barely tell those Durango films from one another. They had a sameness of story, plot and location which seemed like a disservice to Duke’s fans. Different casts are the only thing which made them stand apart.


But in fact she was wrong. They had very different stories but similar casts. Wayne gathered his stock company about him and used them in successive movies. Ben Johnson and Harry Carey Jr., Paul Fix, Bruce Cabot – the usual suspects. And he used favorites for the crew too. His son Michael as producer, Carl Anderson as art director, William Clothier and Lucien Ballard as cinematographers, Henry Hathaway, Burt Kennedy or Andrew V McLaglen to direct. And they did a good job; they were professionals. The films did well in the theaters; people liked them. And they fixed Wayne in the mind as a larger-than-life Western star. These were in many ways the golden years of the John Wayne Western. 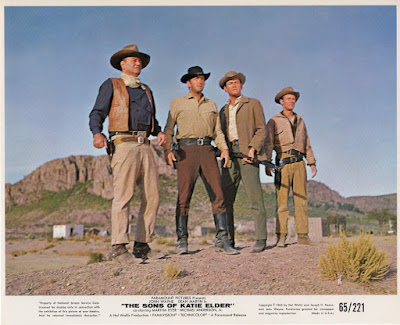 The sons of Katie Elder: Wayne, Martin, Holliman, Anderson
Though Durango, Mexico locations were used, it is Durango, Colorado where the movie opens, as the Durango/Silverton railroad through the Royal Gorge is featured.

Royal Gorge in opening shot
Three sons of the late Katie Elder are at the Clearwater, Texas depot awaiting the arrival of the fourth, John. He isn’t on the train, though. It’s George Kennedy who gets off, all in black, a gunslinger if ever there was one, as Sheriff Paul Fix can tell right away. In fact the delayed entry of Wayne is rather well done: the public also awaits him, with bated breath. How will he appear after his surgery? Well, he appears monumentally when finally he is seen. Shot from below, standing on a crag, like a crag himself.


Lucien Ballard was the cinematographer, one of my all-time favorites. He really was an artist. Later he has some great shots of horses being driven, as there were too in another of these Westerns, The Undefeated (McLaglen/Clothier). There are also some fine landscapes, and the shoot-out among the tree roots is very well done. It's Technicolor and Panavision; no expense spared.

Sheriff Paul Fix
There is a slight problem with chronology: John (born 1907) is supposed to be the oldest brother of Bud (Michael Anderson Jr., born 1943). We are told their mother married in 1850, and there are 36 years between the brothers. It’s 1893 now… Oh well, who’s counting? John does rather look his age (well, he would) so it isn’t all that convincing but never mind.


The other brothers are Earl Holliman and Dean Martin, the latter reprising his co-starring role with Duke in Rio Bravo. Dino is also not convincing as Wayne’s brother but never mind that either. He plays the part as the roguish, ne’er-do-well son, Tom. John’s a gunfighter so he’s a not-often-do-well. Earl as Matt Elder is more respectable. I think he said he owned a store. Of course Holliman had parts in Broken Lance and Gunfight at the OK Corral to his credit so was well known to Western audiences. The kid brother Bud has been off to college, at his ma’s wish, so they have all been away and have ignored their poor widowed mother.


Yes, widowed: Pa was shot in the back. Now it occurs to the four to wonder who did that. As a bad guy has also taken Ma’s ranch, he’s a likely candidate. The bad guy is Morgan Hastings, who owns half the town and wants all the rest. He is James Gregory, usually a tough cop but equally good as a Western villain. He’d been in oaters since Gun Glory, a Stewart Granger B, in 1957, and was the Army general in A Distant Trumpet in 1964. He made many appearances in Western TV shows. His son is a scaredy-cat lowlife, Dennis Hopper. Father and son run a firearms business, so are well placed to bushwhack. Rodolfo Acosta is one of Gregory’s henchmen, though sadly has very few lines.

Bad man Gregory sights in his scoped Remington
Loads of other old-favorite character actors populate the town, which is nice. James Westerfield is the banker, John Doucette is the undertaker, Percy Helton is the storekeeper. Strother Martin has a comic role in the saloon. Fat Rhys Williams turns up in a buggy. John Qualen, an old member of John Ford’s stock company, is a deputy. Familiar faces. Very enjoyable.

Kennedy, Westerfield, Doucette, Qualen, Hopper, Helton, Williams - great!
I say it is 1893. Duke refers to the Daltons, who died the year before. He says they were “hung” whereas of course they were shot (or in the case of Emmet imprisoned) but who needs accuracy when dealing with the Old West? Wayne wears his usual rig, leather vest over a cavalry shirt, and that old yellow-handled 1873 Colt .44/.40 he always had, whether the story was set in the 1860s or 1900s.

Duke lets rip with his Colts
Gunman Kennedy is beating on Doucette when John comes along and whacks the bully in the face with a piece of hickory, like Clint in Pale Rider. That’s telling him. Mind, we see him soon after with no ill effects at all; you'd expect the make-up department to have made his face black & blue.


Martha Hyer (Rory Calhoun’s amour in Red Sundown and Jock Mahoney’s in Showdown at Abilene) is the love interest, kinda, Mary. She is at first scathing to the brothers who deserted their saintly ma, but comes round to thinking John a good egg when she receives Katie’s rocking chair as a bequest. She’s twenty years younger than John but well, that’s OK. 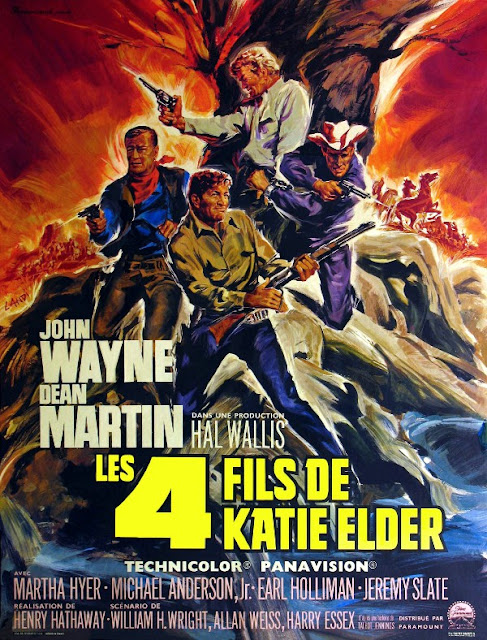 A lot of fun
The music is by Elmer Bernstein and excellent in that Bernsteiny way, stirringly orchestral and catchily whistlable. It gets you urging the good guys on.


There’s a choreographed final shoot-out in a gunpowder store and neat resolution of the crimes, and the baddies get their just desserts. Natch. The final shot is of the rocking chair rocking, suggesting future domesticity for John.


All good stuff, if you an undemanding Western-lover, and if you aren’t, why are you reading this blog? 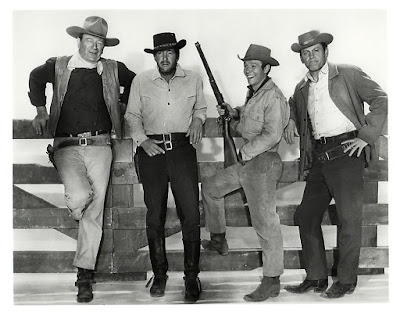