The series winds down

Regular readers will know that I have something of a penchant for Tim Holt oaters. They were so innocent, somehow, but they were full of energy and a lot of fun. RKO churned them out at a rate of three or four a year throughout the 1940s, though by the time of this one, Law of the Badlands, the formula was getting a bit tired. The series ended in 1952.


It’s a classic Tim & Chito Western directed by the more than competent Lesley Selander, as so many of them were, and it has all the ingredients we have come to expect. There’s Chito Rafferty the Mexican-Irish sidekick (Richard Martin), and the two pals get into scrapes, then out of them. Chito chases the girls, though runs a mile when one proposes to him. Tim (he’s Dave Saunders this time) remains chaste and just concentrates on thwarting the nefarious schemes of the villain and smiling winsomely. 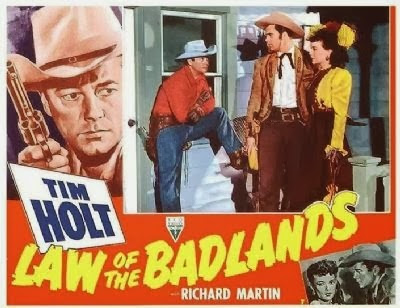 Only the poster was in color
Like many of the series, it had a screenplay by Ed Earl Repp, an advertising man and newspaper reporter who wrote a great many pulp-magazine stories before World War II, when he began to work as a screenwriter. He occasionally used the pseudonym Bradnor Buckner. It’s formulaic writing but tight and professional.


Music is again by Paul Sawtell, who (great job, really) churned out scores of scores for countless cowboy pictures, always stirring and energetic, and occasionally martial. This score is Lone Rangery.


The Holt-Martin/Selander/Repp/Sawtell team worked well for RKO and the theaters filled, mostly admittedly with juveniles, so they kept on making them until TV pretty well killed them off. 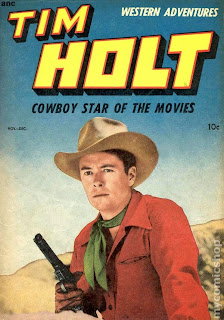 Every 40s cowboy had to have his spin-off fanzine
This one’s a tale of counterfeiting (a very common theme in 30s and 40s Westerns, less so in 50s ones) and Tim and Chito are Texas Rangers, sent under cover to the badlands to uncover the plot. They rob some robbers to get a rep and inveigle their way into the gang. The Silver Dollar saloon in Badland, TX is the base of operations of the bad guy. How great to have a town named Badland. These villains usually had a saloon, a mustache, some henchmen and often a derringer, though sadly not the latter this time. This slimy town boss is Cash Carlton (Leonard Penn, 82 B and TV Westerns, 1938 - 58) in a series of suits of an ever-louder check.


There’s a bit of ‘business’ with carrier pigeons. It’s how Tim, sorry, I mean Dave, gets messages secretly to his Ranger boss in Willcox, Capt. McVey (not McNally), played by Kenneth MacDonald.


Joan Dixon is the saloon gal dame, Velvet. She was the go-to female lead for the last five Tim Holters, 1951 – 52. She blurts out that Chito and Tim are Rangers. Doh.


Oh well, you have missed little if you do not watch this movie. Still, if you’re like me, you wouldn’t feel that you had wasted your time if you did watch it.