I always thought hatred was the noun, not hate, but ‘Guns of Hatred’ doesn’t seem to work somehow. Whatever. 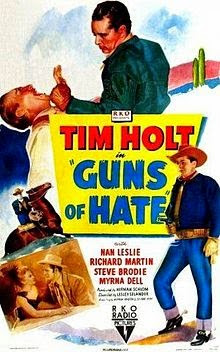 Not an epic of the genre but a lot of fun
It’s another Tim Holt programmer in the long series that began in 1940, 47 in all, and ended in 1952. Many of them were directed by Lesley Selander, a very safe pair of hands, and Guns of Hate is no exception. It was one of five Westerns Tim starred in during that rather epic year in the history of the oater. As was so often the case, he also has Richard Martin as Chito Rafferty, his Mexican-Irish sidekick, riding alongside, work-shy English-mangling philanderer that he was. It’s odd that while Chito remained Chito throughout, Tim Holt, confusingly for Chito, went under a whole series of aliases, including that of Tim Holt. In this one he is Bob Banning. 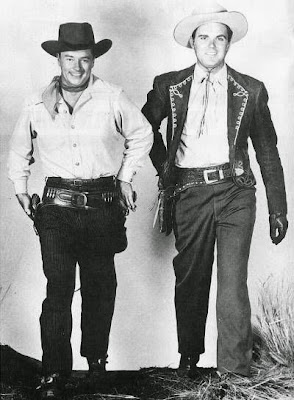 Tim & Chito
We are down in Rimrock in Arizona, where many of these movies were set, though they were shot in California. It’s the usual formula: skullduggery. The plot concerns a chap, Uncle Ben, who has found the legendary Lost Dutchman mine (no, it’s not Glenn Ford; audiences would have to wait a year for Lust for Gold) and a crooked assayer (Tony Barrett, who was in four Tim Holt oaters) who realizes where the sample has come from and tells even crookeder town boss Anse Morgan (Steve Brodie, Bob Dalton in the enjoyable Badman’s Territory). Morgan and his henchman Rocky (Robert Bray, Ranger Corey Stuart in Lassie) murder the honest miner Ben to get the money-belt of nuggets and the map giving the mine’s location which he just happens to be carrying. Such baseness. Worse, Tim and Chito get blamed for the crime, even though they were nobly trying to help.


There’s a saloon gal who helps the pals. She’s Dixie, who naturally loves Chito (the girls rarely show an interest in Tim, nor he in them). Now don’t get confused: this is not the saloon gal Trixie, the one who broke them out of jail by hiding a derringer in a cake; that was in Rustlers the next year. No, this is Dixie (Myma Dell) but Dixie is just as resourceful as Trixie. There’s a great bit where she opens her parasol right in front of the lawman and makes him miss his shot at the fleeing jailbirds. 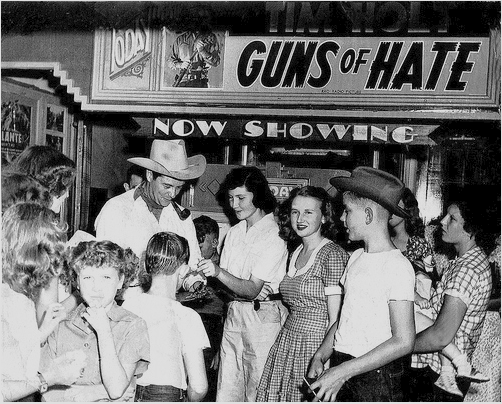 Tim with a pipe signs autographs for a probably representative audience
Uncle Ben is played by Jason Robards Sr., no less. Mr. Robards had been in Westerns since the silent and early talkie days, but he also did a lot of post-war B and TV oaters. He has a glam niece, Judy (Nan Leslie, also a Tim Holt regular) so there’s plenty of pulchritude to go round. There was often a slightly posh dame and a more louche one in these movies. Usually, the hero dallies with both before going off in the last frames of the final reel with one, usually the more respectable lady but not always. But in Tim Holt Westerns he nearly always leaves the dallying to Chito.


A posse chases Tim and Chito but there are only five members so the boys easily give them the slip (everyone knows there ought to be seven in a posse) and set off to prove their innocence of all felonies.


Of course that same year Tim Holt appeared in the magisterial The Treasure of the Sierra Madre and showed he could really act. 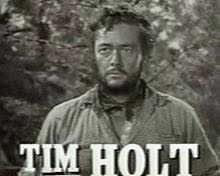 In Treasure of the Sierra Madre
In Guns of Hate and the other programmers he made he didn’t really get the chance to do that. But do not scorn these one-hour Tim & Chito Westerns. They are a lot of fun. 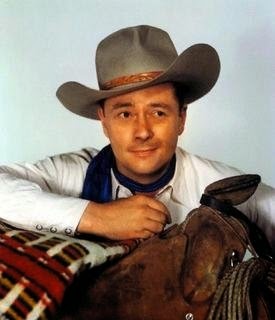