Somber, visually impressive, not at all bad

‘A man alone’ is a concept that in many ways distills the very essence of the Western story. We have discoursed elsewhere on the notion of lone-ness and its importance in the genre. Click the link to ponder further. But it gives the title of this 50s B movie a certain resonance, anyway. 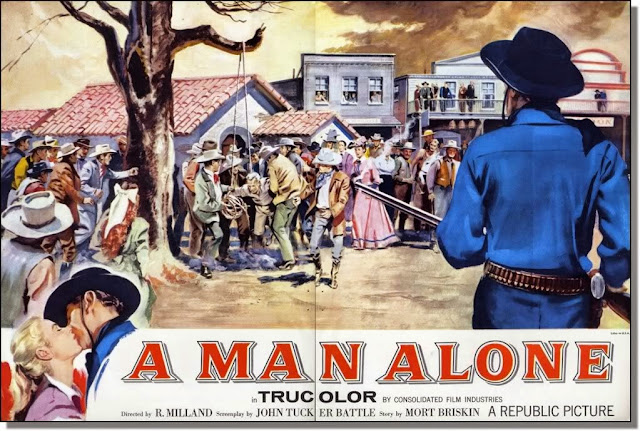 Worth a watch
A Man Alone stars and was the directorial debut of Ray Milland. For me, Mr. Milland never quite convinced in the saddle, though I will say that this film was his best in the genre. Britisher Milland had become one of Paramount’s most bankable stars in the 1940s and had a suave aspect to him that made him very good as a posh chap getting a pal from Cambridge to murder his wife for Hitchcock in Dial M for Murder or as charming cynic Alan Howard in French Without Tears in the movie version of Rattigan’s play, but as Wes Steele the Texas gunman? Hardly. 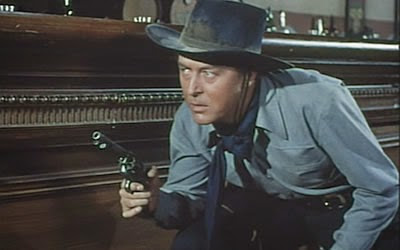 Posh Brit as Texas gunfighter: he almost carries it off, too
He had a go at Westerns, though. After all, Stewart Granger, another posh Brit, made a good fist of them, so why not Ray? He appeared with Barbara Stanwyck in the semi-Western pot-boiler California in 1947 and then got a Western lead role in 1950 in Copper Canyon, both directed by John Farrow (and both pretty weak). Then came the (I’m sorry to say it) unconvincing Bugles in the Afternoon, in 1952, a travesty of a fine novel of the same name by Ernest Haycox. A Man Alone, three years later, was his last crack of the Western whip (aside from a couple of TV movies in ’63 and ’71). As I say, though, A Man Alone is his best Western and the film is directed and shot interestingly enough to make it definitely worth a watch.


Milland went for a somber atmosphere, and succeeded. The John Tucker Battle screenplay from a story by Mort Briskin (producer of Sheriff of Cochise) was inherently a bit on the dark side, about a lone gunman, Wes Steele, whose horse breaks a leg in the Arizona desert land and who is obliged to walk. He comes across a stagecoach whose occupants have been massacred. In the nearby town of Mesa he is blamed for the massacre, though he overhears the true perpetrators confabulating. They are, pleasingly for us Western fans, Raymond Burr as crooked banker Stanley and his henchman Clanton, Lee Van Cleef. Of course these names are clear signal to all proper Western fans: a Texas gunman has to be named Wes in honor of JW Hardin and ‘Steele’ has a good hard ring to it, and a man named Clanton is automatically branded a baddy. ‘Stanley’ was a bit disappointingly bland, though. 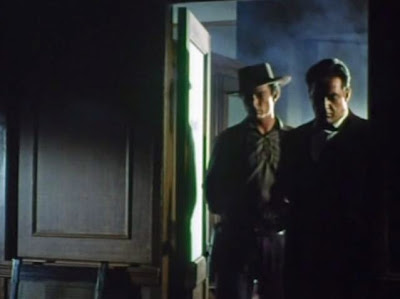 Somber
The sheriff of Mesa is Ward Bond, so that’s good, but he is holed up at home, quarantined with yellow fever, muttering deliriously for the first two reels, and so his even corrupter deputy is in charge. Luckily, for it’s a very good cast, this stand-in lawman is Alan Hale Jr. Alan often played the good guy but when a baddy, boy, was he bad. An excellent Western actor in every way. Ditto for Van Cleef, obviously, the archetypal henchperson really, and Ray Burr, pre-Perry Mason, did a lot of crooked banker parts in Westerns, and was very good at them. Think of Station West or Horizons West. 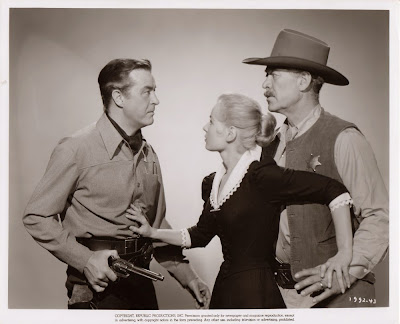 Sheriff Ward Bond and gunslinger Ray Milland: Mary Murphy comes between them
The DP was Lionel Lindon, who with director Gordon Douglas had done a similar job of shooting a noirish, sinister setting (on a minimal budget) in Only the Valiant. Much is done at night. It might have been better in black & white than in Republic’s patent Trucolor, although there are some almost Dutch interiors improved by the dark palette of colors. The score is by Victor Young and also adds to the somber tone. No words are spoken in much of the first reel, as Steele shoots his crippled horse and finds the stage full of corpses. In town, he hides in the cellar of what turns out to be the sheriff’s house (doh) and is nice to some kittens, so we know he is a good guy really. But 30 minutes in and Ray still hasn’t said anything. 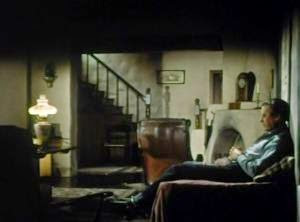 Fine composition, almost Dutch interiors
Of course Sheriff Ward Bond has a glam daughter, ça va sans dire, and she is Nadine, played by Mary Murphy. Ms. Murphy was the waitress who fell for Marlon Brando in The Wild One two years before but Westernwise she had been one of the Women who went Westward with Robert Taylor in 1951 and was Dale Robertson’s squeeze Kathy in Sitting Bull in 1954. This was her third Western, and her last until she was excellent for Sam Peckinpah as Ruth Bonner in Junior Bonner in 1974. In between she appeared in a lot of TV Westerns. In A Man Alone she is a strong, even feisty woman who in a way acts as her father’s conscience. 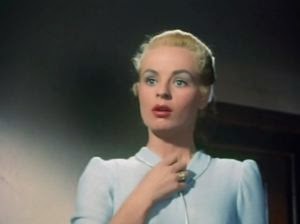 Mary Murphy
Ray is one of those gunfighters trapped by his reputation into conflict with the next punk aspiring to be “the fastest”. We have seen these since The Gunfighter in 1950 and well before, and we were still seeing a gunfighter trying to throw off his past in Unforgiven in the 1990s.


There’s a lynch mob, always an ugly scene. There’s an earnest speech about hardship which ought probably to have been cut. I liked the saloon.


At the end, Ray announces, “I’m stayin’.” This seems to be, though, not from any great passion for Nadine or love for the town, just an idea that nowhere else would really be any better.


All a bit gloomy, then, and a bit slow too, it must be said. Variety damned it with faint praise as “an okay offering”, adding that “Ray Milland turns director with Man and acquits himself fairly well in the new chore.” But I think it’s all rather better than that and if I were you, e-pard, I’d give it a go.