Allied Artists grew out of the Poverty Row studio Monogram. Monogram producer Walter Mirisch had great ambitions and wanted “B-plus” pictures, even, gasp, in color. At a time when the average Hollywood picture cost about $800,000 and the average Monogram picture cost about $90,000, AA's first release, It Happened on Fifth Avenue (1947), cost more than $1.2m. Despite the budgets and color, though, AA pictures in the 40s and 50s still looked like, well, big Bs.


Dragoon Wells Massacre was a typical example of a 1950s AA Western. At 88 minutes, in color with Kanab, Utah locations photographed by William Clothier and with a strong cast, this was no poverty row programmer. It was directed by Harold D Schuster, former silent movie actor (he’d been in The Iron Horse; but then, who hadn’t?) and became an editor and then a director. He did the rather touching My Friend Flicka (the 1943 film version) and in 1953 he made Jack Slade, a B which punches above its weight and has some quality. The direction of Dragoon Wells Massacre is tight and controlled, though it is hard to keep up the rhythm in movies about people walking through a desert. 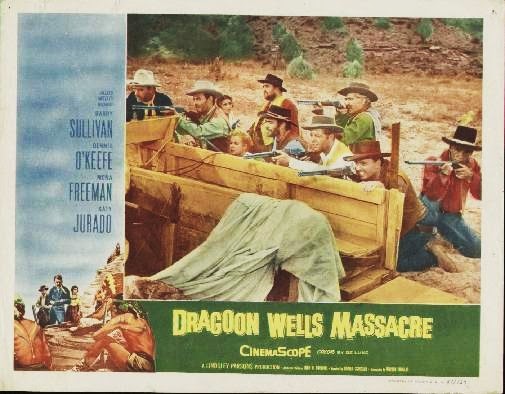 Worth a look
The writing has quality too, even if the premise of Judge Isaac C Parker’s prison wagon, known as the Tumbleweed, trawling through Arizona for prisoners is a bit far-fetched. But there are some good lines, and characters are developed; they are not just cardboard cut-outs of people. The screenplay was by Warren Douglas, who had written Cry Vengeance and would later do The Night of the Grizzly, from a story by Oliver Drake, who wrote Three Mesquiteers stories.


As for the cast, well, Barry Sullivan got top billing and while I must admit never to have been an ardent Sullivan fan (as far as Westerns are concerned) I must say he is very good in this, carrying off the ‘charming rogue’ role of Link Ferris well. On TV he reduced Pat Garrett, I thought, to a character in a soap in The Tall Man, and the story of the Prides in The Road West never really gripped me either. And on the big screen he was pretty poor in Forty Guns (but then the movie was junk). Still, he’s worth watching Dragoon Wells for. 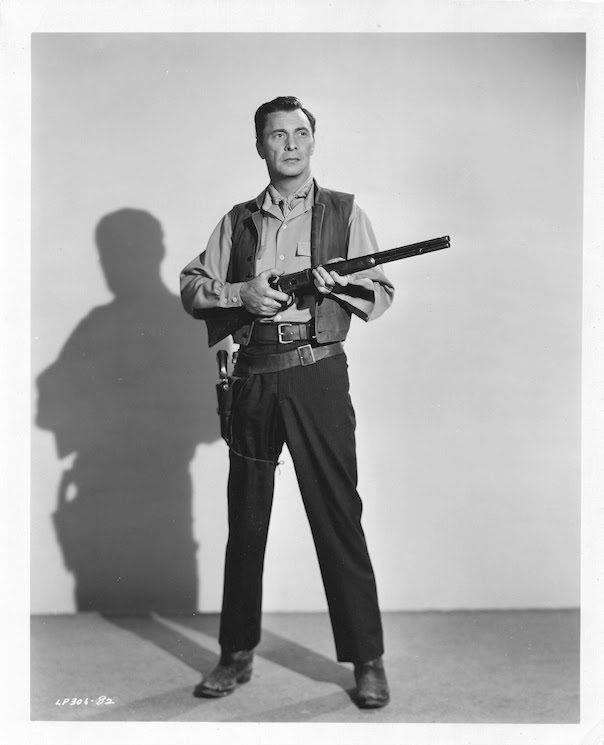 He never really made it in Westerns but is good in this one
The straight man to his likeable scoundrel is Dennis O’Keefe, who plays an upright and commanding cavalry captain, Matt Riordan. O’Keefe, friend of Clark Gable, was a low-budget action movie go-to and a natural for B-Westerns. He’d started as an extra on Cimarron in 1931 and The Plainsman in 1936, and his first starring role in the saddle was in MGM’s comedy-romance The Kid from Texas in 1939. But he didn’t do a great number of oaters, being cast more in rom-coms. He’s OK in Dragoon Wells and gets into the part fine. He is sole survivor of the first massacre and takes charge of the strange mixture of odd-bods that turns up afterwards. 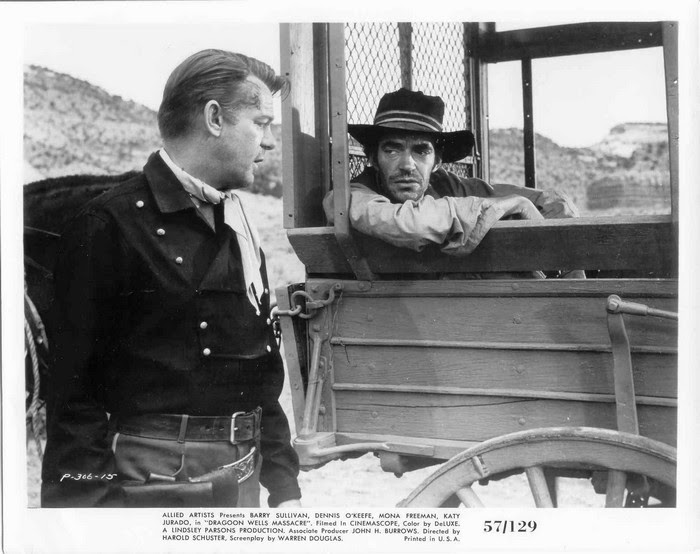 Stalwart Capt. O'Keefe with prisoner Jack Elam in the Tumbleweed prison wagon
The two men, crooked gambler and stalwart captain, are in a way linked by the same dame, Ann Bradley (Mona Freeman, six Westerns, Alan Ladd's love interest in Branded), passenger on the stage with her fiancé Phillip Scott (Max Showalter, as Casey Adams). This is a mystery because the Bradley woman is perfectly detestable. Scott realizes this eventually and dumps her. Riordan is her ex and can’t stand her, rightly. Link at first taunts her and she hates him but eventually they hit it off, which, as the French say, is peu credible. The poor man is saddled with her at the end of the film as he tries to ride off to California and the wretched woman pursues him. This happened to Mr. Sullivan a lot because the same year, just when he thought he’d shot Barbara Stanwyck in Forty Guns, she ran after his buckboard and he was stuck with the harridan for life. 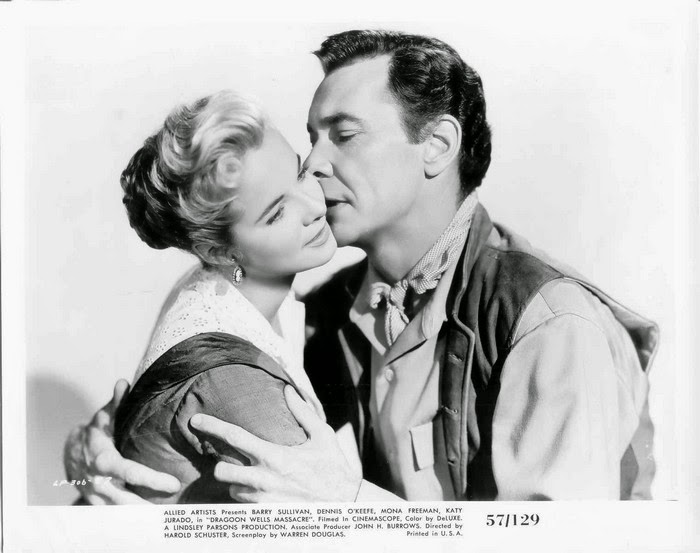 Improbable romance
The story hinges on three conveyances converging on the site of a massacre of soldiers by Apaches. The aforementioned Tumbleweed, containing Link and fellow-crook Jack Elam (in a very sympathetic performance); then the stagecoach with Hank Worden as Hopi Charlie, the driver, and Freeman and O’Keefe as passengers – also aboard is the gorgeous and wonderful Katy Jurado, by far the most sympathetic character of the movie; and a low-life Indian trader’s wagon conducted by the lone, and very fat and always entertaining Sebastian Cabot. You certainly didn’t get many of Mr. Cabot to the pound and he played in TV Westerns, usually as the baddy, quite a bit. He only did three Western movies, more’s the pity, this one, Westward Ho, The Wagons! And the excellent little Sterling Hayden noir B-movie Terror in a Texas Town, in which he was the smiling saloon-owner villain. In Dragoon Wells, it turns out that Mr. Cabot has been selling both whiskey and guns to the Apaches and that makes him a very bad boy indeed. 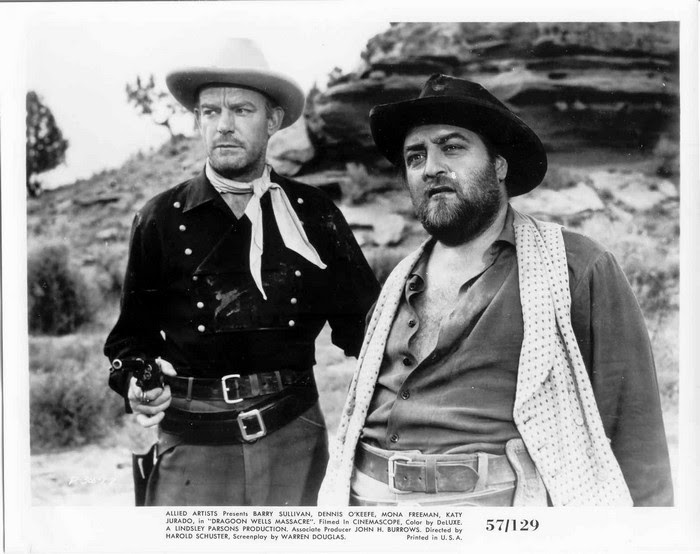 Disreputable Indian trader Sebastian Cabot
The three small parties have to decide what to do and they opt (well, Riordan bossily opts for them) for making for a fifteen-mile-distant relay station all in the wagon. The story now becomes one of those ones in which the group stagger forward through the arid and inhospitable terrain harried by thirst and the hostile Indians, and are picked off one by one. In fact the film really ought to have been called The Dragoon Wells Massacres because there is a series of the said mass murders. When they get to the relay station it has been burnt and the inhabitants, yes, massacred. They pick up the sole survivor, a little girl. Then they get to the fort at Dragoon Wells and guess what. Yup, the garrison has been massacred. They sure did a lot of massacring in Arizona in them days. 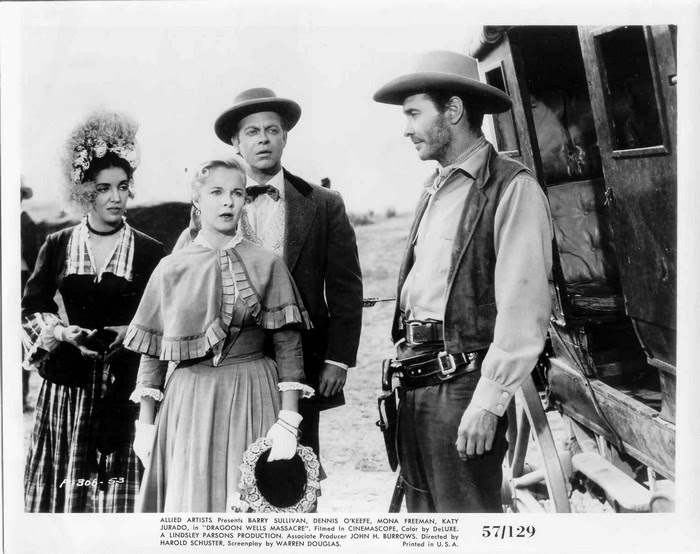 On the left, wonderful Katy Jurado, less than wonderful Mona Freeman and her rather ineffectual fiancé Casey Adams
Yellow Cloud (John War Eagle) gets the blame. This is perhaps the Yellow Cloud that Iron Eyes Cody played in Son of Paleface but I don’t think so really. The Apaches are, as was normal in B-Westerns, homicidal and indistinguishable savages. Though in the 1950s, from Broken Arrow on, they were starting to be presented as real people and with a certain amount of right on their side, AA hadn’t quite caught up with this trend. Of course Geronimo gets a mention. The G-word would always excite fear and trembling among lone whites. Mr. Cloud is apparently Geronimo’s henchman. 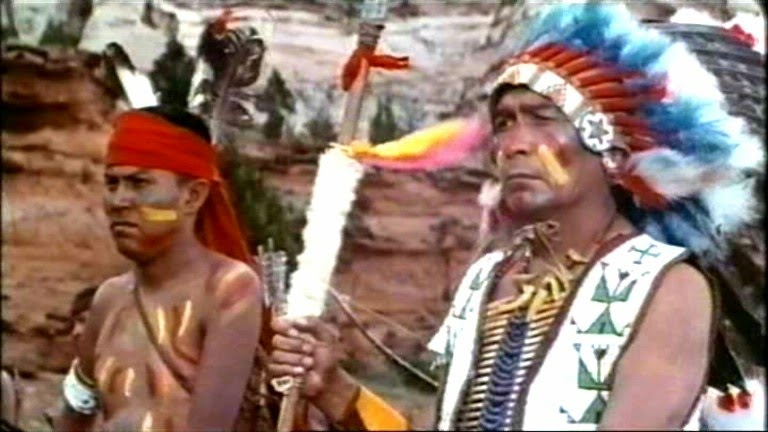 John War Eagle as two-dimensional Indian chief Yellow Cloud. Dig the make-up.
Well, Indians, thirst and bad guys in the party gradually whittle away at the numbers and the original eleven shrink to six, or six and a half if you count the child. Relationships develop and wither. Tension does its work. There’s a regrettable fight between Mona and Katy, which should have been cut (though it would have been OK if Katy had taken Mona out). Rather as in Stagecoach, I guess, it’s society’s outcasts who are the most likeable characters, Katy’s disreputable Mexican woman, Link the gambler, Jack Elam the ugly killer, while the ‘respectable’ folk like Mona the lady are shown as weak, helpless and essentially worthless.


On one level just another B-Western, Dragoon Wells Massacre has enough interest and quality to merit a three-revolver rating and, if it comes on TV for example, it would repay a watch.