The Carry On films were a series of British comedies which started in 1958. Pretty well everyone carried on: there was Carry On Nurse, Teacher, Constable and so on. There were 31 in all. They were low budget and, to be brutally frank, low comedy too, heavy with double entendre and saucy comments mixing with the slapstick. They have many fans, mostly in the UK. It was inevitable that there would be a Carry On Cowboy, and indeed that arrived in 1965. 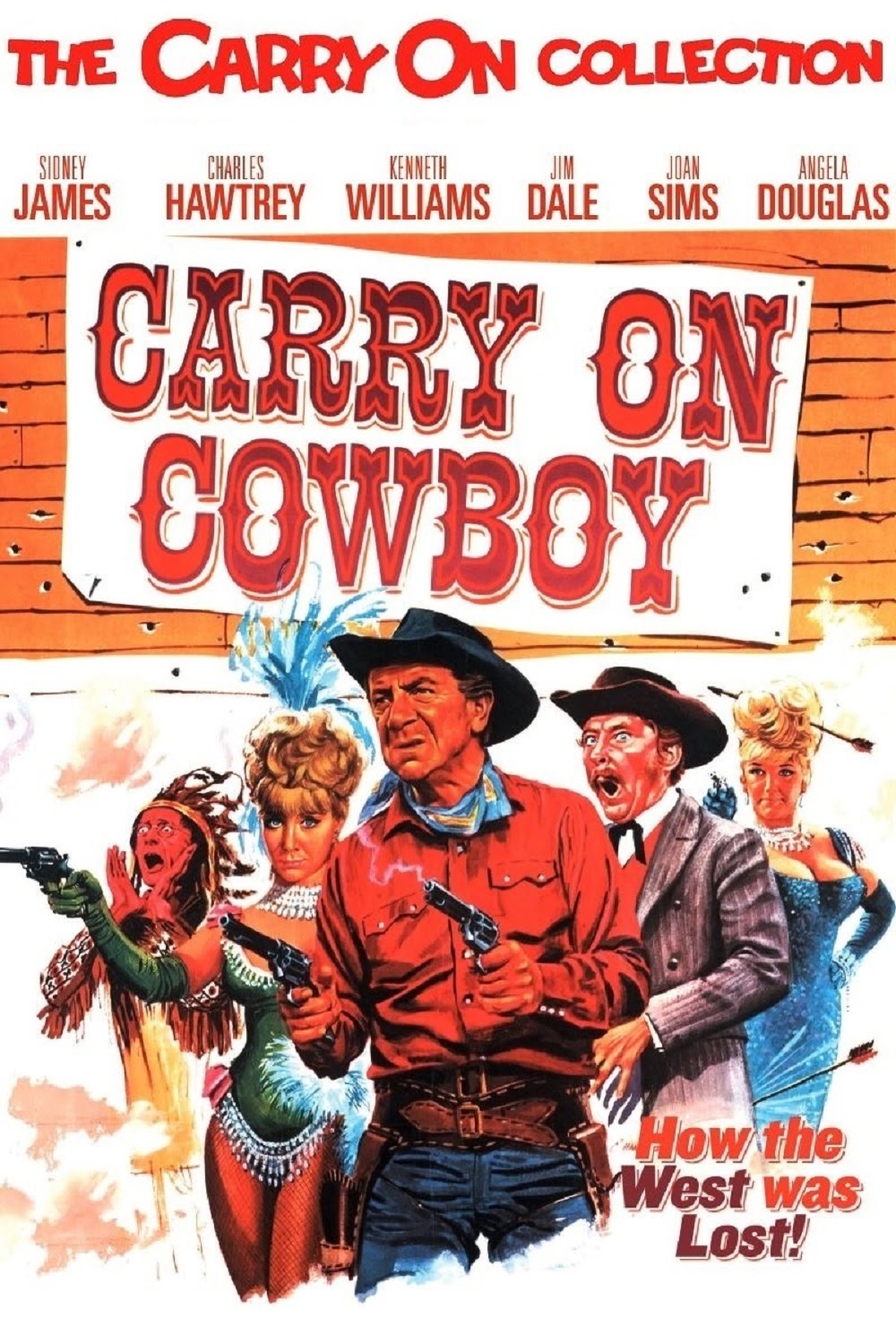 Hilarious?
There is a surprisingly strong tradition of the British Western. You might think that the Brits made their ‘Westerns’ about the far-flung corners of the Empire, with redcoats rather than bluecoats fighting Zulus rather than Apaches, and of course they did make many movies like that. But they also made ‘proper’ Westerns. Fate (1911) is said to be the first Western shot in color and there is quite a long line of Brit actors who did a good job in oaters, like Stewart Granger, for example. Sean Connery was  more than passable in Shalako. Christian Bale was superb in the 3:10 to Yuma remake. Kenneth More was exellent in The Sheriff of Fractured Jaw, a genuinely amusing Western. British producers, directors and writers, too, have made some really quite good examples of the genre. Michael Winterbottom directed the very good The Claim in 2000, a remake in Western key of the Mayor of Casterbridge. Alan Sharp (1935 - 2013) was a fine writer and The Hired Hand (1971) and Ulzana’s Raid (1972) are as good as anything an American wrote. His stuff reminds me of Elmore Leonard; it’s that good. So don't discount the British Western.


However, there were also British Western turkeys. Catlow in 1971 was a sort of Anglo-spaghetti. The Brit team of director Michael Winner and writer Gerald Wilson was hopeless and, even worse, disrespectful to the genre. They were responsible for Lawman (1971) and Chato's Land (1972), both very poor, despite the first having fine (American) Western stars in the shape of Robert Ryan and Burt Lancaster. Winner & Wilson just didn't get it, at all, and should have stuck to commercial Death Wish-type pulp. As for cheap comedy Westerns, Liverpool-born Arthur Askey (1900 – 1982) starred in the perfectly dreadful Ramsbottom Rides Again in 1956. And then there was Carry On Cowboy.


The actors were clearly having fun and I suppose we shouldn’t be too snooty. There is the odd mildly amusing bit. But right from the opening shot, with South African Jewish actor Sid James riding through Buckinghamshire on what looks like a horse that usually pulled the Shepperton milk cart, you kinda know it’s going to be 93 pretty grim minutes.


Mr. James was remarkably craggy-faced and claimed to have boxed as a young man, though was more noted in South Africa as a hairdresser. He was popular in the UK and in a lot of comedy films, and had a barking guffaw of a laugh which he uses a few times in Cowboy. He had been on the stagecoach when arms salesman More arrived in Fractured Jaw. He essays an ‘American’ accent but it’s actually quite painful. He plays gunfighter Johnny Finger aka the Rumpo Kid. At 53 he was a shade long in the tooth for 'kid' roles, but maybe that was the joke. 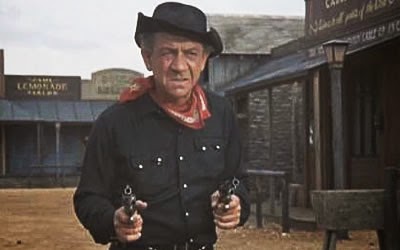 Sid James as the Rumpo Kid
He arrives in Stodge City, a town run by prudish judge/mayor Burke (you probably know that berk is British slang for a fool), played by equally popular British comedy actor Kenneth Williams, whose American accent is even worse, so bad in fact that it is quite funny.


Joan Sims is a rather imposing saloon gal, Belle, who shoots the glass out of Sid’s hand with a derringer at 50 paces, and then restores the gun to its ‘holster’ in her ample bosom. Sid also uses the derringer to kill Sheriff Earp, so at least it’s a two-derringer picture.


Yes, the sheriff is an Earp, Albert Earp (Jon Pertwee), who is as deaf as he is short-sighted, providing a series of slapstick ‘gags’. Earp’s daughter is Annie Oakley, so don’t watch this film if you want realism. Miss Oakley is played by Angela Douglas. She falls for Marshal P Knutt (Jim Dale). Marshal is his name rather than his office but back in Shepperton DC the powers-that-be mistake it for a title and send him to restore law ‘n’ order in Stodge. The joke is that he is really a sanitation engineer so doesn’t think it strange that he is sent to clean up the town. 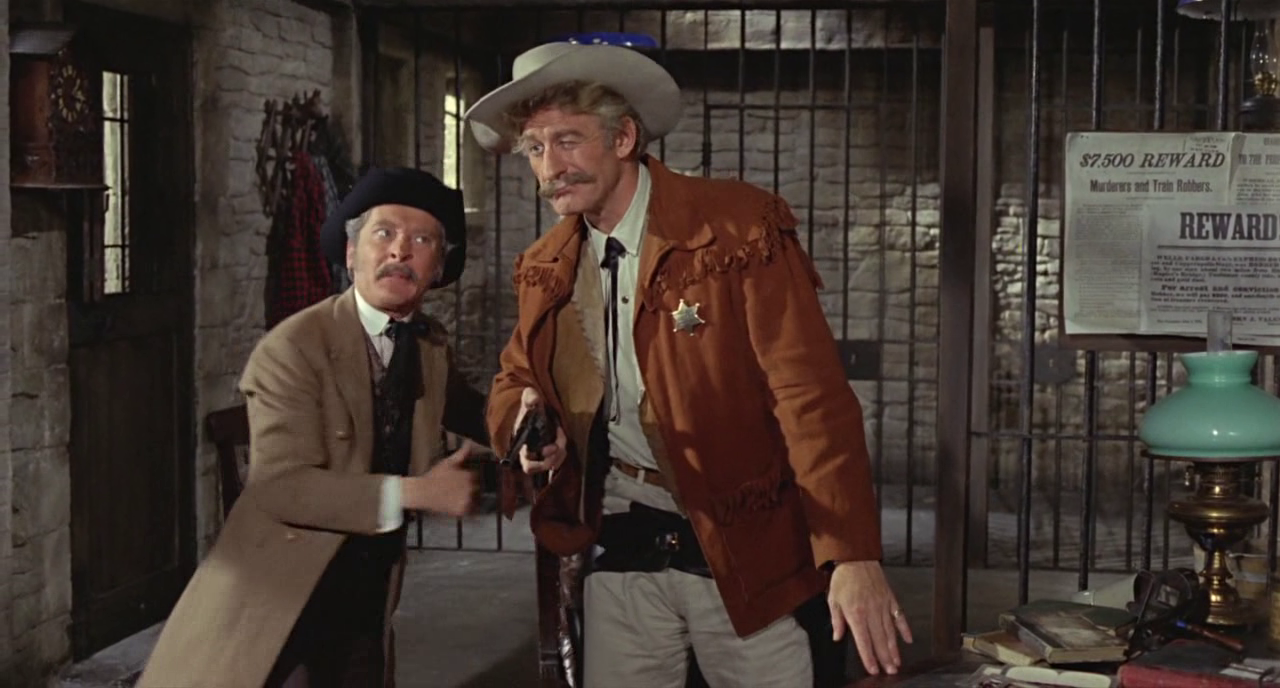 Judge Burke tries to talk to Sheriff Earp
There are Indians, of course, whose chief is Big Heap, whose son is Little Heap. These personages are played by camp Charles Hawtrey and dumb-ox Bernard Bresslaw respectively. These names will probably mean little to you unless you grew up in the UK in the 50s and 60s. 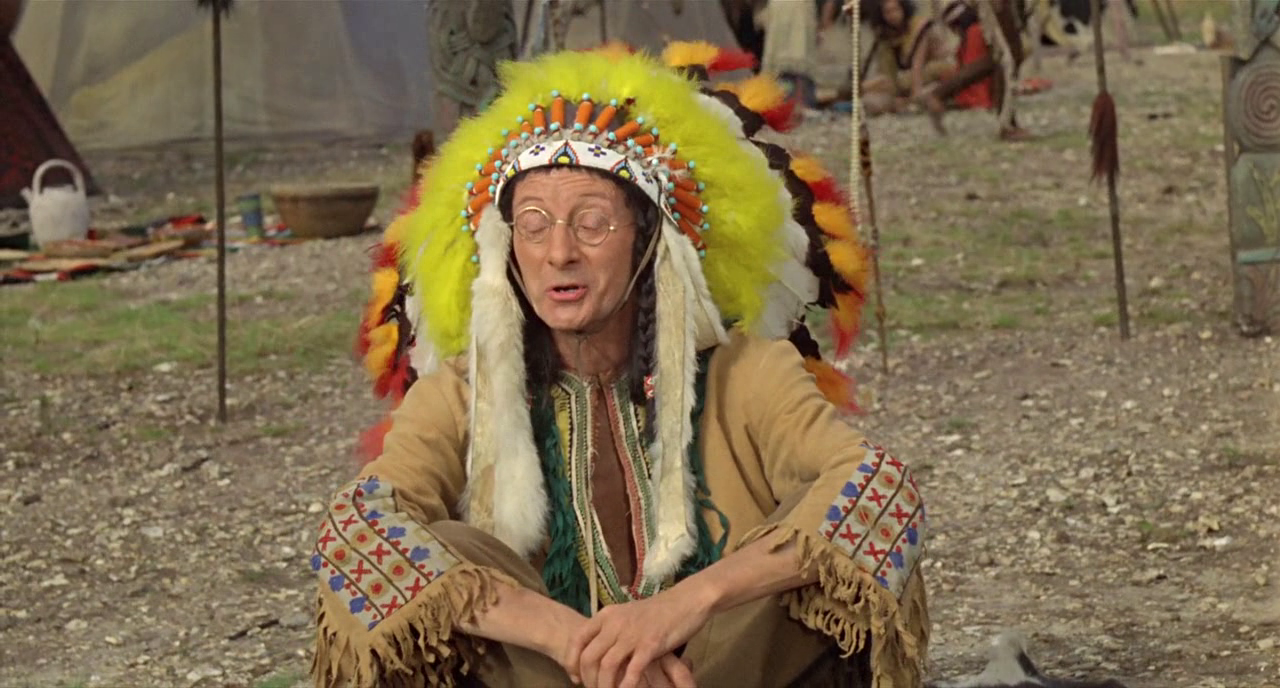 Chief Big Heap
There’s a High Noon ending as the showdown nears and the director (Gerald Thomas, who directed every single Carry On movie) concentrates on a clock ticking away time relentlessly. Of course it is a cuckoo clock.


Watch it if you must.