On one level Red Sundown is just another mid-1950s Rory Calhoun Western from Universal but I like it and I think it’s rather good. 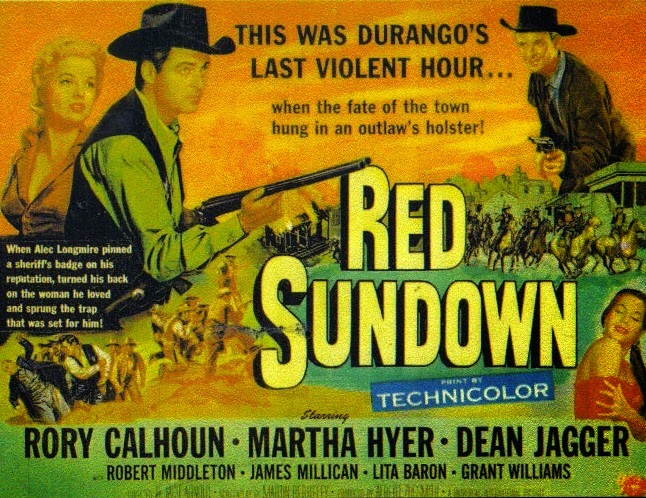 Top class 50s Western
I must admit that, as a callow youth (for I was one once) I was never a great Calhoun fan. He looked too slick and modern (i.e. 1950s). But I have grown to appreciate Rory in Westerns. I think he did them well. In his youth Calhoun had worked as a boxer, a lumberjack, a truck driver but also as a cowpuncher and he seemed well suited to the saddle. He’d started by co-starring with Guy Madison in Massacre River in 1949 and got his first Western lead (if Western it be) in the Jacques Tourneur-directed Way of a Gaucho in 1954. The following year he famously starred with Robert Mitchum and Marilyn Monroe in River of No Return. By the time of Red Sundown, his fourteenth big-screen cowboy film, he was well established as a Western leading man. 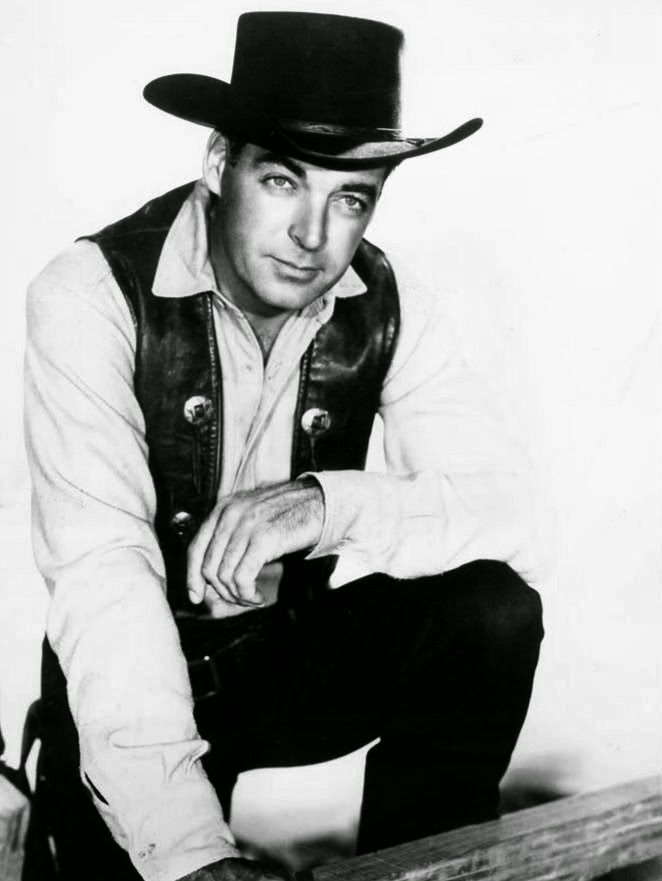 Rory Calhoun. 135 Western appearances 1949 - 92.
The director of this piece was one J. Arnold. Not, sadly, your own Jeff Arnold, blogger extraordinaire, but Jack Arnold, no relation. He was a horror/sci-fi movie man really and made some famous examples of that genre such as It Came from Outer Space (1953), Creature from The Black Lagoon (1954) and The Incredible Shrinking Man (1957). The IMDb bio says “His films are distinguished by moody black and white cinematography, solid acting, smart, thoughtful scripts, snappy pacing, a genuine heartfelt enthusiasm for the genre and plenty of eerie atmosphere” and that applies to his Westerns too, even the tinge of eerieness. He directed the superior Audie Murphy Western No Name on the Bullet, for example, which has slight horror touches, or at least a sinister atmosphere, though most of the oaters he directed were TV shows. 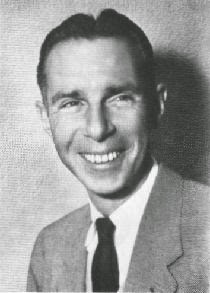 J. Arnold (not Jeff)
Red Sundown was well written by Martin Berkeley, sadly famous for having ‘named’ more Hollywood colleagues than anyone else to the HUAC, but a very capable screenplay writer for Westerns from Green Grass of Wyoming (1948) onwards. Later, he wrote a great number of TV oaters. His scripts were superior and added a touch of subtlety to the usual stereotype characters.


Like most Universal Westerns, this one was nicely photographed in Technicolor (by William E Snyder, who had done the excellent The Man from Colorado and The Americano, both Glenn Ford pictures) in attractive Thousand Oaks, Cal. locations. These films were visually good. Those Audie oaters and the Jeff Chandler ones were good examples. Universal didn’t stint on this.


Even the plot is slightly unusual. Rory is Alec Longmire (I wonder if that’s where Craig Johnson got his hero’s name from) who comes across James Millican’s character Bud Purvis, close to expiring in the desert. Both men are professional gunslingers; both are tired of the métier and would like to hang up their irons. They get to a town where, in the saloon, they have a contretemps with a bunch of hard cowpunchers who are led by one of the greatest of all Western heavies, Leo Gordon. Gordon was seriously tough (he’d served a term in San Quentin for armed robbery) and was outstandingly good in such a part. There’s a fight, Longmire kills Leo’s brother and the chase is on.

A gunfighter extends a professional courtesy to a colleague
The new pals hole up in a cabin and Leo and his murderous gang besiege it. Purvis (Millican at his best, and he was always good) is fatally wounded and devises a plan to bury Longmire under the dirt floor of the cabin, with a stovepipe for air, and it works. The thugs finish off Purvis and burn the cabin down but do not find Longmire, who, in true Jack Arnold style, once they are gone re-emerges from the grave like some zombie.

One of the best thugs ever. Leo Gordon.
What is unusual, however, is that normally in a Western one would expect the hero now to ride out on a revenge mission, to gun down Leo and his gang for what they have done. But nay. Longmire has made a promise to Purvis that if he gets out of this alive he will hang up his guns and get a steady job. He goes off to Durango (presumably the Colorado one) and does exactly that. In fact we never see Leo & Co again.


Of course we know that, as always when such men hang up their guns and try for the peaceful life, he will be obliged to strap them on again (the guns are rather cool in fact, one in a side holster and another Errol Flynn-like on the belt as a cross-draw, as you can see below in the snap of him with Robert Middleton. He used the same rig several times, e.g. in Utah Blaine).


Dean Jagger is sheriff of the town (with, obviously, a glamorous daughter, Martha Hyer) and he recognizes Longmire’s potential as a deputy. Longmire reluctantly accepts. The rest of the plot is a fairly traditional town-treed-by-ruthless-rancher story and Robert Middleton does a good job of playing mighty Rufus Henshaw, ready to hire professional killers to drive homesteaders off ‘his’ range. Sheriff Jagger and Deputy Calhoun are supposed to be impartial but we know which side they will come down on.


Middleton specialized in villains, especially the kind in suits, and was used to leading lynch mobs and bossing towns in a long series of films. Westernwise, he was first (mis)cast in 1956 as the detective ‘Mr. Siringo’, presumably Charlie Siringo, in the Elvis Presley Western notionally about the Reno brothers, Love Me Tender. Red Sundown was only his second proper Western (he was in Friendly Persuasion but I don’t really regard that as a true Western) and in it he established his future as dress heavy (heavy in all senses, actually). He went on to do loads of Western TV shows but I remember him from The Law and Jake Wade, Hell Bent for Leather and A Big Hand for the Little Lady. In Red Sundown he handles himself surprisingly well in a fistfight in the Llano Saloon and there appears to have been little use of stunt doubles. 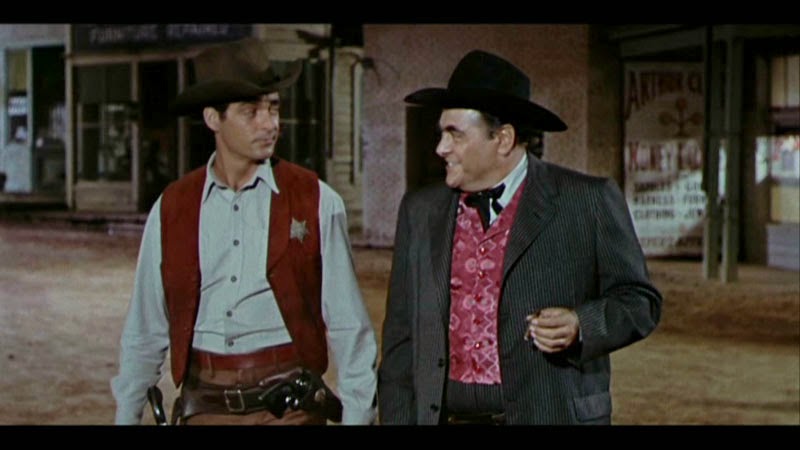 Ruthless rancher Middleton tries blandishments on an unimpressed Deputy Calhoun
Other casting was good too. I always thought Jagger was a very good actor and somehow suited to Westerns. He had started way back in an early Randolph Scott oater, Home on the Range, in 1935. He was Brigham Young for Henry Hathaway in 1940 and Edward Creighton in Western Union for Fritz Lang in 1941. He was outstanding as the sinister one-armed Grant in the Raoul Walsh-directed noir Pursued in 1947 and was Yancy in the excellent (though much underrated) Fox Western Rawhide in 1951, also helmed by Hathaway. Denver & Rio Grande followed and of course Bad Day at Black Rock. It was an impressive career. Red Sundown was his thirteenth horse opera.

Sheriff Dean Jagger
The other pleasant surprise was the discovery of Grant Williams as the smiling blond sadist Chet Swann, hired by Henshaw to gun down his opponents and relishing every moment of it. The scene where he is invited in to supper by a homesteader couple he has orders to evict is superb. He smiles, is notably polite but is utterly menacing, reducing the wife to tears by cutting her family-heirloom tablecloth with a bowie knife. It’s genuinely frightening. Williams had only signed to Universal in ’56 and the following year he was to make a real mark in the title role of The Incredible Shrinking Man. This was his big-screen debut but sadly he was only in five Westerns (though he did a fair number of TV shows). In Red Sundown he is outstanding, and reminds us a bit of creepy Robert Evans in The Fiend who Walked the West two years later.


One element was new to me: the treatment of a shotgun as a coward’s weapon. Presumably because you didn’t need the skill and accuracy of a pistoleer but could just spray your opponent from a distance, Sheriff Jagger, endorsed by a sort of juvenile Greek chorus of two onlooker small boys, declares that he would never lower himself by using a shotgun to go up against a man.

Greek chorus
That sure wasn’t the view of Sterling Hayden the year before in Shotgun (curiously enough, co-written by Rory Calhoun). Sterling had no qualms at all about blasting away with a scattergun. And it doesn’t stop Rory in Red Sundown either. Chet Swann sure backs off in a hurry. 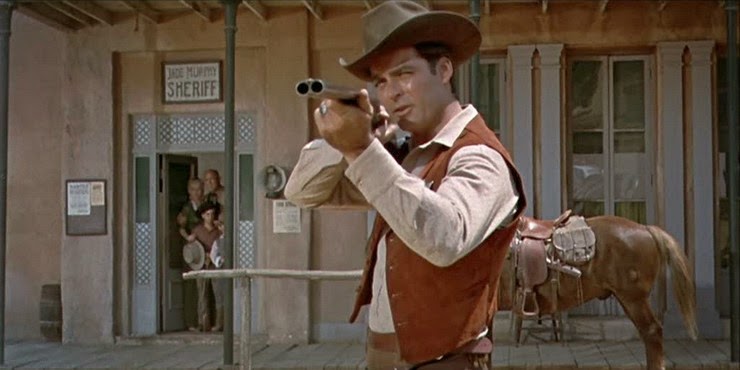