The exact geographic location of God’s country is open to debate. Often, it’s where you were born. This film doesn’t shed much light on the issue. In fact the country is hardly mentioned and little reference is made to any specially nice place. I don’t know why they called it that at all. I suppose Western Man from... movie titles had already covered pretty well everywhere else in the West, Laramie, Colorado, Texas, Dakota, and so on. According to the posters, the country is Montana, and the title in French is Le Bagarreur du Montana. Having been there I would say it was a good candidate for the title. 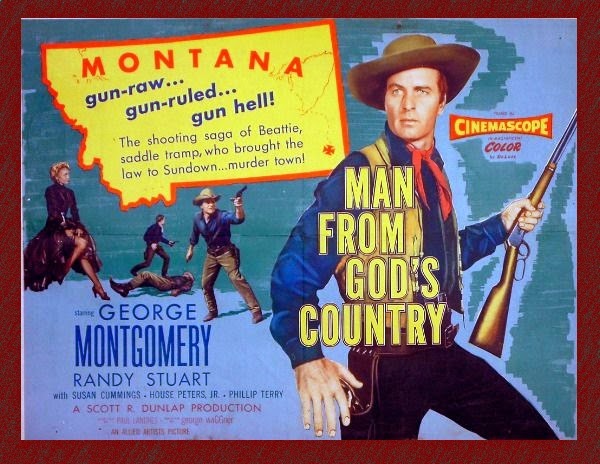 The man in question is presumably George Montgomery. He is the hero anyway. I always thought he looked out of place in Western costume. As though it were costume. He’d been in tons of oaters, ever since doing stunts in a Gene Autry singing cowboy picture in 1935, and he was in a lot of Autry, Roy Rogers and John Wayne B-movies after that as an extra or doing bit parts before finally taking the lead in the 1941 remake of Riders of the Purple Sage. He got a big part in another genre as Philip Marlowe in 1947 but the critics compared him unfavorably with Bogart and so it was back to the saddle. Through the 1950s he rode the range for Columbia or United Artists two or three times a year in many a forgettable B-Western. He was Jack McCall, Bat Masterson and a marshal who wooed Cimarron Rose. But for someone who made so many oaters he looked surprisingly wrong in them. 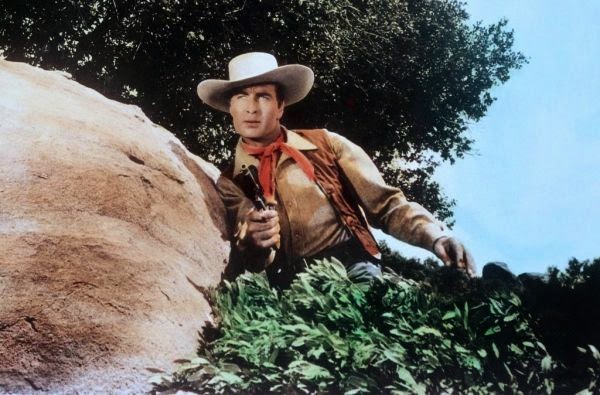 Allied Artists was a transmogrification of the Poverty Row studio Monogram. Monogram producer Walter Mirisch had great ambitions and wanted “B-plus” pictures, even, gasp, in color. At a time when the average Hollywood picture cost about $800,000 and the average Monogram picture cost about $90,000, AA's first release, It Happened on Fifth Avenue (1947), cost more than $1.2m. Man from God’s Country was in Color De Luxe and CinemaScope, and it clocked 72 minutes, so it was no cheap programmer. It was aiming for greater things. It sadly fell short of the mark.


It’s a railroad Western. George is a sheriff who shoots a man but the town is tired of guns and although the sheriff is exonerated in an inquest, he feels too much part of the old world, and resigns. He goes to Sundown to see an old war buddy, Curt (House Peters Jr., the sheriff in Lassie). This is doubtless the same Sundown where the year before a tough decision had to be made involving Randolph Scott. George first meets a boy (Kim Charney) and bonds with him, and this kid turns out to be Curt’s son. 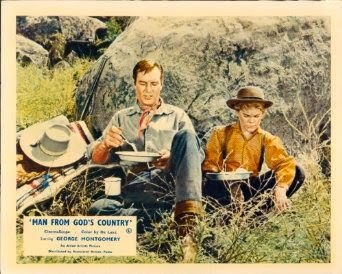 But, dear e-readers, it also turns out that Curt is working as a henchman for Beau Santee, the town boss, played by Frank Wilcox, whose father in real life was a railroad worker so perhaps that explains why he hates railroads and will do anything to prevent the lines reaching Sundown. Beau owns a freight line and fears that the railroad will drive him out of business. He has hired gunslingers, as ruthless town bosses are wont to do, and the chief of these is murderous James Griffith, that thin villain from countless movies, as Faber. In different films Griffith was William Quantrill, Bob Dalton, Doc Holliday and Judas Iscariot, so he didn't really specialize in good guys.


Beau mistakes George for a railroad man and so instructs Faber to murder him. However, Faber isn’t quite as good a shot as he thinks he is, and misses. Well, that miss turns out to be costly for him and Beau. Curt is a reluctant henchman, being basically good, and the question is, when will the worm turn?


There’s a saloon gal, naturally, to be romanced and to sing, and that’s Randy Stuart, who the year before was, of course, Grant Williams’s wife in The Incredible Shrinking Man. This was her second big role and it got her a guest appearance in George’s short-lived TV series Cimarron City later that year and then a regular part in The Life and Legend of Wyatt Earp. (I remember she was also Harry Morgan’s wife in Dragnet but that’s another story).


Well, well. Despite the budget, I fear that Man from God’s Country is a pretty routine affair. Brian Garfield, Western guru, says, “The usual formula is played out in the usual way - nothing very interesting.” And as in 99% of the cases, Mr. G. is on the button.
Oh, and by the way, God's Country is actually New Mexico.