Predictable but just about watchable

Lone Rider is another of those made-for-TV Western movies that have become popular. I am glad they have. Although many are pretty ordinary, and are usually the dreaded ‘family entertainment’, at least people are making Westerns! It shows that there’s life in the old dog yet. People still like Westerns. I met a man this very day, here in my remote French village, who is passionate about the West and is building a Concord stagecoach! See? 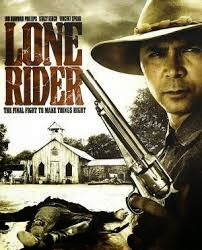 TV Western but watchable
Lone riders are an essentially Western trope. I have discoursed elsewhere (here, in fact) on the concept of 'loneness' in the Western movie. The lone rider in question today is Lou Diamond Phillips, although in fact he doesn’t really do much lone riding in the film. As we learn from his introductory voiceover letter, rather charming in its Victorian language, he is a soldier returning (alone) to his town. We guess already (we have seen too many Westerns) that he will find the town treed by a rich ruthless type, perhaps an ex-buddy, and he will be reluctant (having seen so much violence in the war) but will eventually fight for right and topple the tyrant.


Mr. Phillips is of Spanish, Scotch/Irish, Chinese, Filipino, Hawaiian, and Cherokee ancestry, which is probably why he plays a Cheyenne in Longmire. He first rode the range as Jose Chavez y Chavez in Young Guns in 1988, then in Young Guns II two years later. In 2004 he was in the rather turgid TV movie The Trail to Hope Rose, directed by David S Cass Sr. and in 2008 Mr. Cass got him back to do the much better Lone Rider.

Lou Diamond Phillips
His dad in the movie is Stacy Keach. Two years before, Mr. Keach had been in yet another David Cass TV Western, Desolation Canyon and had appeared in two other TV oaters as well. But we remember him most, of course, as Frank James in the 1980 film he co-wrote and co-produced, The Long Riders, and as Doc Holliday in the rather revisionist Doc in 1971. You might also recall him as the splendidly villainous Bad Bob in The Life and Times of Judge Roy Bean. In Lone Rider he is a store keeper being forced out of business (until son Lou goes into action) by the wicked Stu Croker (Vincent Spano). 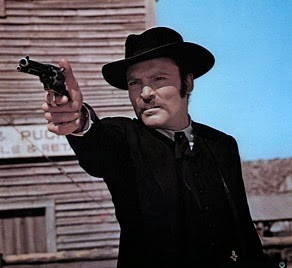 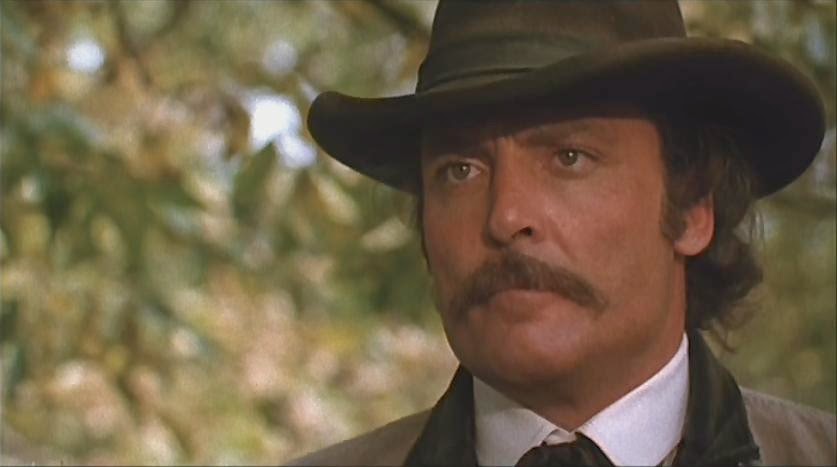 Stacy as Frank
Stu first welcomes his old pal Lou and is friendly as anything, but we know right off that this will soon change. He is Ruthless and wants to Own The Town. He has, as tradition dictates, the law in his pocket. The old sheriff Gus is Timothy Bottoms (who doesn’t really do Westerns) and he won’t do anything to stop Stu. But, as tradition also dictates, we wonder if the worm will turn and the bought-and-paid-for marshal will finally rise up and resist.


All pretty predictable so far. And of course there has to be, equally predictably, a girl for the hero to fall for. It’s the dusky beauty Serena (Angela Alvarado) whom Lou daringly invites on a picnic. There has to be another girl, too, usually rather more louche, so that we wonder which dame the hero will go for (though we are rarely in doubt). This is Constance (Cynthia Preston), Lou’s ex before he went off to the war, but she has now married Stu. She’s unhappy, though, and drinks. Well, who wouldn’t, with Stu Croker as hubby? 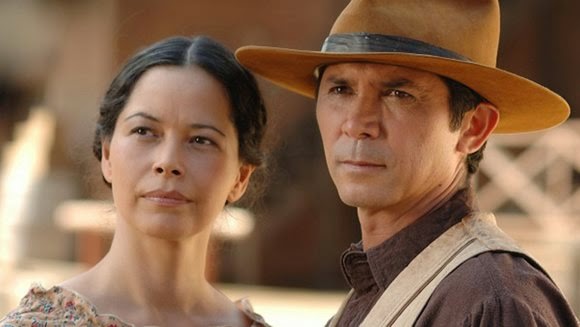 
The whole show only really livens up when Lou’s old army buddy Mike (Tom Schanley) turns up and they decide to apply military strategy and tactics to tyrant-toppling. There’s a good bit where they rob, then blow up Stu’s saloon, the Oasis. Then badman Stu and his two henchpersons hire four other guns so, hoorah, the badmen number 7, as is only right and proper. 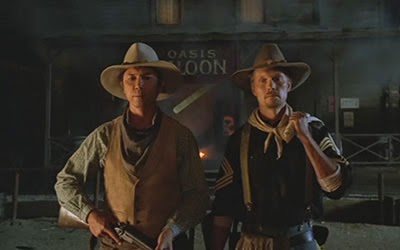 Applying military tactics to toppling a petty tyrant
My lips are sealed as to the outcome. Oh, alright, then, they aren’t. You know anyway that Lou will defeat Stu, choose Serena and become sheriff, with Mike as his deputy.


There’s an amusing last line, though, with a tongue-in-cheek reference to the Lone Ranger.


This Western will never set the prairie on fire and there isn’t even a derringer in it. Still, Mr. Phillips is OK and it’s nice to see Stacy again.