Deeply silly but a whole lot of fun

While Hollywood was experimenting with darker or more adult Westerns in 1950, like Broken Arrow or Winchester ‘73, studios were equally happy to continue with popular light-hearted oaters with a splash of song and dance, such as A Ticket to Tomahawk. And it’s still a lot of fun today. 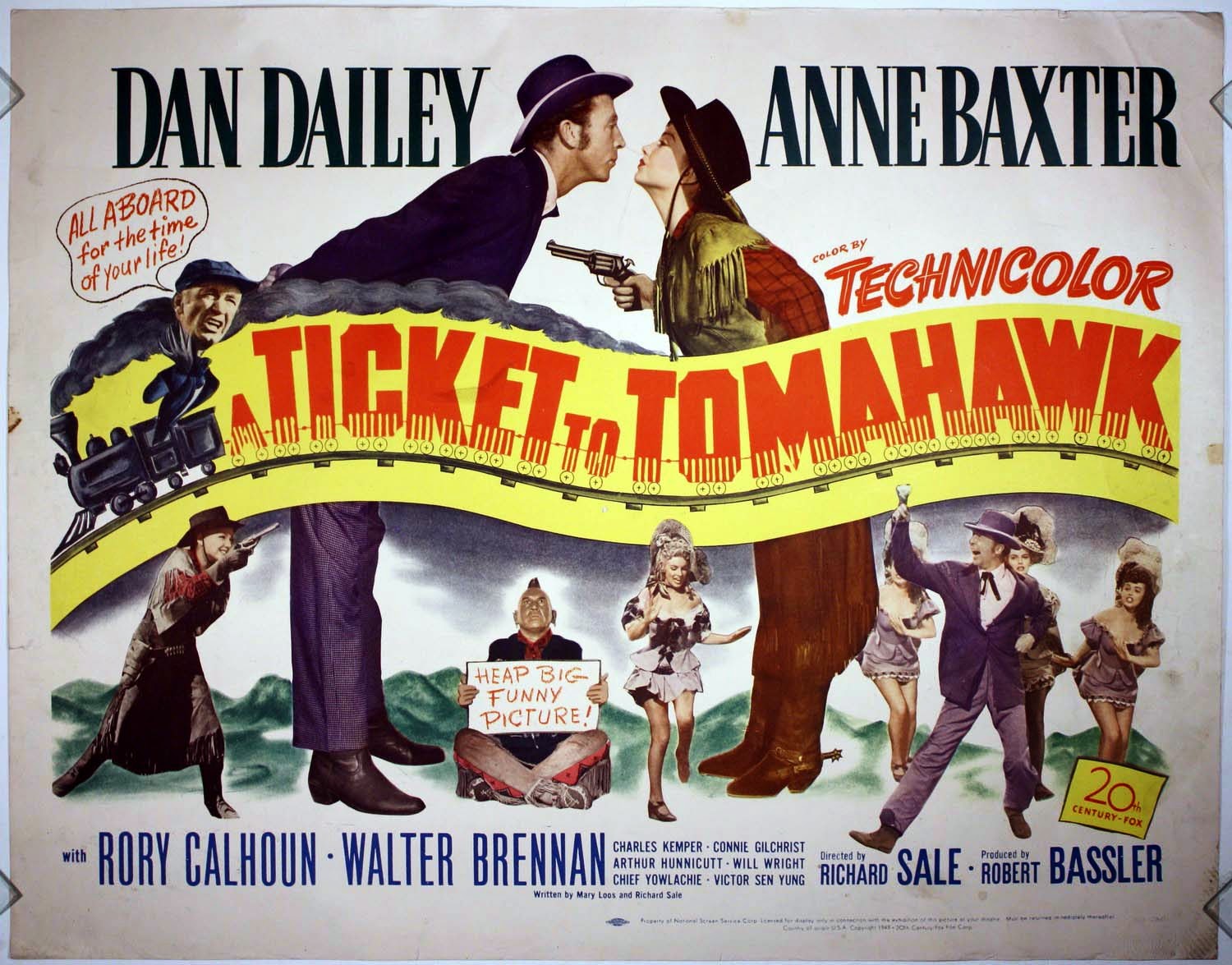 Silly but fun
Fox threw budget at it and wantede to make it a big picture. In fact it was slated for John Ford to direct but the studio was a bit cross with Ford at the time and yanked it, handing it to writer/producer Richard Sale  instead. It’s shot (by Harry Jackson, who had been a lowly cameraman on both Cimarron in 1931 and Western Union in ’41) in nice Technicolor in handsome Colorado locations. You will immediately recognize the Royal Gorge (it’s a railroad story) with Silverton standing in as the town of Epitaph, and the town of Tomahawk too.


It features former vaudeville star, the New Yorker Dan Dailey in his only big-screen Western. He doesn’t do badly as Johnny Behind-the-Deuces. The real Johnny Behind-the-Deuces, you will remember, was the gambler Michael O’Rourke who, legend has it, after killing a man in a card game, was saved from lynching by the Earps in Tombstone in 1881. Johnny was escorted to Tucson jail but escaped and never stood trial for the murder. It didn’t do him much good, though, because the year after in Sulphur Springs Valley he killed another man in a card game and was himself shot and killed in a subsequent gunfight, possibly by Pony Diehl, a pal of Johnny Ringo’s. In A Ticket to Tomahawk, though, Johnny just appears to be a drummer with a way with cards and rather light of foot. He has a good bit with a derringer in a derby. 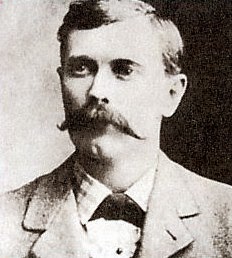 Photograph said to be a likeness of the real 'Johnny Behind-the-Deuces', Mike O'Rourke
Opposite him, as the Calamity-ish feisty gal who is good with a shootin’ iron, is Anne Baxter. Ms. Baxter (a granddaughter of Frank Lloyd Wright) had started in Westerns with a smallish part in a Wallace Beery effort, 20 Mule Team, in 1940 but had got her first female lead role in an oater opposite Gregory Peck in the excellent noir Yellow Sky in 1948. Later, she would do The Outcasts of Poker Flat, The Spoilers and Three Violent People and later still the 1960 remake of Cimarron with Glenn Ford. These were all straight dramatic parts and Tomahawk was a bit of a departure for her. 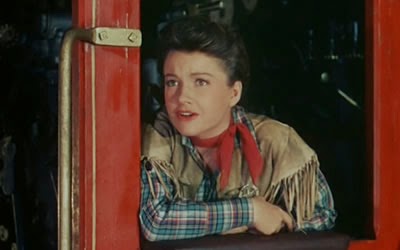 La Baxter in lighter vein
Her name is Kit Dodge Jr., and Kit Dodge Sr. is good old Will Wright as the US marshal, who deputizes her. Mr. Wright, one of those eternally old men (though he was only 68 when he died after a long career) was in over 100 big-screen and TV Westerns, from 1941 to 1962. 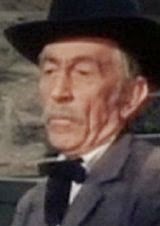 Good old Will Wright as the marshal
I remember him especially from Whispering Smith, Vengeance Valley and Gunman’s Walk but he popped up in pretty well every Western TV show you care to name at one time or another.

Chief Yowlachie
In smaller parts we have Chief Yowlachie in a corporal’s jacket as the (almost) mute Pawnee (he has three words to say at the very end, “I couldn’t say”) and Arthur Hunnicutt, another favorite of mine, as the fireman on the locomotive, Sad Eyes.

Hunnicutt as fireman...
His boss, the engineer, is Walter Brennan, doing an unusually non-old timer act but hamming up the crankiness part. 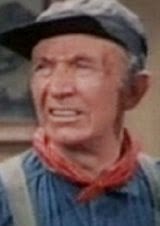 ...and Brennan as engineer
Jack Elam is an uncredited henchman (naturally he gets shot) and there’s even a young Marilyn Monroe as one of the saloon gals. 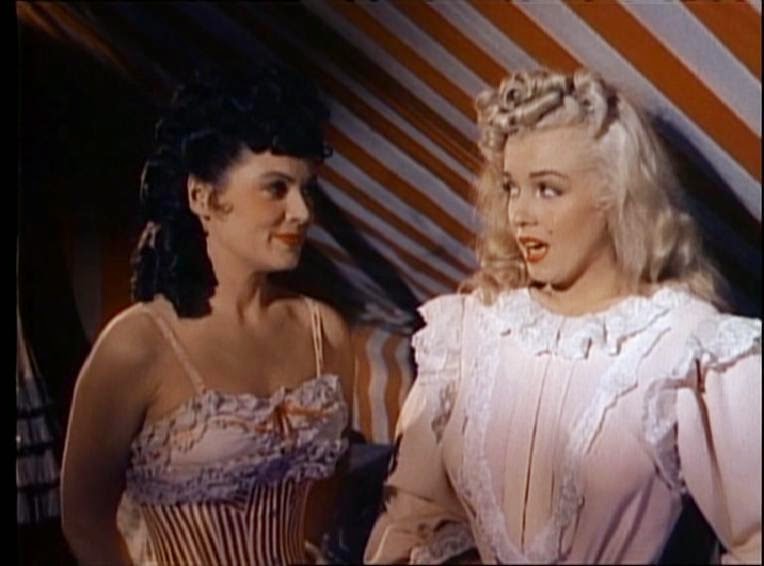 Marilyn in an early bit part
The chief heavy, Dakota, is played by Rory Calhoun, having fun. He says that “Wild Bill Hickok taught me” to shoot and he adds that he was “one of Wild Bill’s deputies in Deadwood,” as if Bill was ever marshal there. Dakota’s boss is the usual obligatory villain in a suit, Colonel Dawson (Mauitz Hugo) but it’s a small part. He owns a stage line and wants gunman Rory to make sure the railroad fails - a well worn plot line, that. It was Rory's third Western and doubtless he was hoping now to hit the big time being cast in A-pictures. 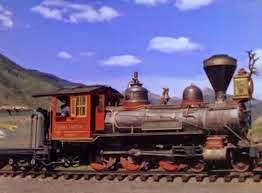 Said to weigh 33 tons, yet mules tow it over soft ground...
It must be a very light locomotive because in the absence of rails they pull it over soft ground with a mule team. Not very plausible, I fear, but since when have we demanded plausibility from our Western movies? The blowing up of the trestle is spectacular and well done.


There are fearsome Arapahos to combat as well as the bad guys.


The New York Times said, correctly, that it was "a pretty good show." The whole thing is deeply silly but quite a lot of fun and I can recommend it.