Duke, Gabby, Yak, what more do you want?

In Westerns there was a man from everywhere. Everywhere in the West, that is. One thinks principally, of course, of The Man from Laramie, but let us not neglect those men from Arizona, Bitter Ridge, Button Willow, Colorado, Dakota, Del Rio, Galveston, Monterey, Nevada, New Mexico, Oklahoma, Sundown, Texas, Wyoming, the Alamo and the Tumbleweeds, to name but a few. Yup, Hollywood sure liked the man from… titles. And firmly in the category is the 1930s Monogram programmer with John Wayne, The Man from Utah. 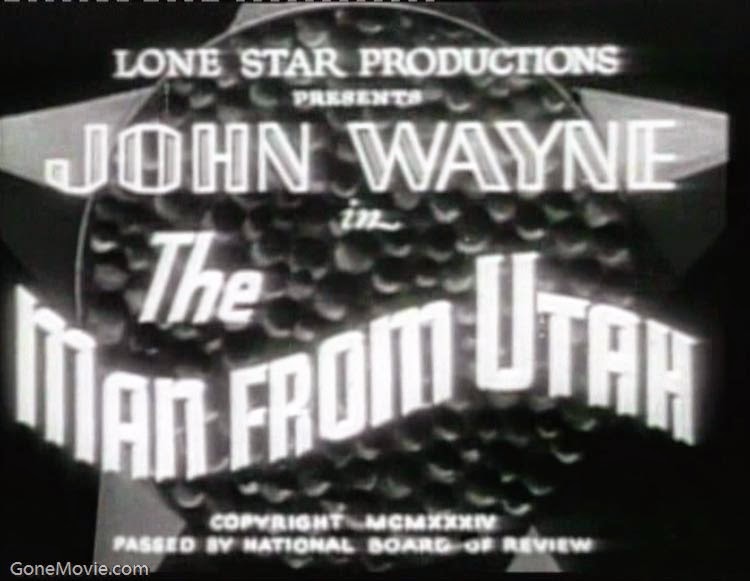 A classic of the genre. I guess.
John Wayne’s career was at the following point: as a prop boy he had been an uncredited extra in two Westerns (1926 and 1930), had then starred for Raoul Walsh in 1930 in The Big Trail, had then slipped back into obscurity, took lower billing on three appallingly bad Westerns for Harry Cohn at Columbia in 1931/32, swore he would never work for Cohn again, made six really quite nice little Westerns for Warners 1932/33 (one of them another Man from title), and then started on his career with Lone Star/Monogram which lasted till the demise of the studio in 1935; he then continued with the employers under their new guise of Republic, which lasted till 1949 when he made his last Republic Western, The Fighting Kentuckian. The Man from Utah was the sixth of nine Monogram oaters he made in 1934 alone.


All of the Monogram pictures were, it must be said, formulaic and very corny by today’s standards (and perhaps even by 30s standards too). We have already reviewed Paradise Canyon, The Dawn Rider, The Desert Trail, Texas Terror, 'Neath the Arizona Skies, The Star Packer, Randy Rides Alone and Blue Steel, and honestly, if you read all those reviews you are going to risk a bit of repetition. And if you actually see all the movies, you’re going to get even more repetition.


Still, it must also be said that they are a whole lot of fun and if you do watch them you’ll pass a pleasant few hours. They are all black & white, last roughly an hour and often had actors who were part of a ‘stock company’ and so become very recognizable as the series progresses. The Man from Utah is no exception.


It’s a rodeo picture and you can ask whether rodeo films are true Westerns. Some aren’t, really, because of their modern setting and/or because the themes they deal with aren’t very ‘Western’ in the true sense. Still, they are often highly enjoyable and some of them (The Lusty Men, Junior Bonner, others) are works of art. The Man from Utah could not, sadly, be put in this work-of-art category. But it is, nominally, set in the old West, with cowboys sporting shootin’ irons on their hips and classic Western skullduggery going on. I say ‘nominally’ because you occasionally glimpse an automobile or modern telegraph lines and so on (and on one occasion a sign announcing an event in 1932) but it doesn’t matter in the least. In any case old Westerns had no complexes about mixing the ancient and the modern and Tom Mix oaters, for example, are full of planes and cars. The leading ladies always wore 1930s dresses and frizzy hairdos. 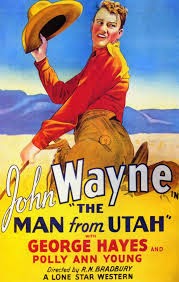 Amusing poster
It’s set in Nevada (though shot in California and the rodeo footage comes from Calgary).


Anyway, we’ve got RN Bradbury in the director’s chair (‘Robert Bradbury’ he is billed as, which sounds grander somehow), his 72nd Western (he had directed his first in 1918!). Robert was Bob Steele’s dad and often starred the boy in his oaters, though not, sadly, in Utah.


Gabby Hayes is also there, of course, though no ‘Gabby’ is mentioned; he is grandly billed as ‘George Hayes’. He is the marshal, a rather hillbilly one, and Duke is his deputy (he’s ‘John Weston’ this time, geddit?). 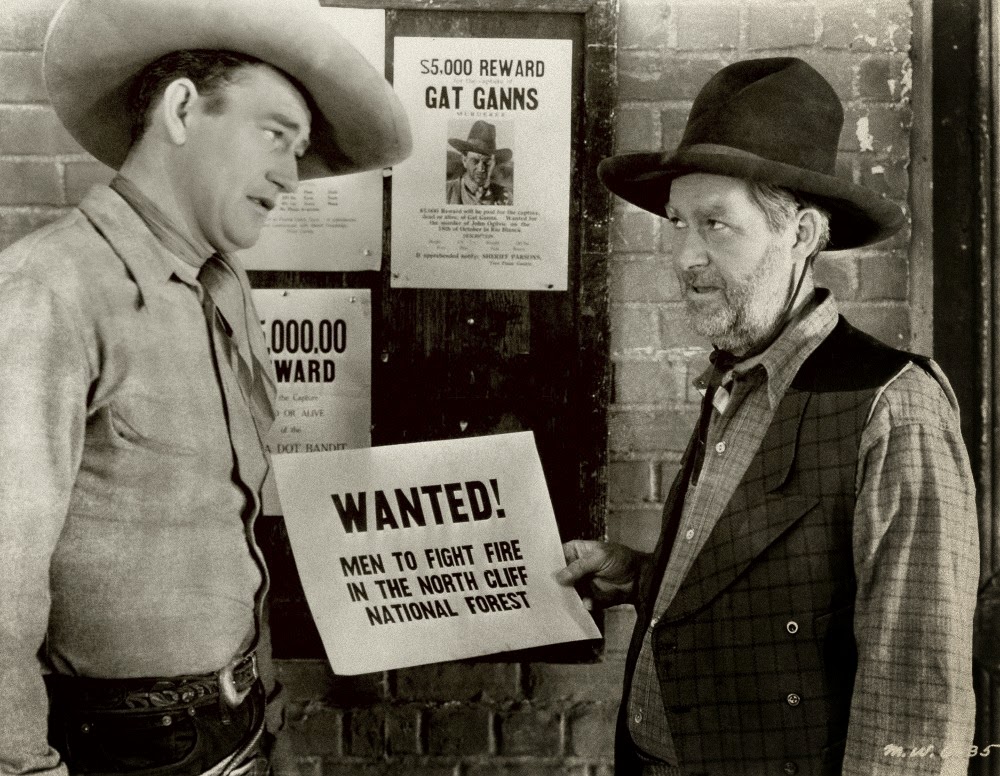 
And naturally Duke’s pal Yak Canutt is there as the bad guy Cheyenne Kent and supervising the stunts. Best of all, for me, is the fact that the rodeo announcer is Earl Dwire, my hero. He usually has an old Western megaphone to shout through but occasionally they forgot that and he has a modern microphone. Oops. 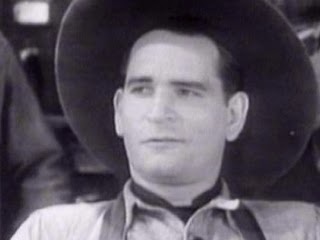 Yak is the bad guy Cheyenne

There’s mucho galloping (often with speeded-up film), and rootin', tootin' and, of course, shootin', and the ‘acting’ is, as usual, dire. They stand to attention, shout the lines they have learned (or read them off cards) and then wait motionless for their next cue. The writing (Lindsley Parsons, as so often) is so pedestrian that actually even if the cast were Laurence Olivier and Meryl Streep they’d still be no good.

Actually, I'd rather like to see Olivier and Streep in a Western. Dream on.


There’s some dynamite at the end and a river and a kiss. At one point Duke sits on a white horse and croons (or lip-syncs anyway) to the sound of his guitar.


Well, I enjoyed it anyway.