The thrilling days of yesteryear

Western comics are almost extinct. There was a time when every screen cowboy had his accompanying comic books, avidly bought by (mostly) small boy fans. This was especially true during the height of the 1960s TV Western when newsstands were covered with cowboy comic heroes.

As the TV and big-screen Western became rarer, so did the paper versions. Many of them were anyway pretty bad. Usually they had deceptively colored and glossy covers masking (literally in the case of the Lone Ranger) pretty crude black & white line-drawing interiors. They were often poorly drawn and clunkily written.


But in the case of the masked man anyway, Western comics are back. And they are good. Aimed at an older public than before and darker in tone, Dynamite’s Lone Ranger series, now collected in paperback book format, make rather a good read. My favorite nephew (alright, I’ll admit to only having one, still he is my favorite) gave me the volume with the first six comics collected together, for Christmas. Kind and perceptive fellow.


Written by Brett Matthews and drawn by Sergio Cariello, with colorist Dean White, letterer Simon Bowland (some of the letters are too small, Mr. Bowland) and Art Director John Cassaday also credited, The Lone Ranger, Volume 1: Now and Forever makes essential reading for us Rangeristas. If you haven’t already got the comics. 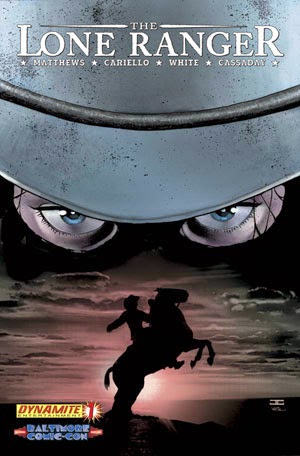 Darker
The series doubtless enjoys the enhanced popularity gained by the big 2013 Disney movie with Johnny Depp, but of course the comics came first.


The volume tells the founding myth of the origins of the Lone Ranger, rather like the 1949 pilot movie or the 1981 remake. It sticks, by and large, to the established legend of John Reid and the murderous ambush, Tonto finding the half-dead ranger and how they joined forces to foil the dastardly Butch Cavendish, but there are slightly new interpretations of the tale; it has some originality and is not a stale rehearsal.


It begins with quite a few back-to-the-future displacements in time – flashbacks in other words – as we flit back and forth from Reid’s childhood to the ambush to ‘the present’ (1870s?). There are a good series of frames where the boy sits on a stump and slowly works out a philosophical truth. In fact the father/son relationship is skillfully drawn. Then, “one year ago”, we see a besuited young Reid coming back from an education back East; he pals up with his Texas Ranger brother, a devoted user of the “hi-yo” call.


The famous ambush is graphically drawn and the frame showing the Cavendish henchman who is about to finish John off shot through the throat by an arrow from Tonto is pretty grisly, though the henchperson’s cry is rendered as “HRRRKKK”, which will please comic readers. Tonto’s first word to Reid is, amusingly, “How”, which, however, on the following page turns out to be the start of the question, “How are you still alive?”


There’s a sinister character, Julius Bartholomew, who gives a new meaning to the name Black Bart. His behavior is not for young children readers. Tonto digs the graves for the dead rangers, including a false one for John, but the ruse doesn’t work… 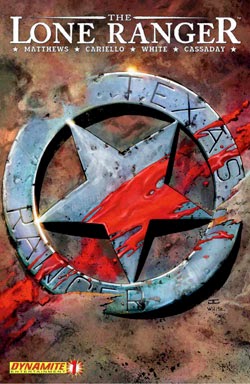 Plenty of gore
The first silver bullet comes from a melted down Texas Rangers’ badge. Reid buys the equine Silver despite the warning from the trader that “he won’t break”. Silver has an almost human face. We get the silver mine, with enough ore for a ton of bullets. The Ranger dons an at first ragged and rather frightening, then a neater mask. He and Tonto set off on their quest to hunt down Butch and then Right Wrongs.


The story observes the conventions, therefore, but puts a harder, tougher cast on it. It can be read ‘straight’ and it is true to the spirit of the classic hero but it is not really suitable for the younger reader. Occasionally it verges on the frightening and some scenes are bloody and violent, although the Ranger properly avoids shooting people. Both the masked man and his sidekick are toughly depicted. 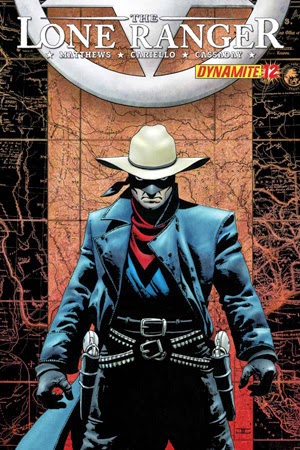 No Clayton Moore
Tonto, especially, is quite fearsome at times and he is certainly not the menial factotum of the TV series. He doesn’t obediently answer “Me do” when given the dirty work to do. If anything, he’s almost the boss.


The tale is told in a clearly cinematic way, but is none the worse for that. You might get a series of five pictures on the same page, all almost identical, showing the same character sitting and musing. Mr. Cariello is an artist of considerable talent and the vignettes are finely drawn.


A nice feature of the book version is the addition of sketches and character designs, with a few comments, at the end.


Dynamite has another, later Lone Ranger series but it isn’t as good so if you are interested, make sure you get the Matthews/Cariello one.
Posted by Jeff Arnold's West at 10:00 AM