A paleface (and redhead) Cherokee

Credit to early-1950s Hollywood for making a Western movie about a woman but of course the central character couldn’t receive top billing. She was only a female after all. So the wooden Jack Buetel was placed at the top of the cast list. He acts (if that’s the right word) the role of Marshal Hollister, destined, we know from the opening of the first reel, to woo and win the fair heroine. The top billing should have gone to Mala Powers, the eponymous Rose. 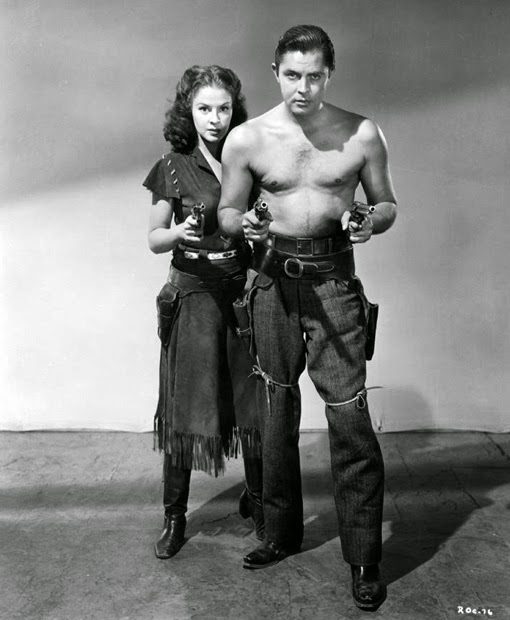 These 50s publicity stills are hilarious sometimes
The beautiful Ms. Powers is known as the queen of B sci-fi flicks but in fact she had a promising start to her career before illness intervened. She was a protégée of the great Ida Lupino who auditioned and approved her for the female lead role in The Outrage (a role which eventually went to Claire Bloom). Rose of Cimarron was Mala’s first Western and she’s really rather good in it, despite the rather clunky script and direction. Later, she was a regular of TV Western shows.


We start when some Indians attack a wagon train in a studio (though we only see one wagon, budget constraints being what they were). A mother hides a baby in a trunk and is then killed, along with all the other whites. An Indian finds the orphan and raises the infant as his own daughter. This noble Cherokee, Lone Eagle, is none other than good old Monte Blue, born in 1887 and veteran of Westerns ever since Martyrs of the Alamo in 1915. He is murdered though, along with Rose’s adopted mum, by some evil bad guys. Rose sure loses parents at a rate of knots.

At least they didn't make Belle Starr Rose's mother, as they did in Belle Starr's Daughter.


Rose grows up as a rather improbable Cherokee girl, riding astride in buckskin pants with a rifle and two-Colt gunbelt and huntin’ and shootin’ with her bro, Willie Whitewater, played by none other than Jim Davis, with enough Brylcreem on his head to keep the company afloat for years. 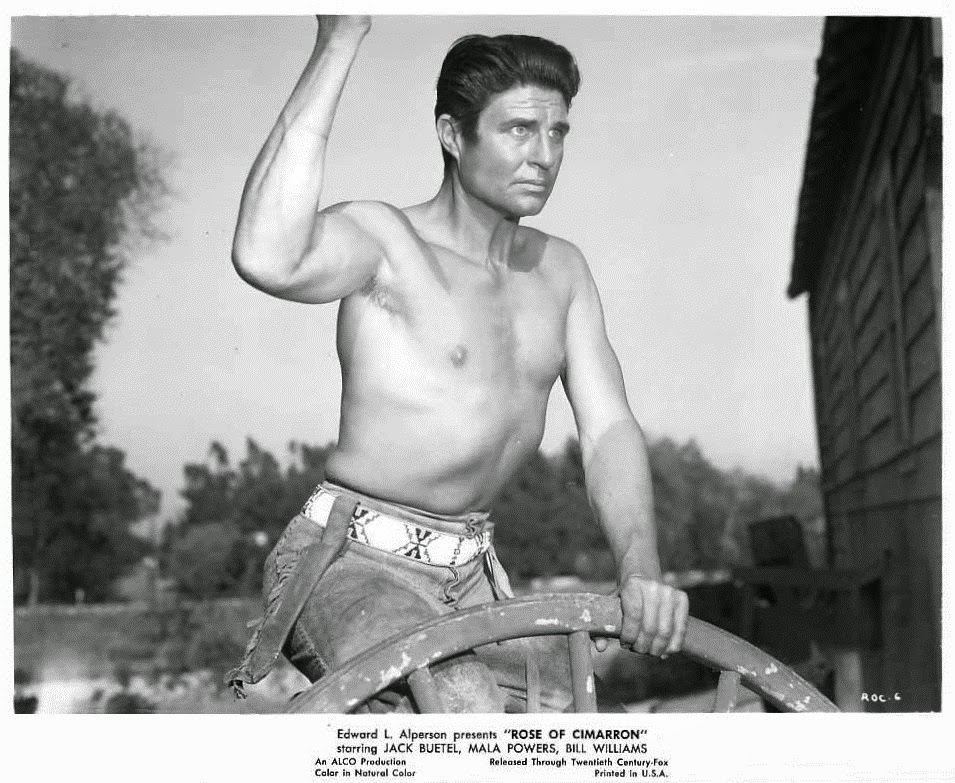 Must have had shares in Brylcreem
Rose also has rather coiffed 50s hair and make-up. Jim becomes a Tonto-esque sidekick to Rose. Rose speaks strangely good English for one who has been all her life with the Cherokee. 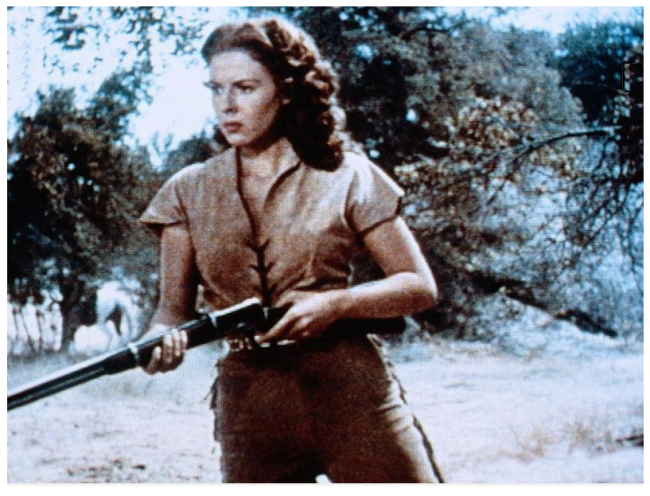 Tight buckskin pants for the Cherokee maid
After the murder of Rose’s Indian mum and dad, she and Willie go off to Dodge and the rest of the movie takes place there. Of course Rose wants to find the villains who shot down Mr. and Mrs. Lone Eagle, and Dodge is as likely a town as any to find them. Sadly, there’s no Masterson or Earp in Dodge, only Jack Buetel.


Bill Williams is George (not Bittercreek) Newcomb, a rather good baddy in black. Brooklyn-born ex-professional athlete Williams had been a stalwart of Westerns since the mid-1940s and was to become very well known on the small screen in pretty well every Western TV show you could name. You may also remember him as the sheriff in Rio Lobo. 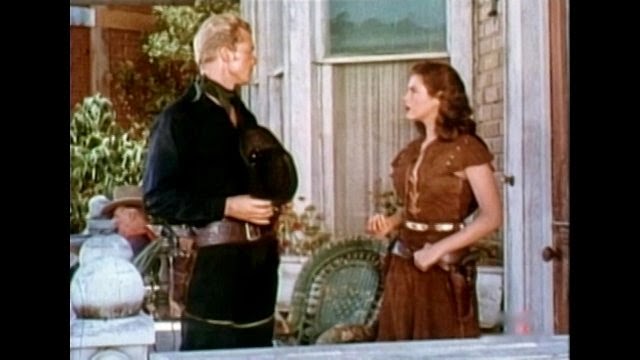 Bill is backed up by other henchmen, notably Art Smith as the old rogue Deacon and the great Bob Steele doing his usual splendid badman act as Rio. An instantly recognizable John Doucette is another henchperson.


The main weakness is poor Jack Buetel, though, as the marshal who tries to do the right thing and imprisons Rose for shooting a villain or two (it’s the Cherokee way, she informs him). 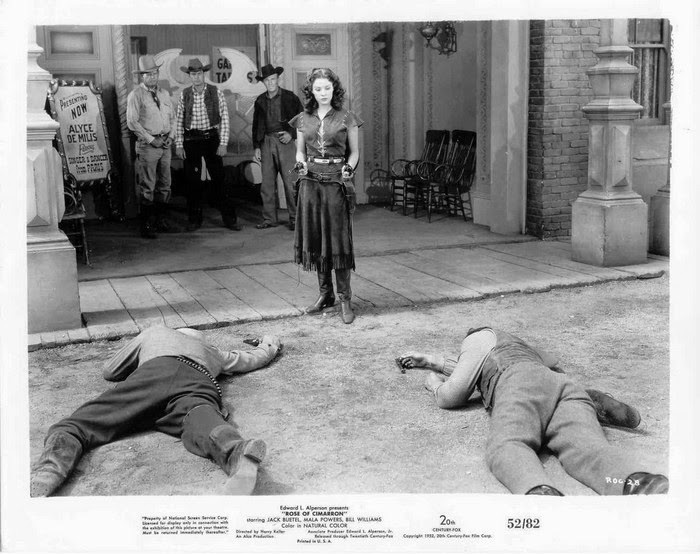 The Cherokee way
But of course he loves her and eventually, together, they right the wrongs, you know how they do. Mr. Buetel (1915 – 1989) famously played Billy the Kid opposite Jane Russell in the dreadful The Outlaw (released 1943), he was third-billed in Best of the Badmen, and Rose was his first Western starring role. He was a lousy Frank James in Jesse James’ Women in ’54 and then became Edgar Buchanan’s sidekick Jeff in Judge Roy Bean on TV. In an acting competition between Jack and a block of wood, Jack, to be fair, would probably win.
Well, Rose of Cimarron is an undistinguished B-Western really but I have seen a lot worse. I've given it two revolvers (it probably only deserved one) for Bob Steele and Jim Davis's hair. 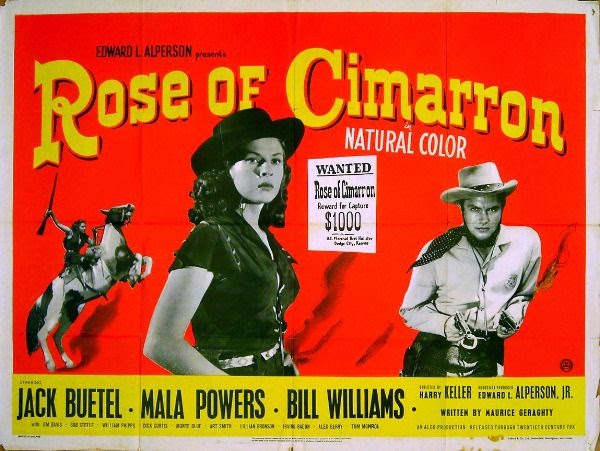 No relation to the 70s Rusty Young song.