Mark Stevens was a sort of poor man’s John Payne. And John Payne was already a kind of poor man’s everyone else. Put more kindly, Stevens was not in the very top rank of Western stars. Born in 1916-ish (no one is quite sure), he was in his early 40s at the time of this movie, though looked older. He was never an especially imposing or handsome lead. He did have the excellent Forrest Tucker to back him up as his brother in this movie but sadly Tucker is written out of the whole middle part of the film. It would have been better with Tucker as the central character and Stevens backing him up. Stevens did have some Western credentials: he directed quite a few Wagon Train episodes. He’d first appeared as a Western actor in Roaring Guns, a B of 1944, and his first lead in an oater was the 1949 Louis King-directed Sand. He best Western was certainly a minor but intense B of 1953, Jack Slade. But all in all Stevens was probably better in minor noirs. And his cowboy hat was too small. 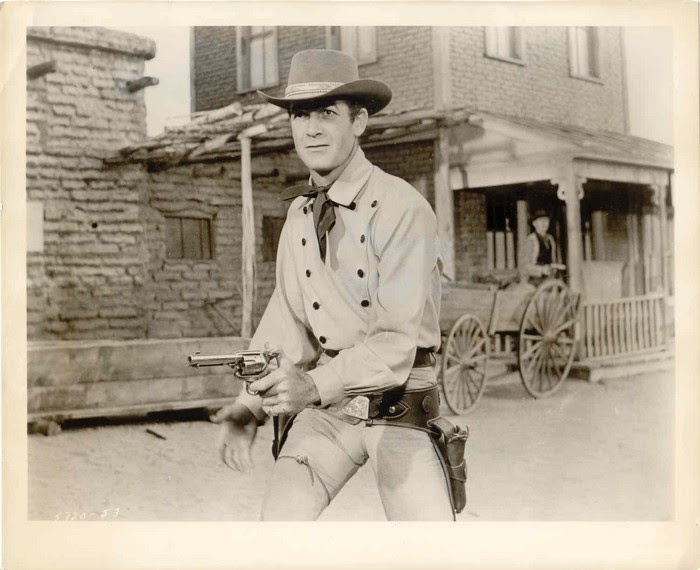 Mark Stevens in his Blue Chip gear
Gunsmoke in Tucson is a pretty run-of-the mill Allied Artists film of the 1950s. It doesn’t stand out. Still, it’s nicely shot in Arizona locations (appropriately in and around Old Tucson) in CinemaScope and the color print is of good quality. It’s no junk poverty row studio knock-off. It was directed by Thomas Carr, who had started as a child actor in silent movies and graduated to directing B features and, later, TV shows. Westerns were his main thing. He was actually a rail worker in The Iron Horse (but then who wasn’t?) and appeared in several other oaters in the 30s. His first Western as director was in 1945, Rough Riders of Cheyenne, a Sunset Carson epic, and he made five more with Carson in 1945 alone and five in 1946. He helmed many second-feature Westerns in the 50s (often with James Ellison) and moved early into TV oaters with The Adventures of Wild Bill Hickok series from ’51 on. Later he specialized in Trackdown, Wanted: Dead or Alive, Stagecoach West and, in the 60s, Rawhide.


Gunsmoke in Tucson (rather a good title) starts with a lynching. I always hate lynchings, even Hollywood ones. The lynchee’s two sons are forced to watch their pappy being strung up. One brother, John, disavows his dead dad, takes another surname (Brazos) and grows up to be Forrest Tucker, a rather pompous US marshal. The other, Jedediah, the wild one, becomes known as Chip, grows up to be Mark Stevens and leads a band of outlaws, the Blue Chip gang. This is an old one, of course, the 'two brothers, one on each side of the law' plot. Well, don’t fix it if it ain’t broke. 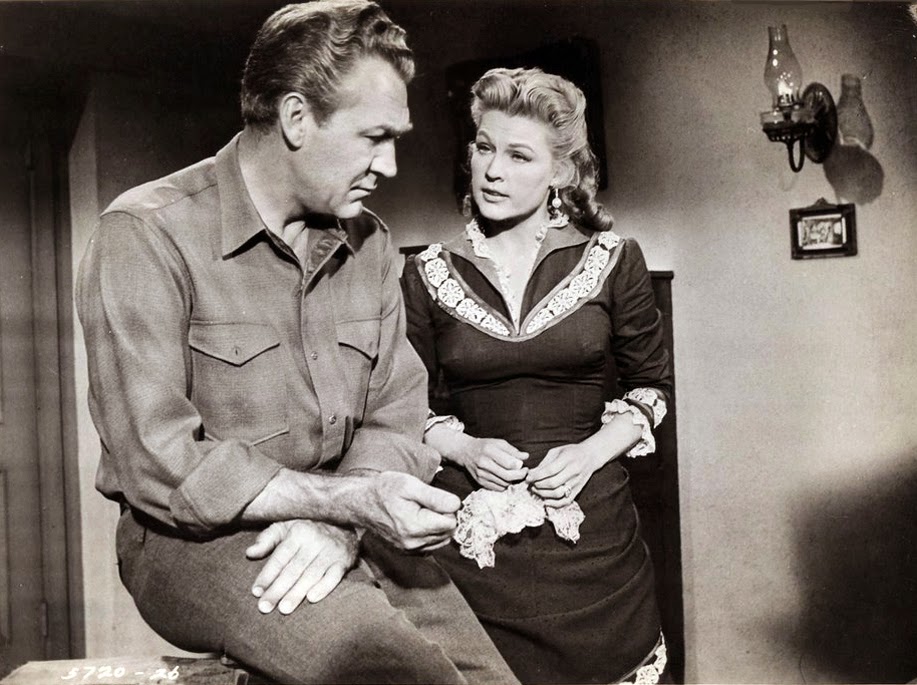 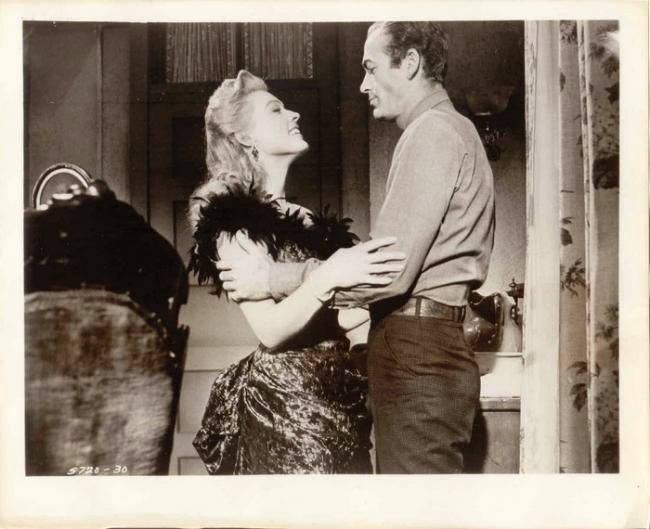 Gale Robbins plays the racier saloon gal, Lou
The best thing is that the big rancher villain (it’s a rancher vs. honest homesteader plot too) is Vaughn Taylor. I always like Vaughn. Normally he’s just a pusillanimous townsman and he looked like an accountant. Partly that’s because before appearing in Westerns, he was an accountant. But here he’s been promoted to arch-badman and he does an excellent job, I must say, with the sneering and evil plotting. He did huge numbers of TV Westerns. His first big-screen one was as Mr. Baldwin in the Scott/Boetticher Decision at Sundown in 1957, and then he was good as the hotel manager in Cowboy the year after. Gunsmoke in Tucson was only his third big-screen oater. Townsman in Warlock and The Plunderers, banker in The Professionals, you’ll often spot him, in a suit, arching his eyebrows. 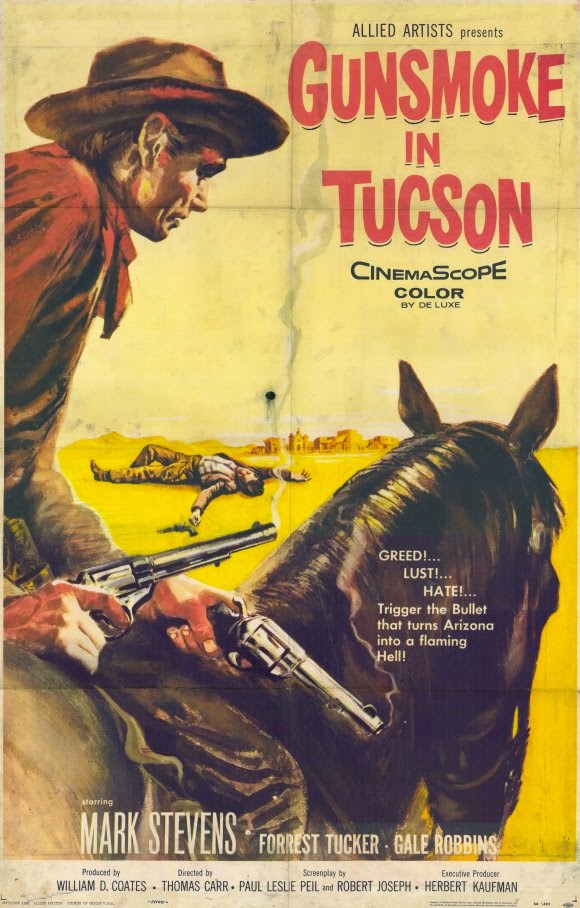 Nice poster
There’s some business about evil rancher Vaughn wanting to get his hands on the Chisum ranch (oddly, in Arizona). Chisum (who turns out to be spelt Chissum) is dead and his spread auctioned off. The honest homesteaders (led by a sanctimonious bible-quoting Kevin Hagen) need it but Vaughn wants it, and Vaughn has any number of gunslingers on his payroll, one of them the sheriff. Ex-bandit Jed/Chip wants to keep out of it. He has served his time in prison and is now trying to go straight. But of course he is drawn into the range war, as we knew he would be. Vaughn cleverly blackens Chip's name by getting one of his henchpersons to dress up as Blue Chip and maraud. It doesn’t work though.


Well, well. It’s no great shakes. But it’s not too bad either and if it came on TV you could watch it, though I’m not sure I’d splash out on a DVD.