How Hollywood loved titles with the word guns in them. Of course the firearm, and especially the handgun, was an essential and integral part of the Western movie. Indeed, it is difficult to imagine a Western without them. I know of Westerns where no gun is actually fired (see the delightful Four Faces West, for example) but can’t think of one where no guns are present at all. 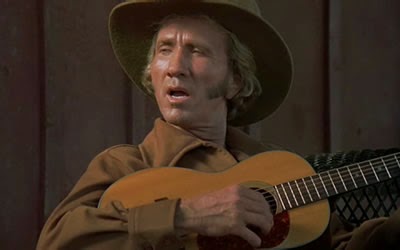 Marty does his thang
Anyway, Guns of a Stranger was a Marty Robbins effort (the film was made by Marty Robbins Enterprises and Marty produced and starred in it, as well as, obviously, doing the songs. His son Ronny is in it too). Robbins managed to get Chill Wills to co-star but sadly it was so badly written (Charles W Aldridge, his only Western movie) and directed (Robert Hinkle, who had directed three episodes of the TV series) that Chill has very little to say or do, and, even more tragically, he doesn’t sing (for he had a lovely voice). 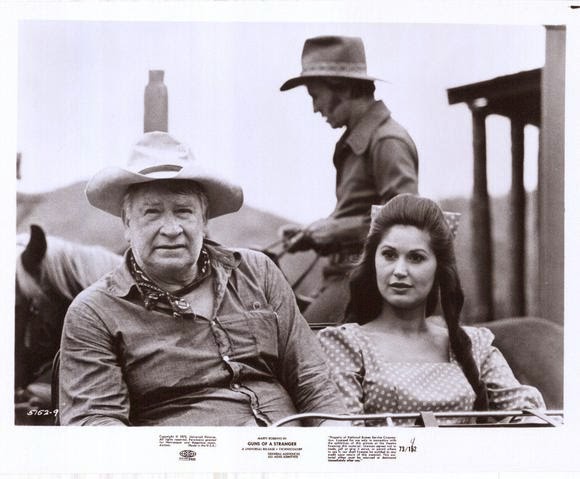 Chill is sadly wasted (I don't mean he was wasted, though of course he could have been)
The movie spun off from Marty’s 1965 TV series about a man who, er, drifts from place to place (as you know, in the West they couldn’t travel anywhere, they had to drift there). His sidekick Don Winters from the series is also in the movie, as Axe, and he is joined by stammerer Shug (Shug Fisher) and pard Bob (Bobby Sykes), to make, with Marty, a musical quartet. There’s a bit of business where Shug arrives with a large crate which contains, everyone is sure, a Gatling gun, but it’s a container for Bessie, Shug’s double bass. 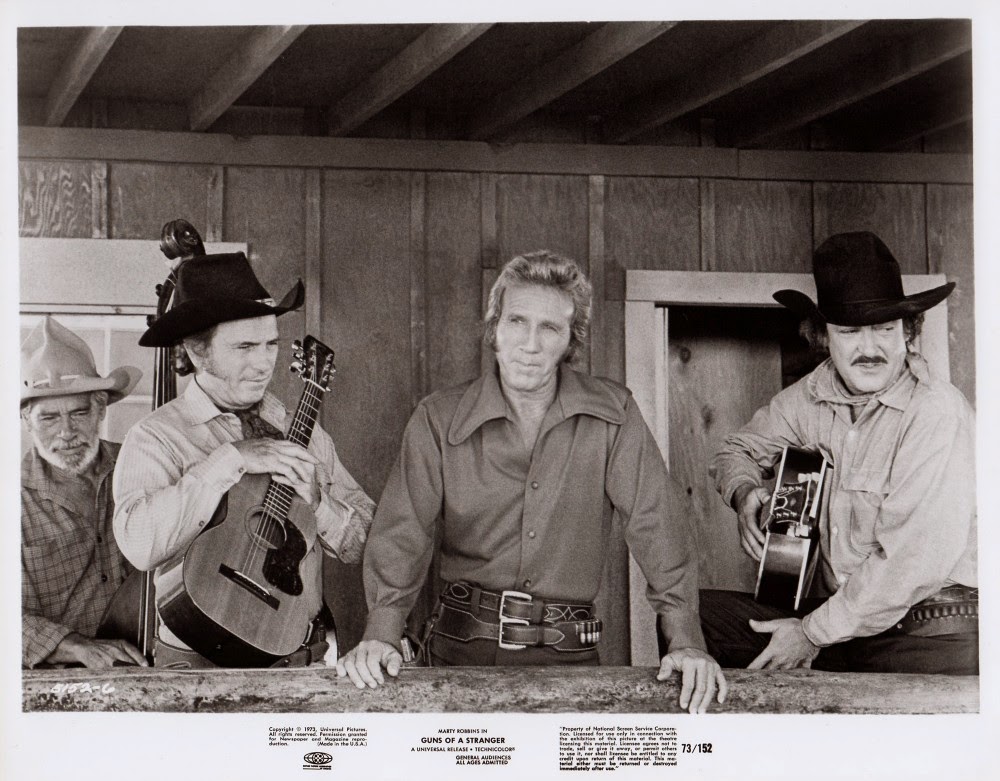 Shug, Bobby, Marty and Don. No barber shop in sight but they croon the tune.
It’s very much a musical Western. The first song (after the title ballad I’m The Drifter) comes about 20 minutes in and after that they happen pretty regularly. They aren’t bad, in that slightly hokey singing-Western way. They do try to have a ‘proper’ Western around them, with a plot and everything. Actually, Marty, though the good guy, pretty well murders people in cold blood. OK, they were badmen but he still bushwhacks them from hiding which isn’t very sporting.


We are in Arizona, 1876. Marty comes across a young boy, Danny (Steve Tackett) and they pal up. Danny’s principal task is repeatedly to urge Marty to sing and compliment him when he has done so. Chill is Danny’s grandfather, and Chill's granddaughter, the boy’s sis, is Virginia (Dovie Beams). Marty takes an even bigger shine to her. Sadly, she’s a lousy actress. In fact to be honest most of the cast are very wooden and recite the lines they have learned then wait, immobile, for their cues. The screenplay is pretty clunky too. It’s one of those movies where the actors explain the (hackneyed) plot to each other a lot. 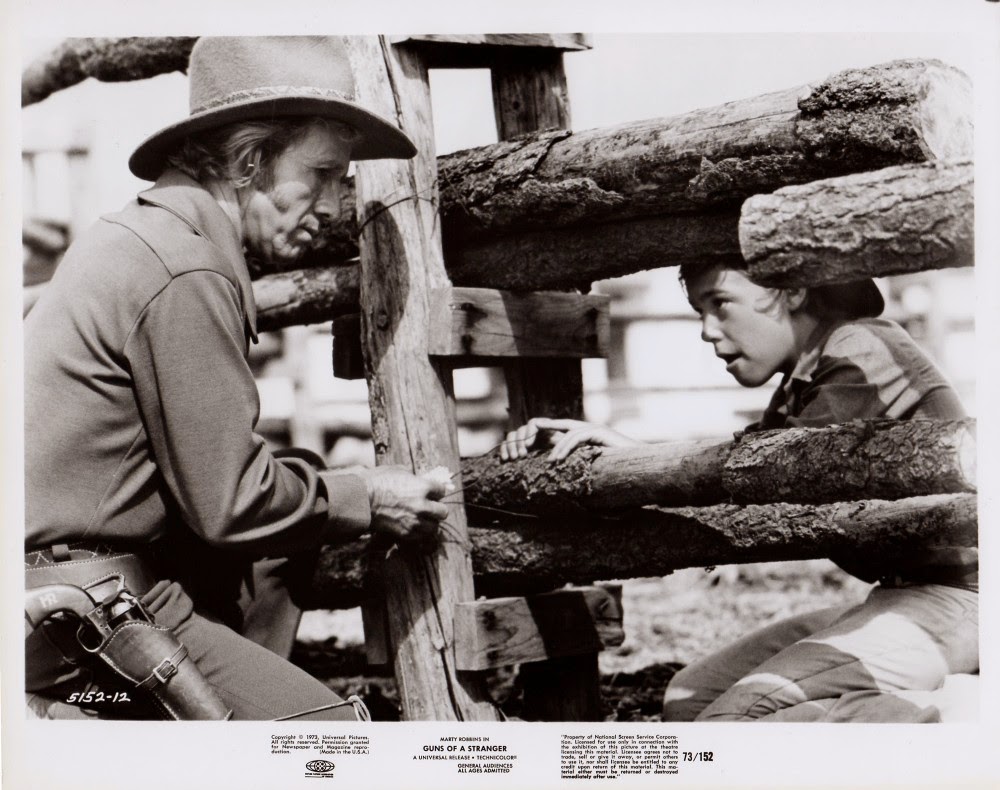 Drifter and impressionable lad get into adventures
There are bad guys, of course. Tom Hartman plays Harley Rutledge, a villainous banker in a suit straight out of any number of 1930s B-Westerns. It's one of those save-the-farm-from-the-crooked-banker plots. The banker's chief henchman Ace (you know he’s bad because he has a scar) is played by Bill Coontz. There are other, lesser henchpersons. The best bit of the movie is when the sneaky Ace provokes a showdown with the reluctant Marty (who is, of course, a lightning draw) and Ace has a derringer hidden in his kerchief. Typical slyness on the part of the badman. Of course it does him no good. 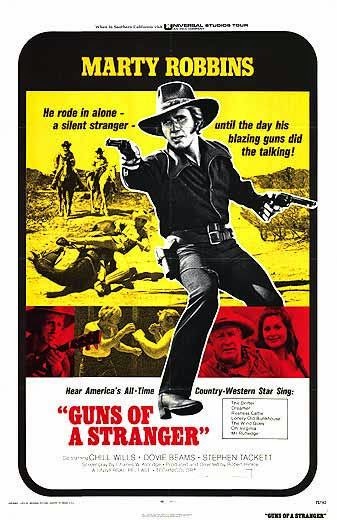 Missable
At the end, Marty decides not to grab the girl and wed but, yes, you guessed, to drift.


You could safely give this one a miss, e-pards, unless you are a dyed-in-the-wool Marty fan, that is. I've squeezed it up to a two-revolver rating in honor of Chill.