Sam Bass in fact and fiction

Sam Bass was born in Indiana, it was his native home
And at the age of seventeen, young Sam began to roam
Sam first came out to Texas, a cowboy for to be
A kinder-hearted fellow you seldom ever see


The legend of Sam Bass is pretty well known. Bass and John Wesley Hardin were the most famous outlaws of 1870s Texas. When Sam appeared on screen, such as in Calamity Jane and Sam Bass, when Howard Duff played him, it was preposterous twaddle historically and not very well done even from the point of view of Hollywood Westerns. So who was the real Sam Bass?


There are many photographs said to be a likeness of Sam Bass but none is 100% reliable. If the pictures are indeed Bass, he was a respectable-looking, mustachioed, gentlemanly figure, reasonably handsome and the type who would look you straight in the eye. 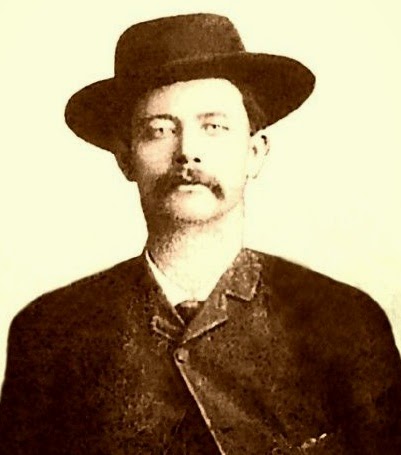 Straight in the eye
He was reported to be about five foot eight, about 140 pounds with black hair and a sallow skin. He apparently walked with a stoop and spoke with a nasal twang. We know he was born in Mitchell, Indiana on July 21, 1851.


His parents died young and Sam left Indiana in about 1869 (if the Shakespearean verse quoted above is to be believed).

A young Sam. Possibly.
But there are precious few details of his youth.


Like many a sporting Westerner, Bass liked racehorses and we first meet him properly in Denton, Texas, where he was a teamster but then acquired “the Denton Mare”, Jenny. Ridden by the slight black jockey Charlie Tucker, Jenny made Sam money, and in San Antonio he went into business with a shady saloon man named Joel Collins. They drove some cattle up into Kansas, then headed for Deadwood.


Deadwood was of course famous in the 1870s as a wide-open mining town, where Wild Bill Hickok was shot to death in a saloon in 1876. Bass and Collins were even worse gamblers than Wild Bill and soon lost their cash. Robbing stages seemed an easy alternative to the gaming tables.


Unfortunately, they turned out not to be too good at that either. They teamed up with a fellow named Reddy, the Canadian Tom Nixon, a Missouri family man named Jim Berry, and Bill Heffridge, a Pennsylvanian with two wives (neither of whom was in Deadwood). The stage they chose pulled up but the team shied into Reddy’s (stolen) saddle horse and Reddy angrily blasted the driver, John Slaughter, off the box with his shotgun. The team bolted at this, and the stage hurtled into Deadwood with no driver, but passengers and strongbox intact. Company executives nailed Slaughter’s bloody vest to the stage depot door in a gruesome incentive to vigilantes.


Reddy’s partners in the gang, furious, debated killing him but they limited themselves to firing him. The reprieve didn’t do Reddy much good: he drifted back to Texas, to Fort Griffin, and there vigilantes lynched him for horse stealing.


Sam Bass and his gang continued stage robbing. They got $11 from one, a bag of peaches from another. They decided to have a go at trains.


Despite what Hollywood Westerns show, there was in fact a tiny number of actual train robberies in the late nineteenth century West. The Reno brothers carried out the first, in Seymour, Indiana, just after the Civil War, and famously the James gang and Butch Cassidy’s Wild Bunch robbed trains (usually the express car and not the passengers). And by the way, no one actually leaped from a horse onto a moving train so stuntmen would have been out of work if history were followed more scrupulously. 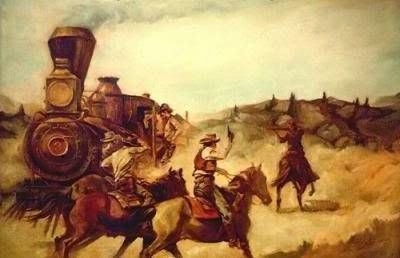 A staple of the Hollywood Western but actually quite rare
Anyway, Sam Bass and his crew had a go, at Big Spring, Nebraska on the night of September 18, 1875. They stopped the Union Pacific and this time they struck it rich. From the passengers (only the men; gallantly, they did not search the women) they got $13,000, four gold watches and a ticket to Chicago. But in the express car they found $60,000 dollars’ worth of new-minted double eagle twenty-dollar gold pieces.


Two of the gang, Heffridge and Sam’s erstwhile saloon partner Collins, were caught and shot to pieces by a sheriff’s posse and a group of soldiers, and one, Berry, was caught later in Missouri when the twenty-dollar pieces he was spending freely aroused suspicion and a posse shot him in the leg with a shotgun - he died of shock. But Sam Bass went back to Denton and lived it up.


He formed a new gang and started in on stages again, but with equal lack of success, so he decided to have another go at a train. The gang got $20,000 from the Houston and Texas Central at Allen in 1878. There was much shooting when they held up the Hutchins train and later the Texas Central at Eagle Ford but fortunately no one was killed. 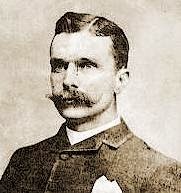 Distinguished gentleman
Bass became famous. The railroads were far from popular and many ordinary Texans were on Bass’s side, providing no help at all to the Pinkertons and the Texas Rangers chasing him. The Pinks and the Rangers were complemented by bounty hunters and unofficial posses out for the reward and centered on Dallas.


Newspapers loved it and referred to “Sam Bass & Company”. They called it the “Bass War”. The multifarious hunters and the Bass gang only clashed once, though, and that was by accident. Sam Bass seemed invisible. 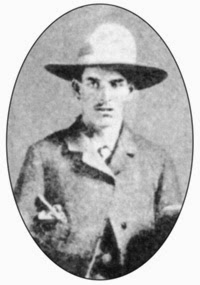 Looks a bit more outlawy
Already in January 1878 a sensational book appeared, the anonymous Life and Adventures of Sam Bass, The Notorious Union Pacific and Texas Train Robber: together with A Graphic Account of His Capture and Death--Sketch of the Members of His Band, With Thrilling Pen Pictures of Their Many Bold and Desperate Deeds, and the Capture and Death of Collins, Berry, Barnes, and Arkansas Johnson. 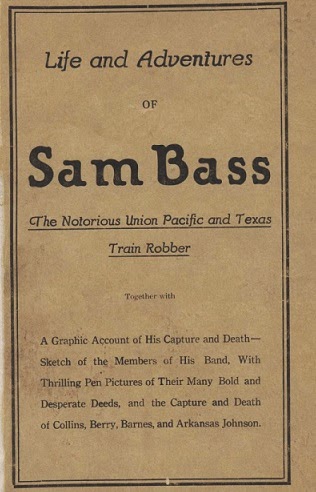 Thrilling Pen Pictures of Their Many Bold and Desperate Deeds
Read it here.


With trains now closely guarded, Bass & Co decided to have a crack at a bank. Sam and two accomplices, Jackson and Barnes, targeted Round Rock, Texas. Unfortunately for them, though, one Jim Murphy finally ratted on them and the Texas Rangers were ready. Ranger Dick Ware was there, later to become a well-known deputy US marshal in El Paso, and Ranger George Herold, also to become an El Paso lawman. It was Herold who would shoot Sam Bass (though Ware got the credit).


Deputy Sheriff AW Grimes put a hand on Bass and said, “Say, Mister, are you carrying a gun?” It was the last thing he ever said. Realizing the game was up, the three outlaws left Grimes's body and raced for their mounts, but Dick Ware shot Barnes in the head and as for Bass, a storekeeper hit him with a lucky shot and then Herold shot him in the back as he mounted. Jackson bravely held up the assault by firing accurately to cover Sam’s escape and the two managed to get away. But Sam was severely, and, as it turned out, mortally wounded.


Jackson got away but early the next morning Bass staggered out of hiding and the Rangers found him lying under a tree. When asked for a confession and information on Jackson, Bass said, “It’s against my profession. If a man knows anything, it ought to die with him.”


Over the next few days Bass gradually began to feel better and it seemed he might recover but then his condition suddenly deteriorated. His last words were, “The world is bobbing around.” He died aged 27 on July 21, 1878, his birthday.


Sam met his fate at Round Rock, July the twenty-first
They pierced poor Sam with rifle balls and emptied out his purse
Poor Sam he is a corpse now and six feet under clay
And Jackson’s in the brushes, trying to get away.


Inevitably, Sam Bass appeared many times in books and on radio, TV and the big screen.


A 1936 episode on the radio drama Death Valley Days concentrated on Round Rock. In a 1944 radio episode of The Lone Ranger he died again. Bass's son was supposedly (and improbably, given Bass's age) the sheriff of Round Rock.


The 1949 Universal movie Calamity Jane and Sam Bass invented a torrid love affair between Sam and Calamity Jane (Yvonne de Carlo). Calamity and Sam were in fact in Deadwood at more or less the same time, so I guess it could have happened, though there is no evidence they ever even met. 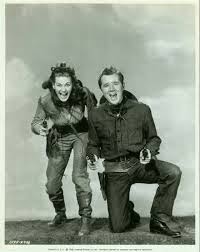 De Carlo and Duff. Oh dear.
In the enjoyable but preposterous 1951 picture The Texas Rangers, Bass heads an unlikely gang made up of The Sundance Kid, John Wesley Hardin, Butch Cassidy and Dirty Dave Rudabaugh. Ranger John B Jones brings him to justice. 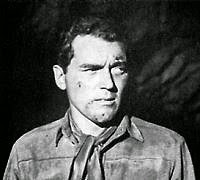 
On TV, Bass was portrayed by Don Haggerty, 40, in a 1954 episode of the Western television series Stories of the Century, which was about as accurate as those shows usually were, i.e. more bunkum. The following year there was an episode titled The Shooting of Sam Bass in the CBS series Tales of the Texas Rangers.


In 1957, Chuck Connors was 35 when he played Bass in Sam Bass in NBC’s  Tales of Wells Fargo, and in 1959 the excellent Alan Hale Jr. (then 38) played Sam in the episode entitled The Saga of Sam Bass in Colt .45. In 1961, Bass was portrayed by Jack Chaplain in an episode of the NBC Western television series The Outlaws.


Wayne Gard wrote Sam Bass in 1969, Bryan Woolley wrote a biography of the same title in 1983, and in 1999 Sam Bass & His Gang by Rick Miller was published. Sam Bass’s career also appears in various collections of Western outlaw books, such as the very good The Shooters by El Paso author Leon Metz, which I have used for this post and to which I am indebted. There are various websites with pages devoted to Bass but I don’t know how reliable they are. Except this one, of course.